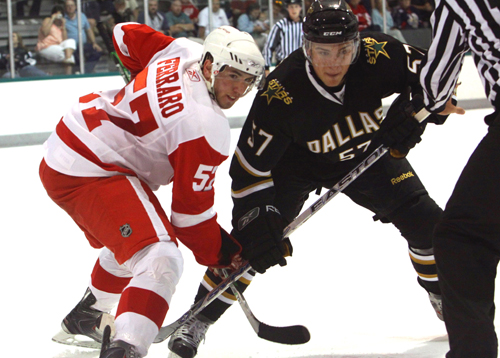 Each autumn since 1997 – except during the year of the lockout — the Detroit Red Wings have held their fall training camp at Traverse City’s Centre ICE arena. For that brief time, Traverse City is transformed into Hockeytown North, where hundreds of fans from the U.S. and Canada come to watch and meet as many as 70 team members in what may be the sport’s most up close and personal series of events.

But hard-core hockey aficionados insist that the real action takes place a week earlier, when the Wings and seven other NHL teams hold their annual prospects tournament in Traverse City  — a four-day round-robin of competition that gives fans a chance to watch tomorrow’s hockey stars in action.

The Red Wings training camp, which begins Sept. 18, features as many as 60 players divided into three separate training teams. During the first three days of the camp, players work out and play intrasquad games, culminating in a traditional Red & White game on Sept. 21.

Since Centre ICE has two sheets of ice, there’s action going on incessantly during the tournament and the training camp, and spectators are allowed to wander back and forth between rinks during the day. Also, the facility has no rules against fans taking their own photographs; in fact, cameras are encouraged.