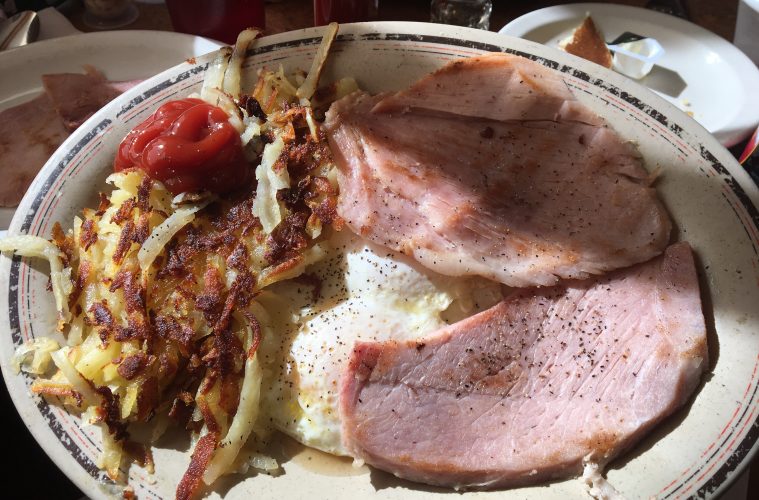 Established in 1975, Betty Ross II is a cozy little countertop diner in Madison Heights that serves breakfast anytime and is known, among other things, for its early morning specials, large slices of ham, and homemade cornbread. And, if you enjoy being greeted like a regular then this neighborhood family restaurant is for you.

On this occasion, my brother Nick woke me with a text that said he was heading to breakfast with our mom and that my wife, son, and I were expected. Having not been to Betty’s for some time, I was excited to order a proper Michigan breakfast.

My wife and I managed to dress, ready our 16 month old in relatively short order, and after I scraped an early spring frost from the windshield of our black, 2009 limited edition, SUV (complete with useless multi-colored interior club lights) we were en route to a late Sunday morning meal.

Parked the SUV, pulled my boy from the bondage of his car seat, grabbed the “diaper” bag, and entered the restaurant to a round of applause and greeting from customers and staff alike. Pulled a high chair up to the booth where my mother and Nick were sipping coffee over plates of food, peeled off the layers of warmth that my son’s mother had wrapped him in, and strapped Andalo into the seat. Hugs and kisses all around, while the family shuffled coats and scarves and handbags to make room to sit. The waitress poured a round of coffee with a smile, playfully engaging with my boy, who I noticed had my iphone in his hands, and continued down the row of booths doing the same. I reached for the phone but little Andalo was quick. He conjured Siri with the Home button and continued touching the screen until my apps were vibrating in wait to be deleted. I reached again but he casually tossed the phone to the floor. After picking it up, before an audience of amused diners, I was able to sit.

Breakfast was served on vintage diner plate ware: two eggs, over medium, ham, potatoes, well done, with grilled onion, and coffee. No toast. My wife Nette ordered pancakes and ham (Forgive me, but I forgot to photograph her meal until she was well into it).

Every item on the plate came out hot and as ordered. Pancakes are thick and flavorful, with that ever so slightly charred bottom from a grill that has been seasoned through the years. I suppose it would be nice if the restaurant offered real maple syrup, but then this is an issue with most family joints. However, the two rather large slices of perfectly grilled, almost caramelized, slightly smoked ham more than made up for it. Eggs were on point. And, the grilled potatoes with onion, and just a dab of ketchup (for color) were a hit with Andalo. A very satisfying meal. In fact, I boxed a slice of ham, one pancake, and half a portion of potatoes for home the next morning.

Service was friendly, quick, and coffee kept coming. The owner stopped by to see how everything was. We had a fine conversation with her, and we laughed at some of the conversation between the regulars, servers, and cooks. It was clear that Betty Ross II is well-loved by the neighborhood.