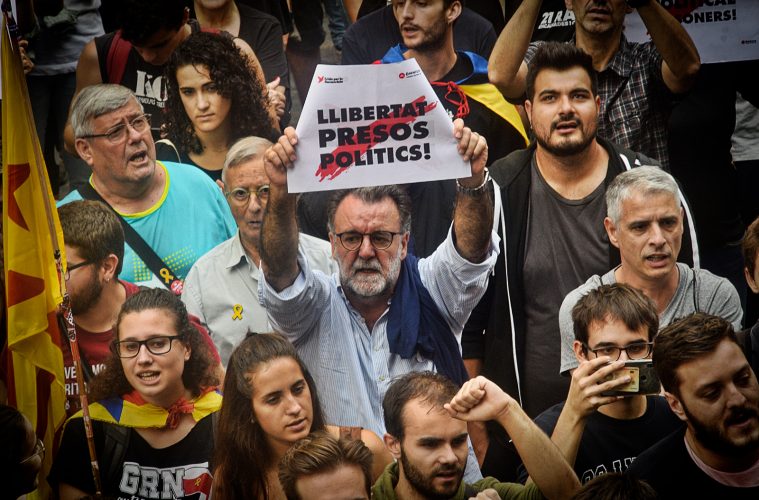 Catalonia, A Long Claim for Democracy to Achieve Independence

The Catalan question comes from a long way back and although it’s tagged as the struggle for an independent state that is more of a symptom than a cause. The root of today’s Catalan issue lies with the need for democracy and justice. Without justice democracy isn’t possible and without democracy auto-determination isn’t possible. Auto-determination could take form within a federation or as an independent state. The exact result is not important to many Catalans as long as the core decision making on the structure of society can truly rest with the people directly affected by it. For Catalonia in modern Spain that has proved to be simply not possible. If Catalans in recent times were to have felt comfortable with the possibilities of the democracy and justice being offered to them within Spain, then what is happening today, filling television screens with mass demonstrations and unrest on the streets, most likely wouldn’t have happened.

Catalonia is located at the crossroads of the north and south, east and west of southern Europe with ancient sea access to the Mediterranean. The location has brought many peoples to the land over the centuries, many of whom have stayed, and has proffered inquisitiveness and business sense when considering new projects and new ways of building society. Catalans on the whole are amiable enough, hard-working, project-minded and stubborn to a degree. Catalonia has its own language and its culture brims with participative activities often rooted in centuries, that have built a cohesive spirit and understanding of identity.

Catalonia lost its ability to decide for itself about 300 years ago after a hostile takeover by a Madrid managed Spain. Since then it has been kept under control by whatever means have been available. In the olden days that might have included the occasional shelling of Barcelona and the odd well placed execution. In [very] recent times it has not been so easy to simply execute troublemakers so those in control have needed to resort to other means.

In 1978, a period known as the ‘transition’ after Franco’s death, there was a flurry of hope for a new combined project of Spain. Many Catalans had believed that it could be the start of a new and participative federation but that hope has faded; in the minds of many Catalans the transition has failed. It should have opened the doors upon which to build a progressive and modern, plurinational Spain. The result has not responded to that vision. Many consider that the clauses of the constitution founded in that first phase of transition have been used to close doors rather than open them. Besides possible limits imposed by the constitution itself, the interpretation of the constitution has been in the hands of judicial institutions that were never overhauled during the transition. It has been business as usual for a judiciary, politically positioned and working with the same rule book written for and by themselves during the forty year dictatorship. 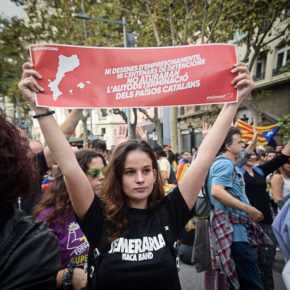 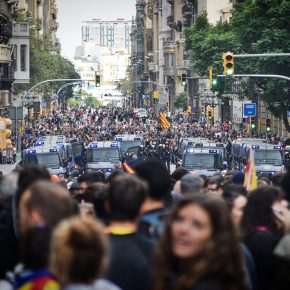 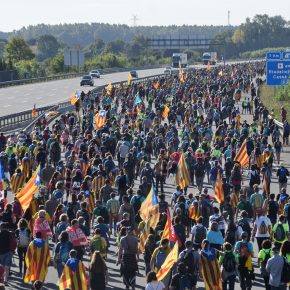 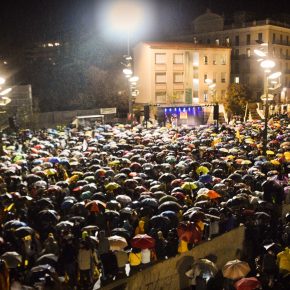 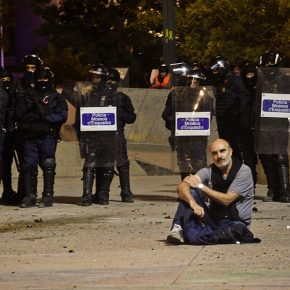 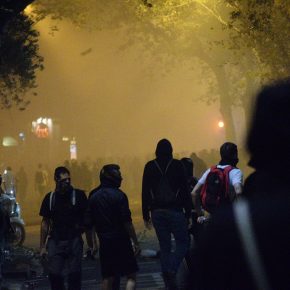 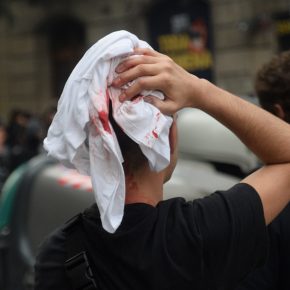 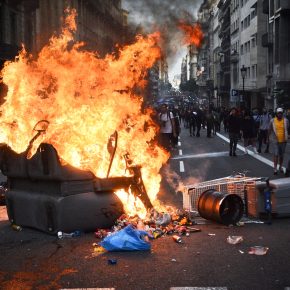 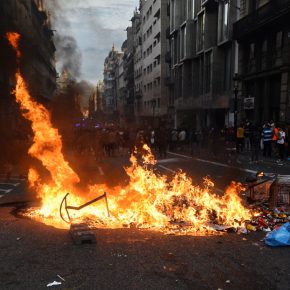 In the mid 2000s, culminating in 2006, the Catalan government agreed to a new statute with the then socialist government. The statute recognised new powers for the autonomous region and even recognised Catalonia as a nation. It was positively voted by the governments in Madrid and Barcelona and taken to referendum in Catalonia. It was voted in by 78% on a lukewarm 49% turnout. What came next broke, possibly irretrievably, the status quo.

A major party on the right in Spain, the PP, promoted a petition around the state for votes against the new Catalan Statute. They then appealed to an arguably partisan 12 member, Spanish Constitutional Tribunal against many clauses therein and won their rejection. At this point what many consider an illegality took place, the statute was considered passed in its watered-down state, signed and sealed; it should really have been passed back to the Catalan people for a second referendum but wasn’t. Many in Catalonia considered the contract broken, they had played the game by the rules and the rules had changed during the game. If a people and parliaments voting can’t decide the content of a statute and constitution then the system is not democratic. That led to the year 2010 and the first of the massive, peaceful demonstrations by Catalans.

A period of friction followed. The PP had taken majority control in Madrid and the Catalan government lived a state of stiflement. Those years coincided with a steep economic downturn and a feeling of unfair economic treatment for Catalonia. Those in favour of Catalan independence had grown from around 15% of the electorate to more than 40% in two or three years. The friction between Madrid and Barcelona worsened. Catalans were taking to the streets in massive and innovative demonstrations every year with often more than a million participants.

The Catalan government took heed of the people on the streets and, after one last failed attempt at a financial agreement with Madrid, started to make plans for independence. The first initiatives came in the form of unofficial local votes, then a major non-binding referendum, organised by the Catalan government in 2014. During the entire period of these later years, Madrid had offered nothing; their view remaining steadfast with the indissoluble unity of the Spanish Nation. A perception in Catalonia of ‘cede nothing to the Catalans’.

On 1st October 2017 more than 2.2 million people voted in a referendum offered as binding by the Catalan government. Madrid responded with riot police and paramilitary Guardia Civil, raiding voting centres throughout the day, often brutally forcing their way through cleverly passive citizens to snatch voting boxes. The voters were aware that they needed to remain non-violent but many fell victim to injuries as they were thrown or dragged aside. It was a day that will not be forgotten by many Catalans.

2.28 million people voted and the result was 92% in favour of the question: “Do you want Catalonia to become an independent state in the form of a republic?”. The then president, Carles Puigdemont, and his government reacted to the result by pushing for dialogue with Spain. The dialogue never happened and a symbolic vote of Independence was approved by a vote in the Catalan parliament on the 27 th October 2017. Significantly, it was not entered into the official book of records and was thus not validated and neither was the Spanish flag lowered at the Catalan parliament. The next day Carles Puigdemont and several members of his government left the country for Belgium. They have not returned since then and no extradition orders by the Spanish government have succeeded so far. Belgium, Germany and Switzerland do not see the crimes of rebellion and sedition that Spain cites as having been committed.

Seven of the members of the government that stayed and two leaders of social movements were imprisoned for two years awaiting trial for rebellion, sedition and misuse of public funds. Although both rebellion and sedition require violence [of which there was none on behalf of the independence movement], all nine accused were found guilty of sedition and several of misuse of public funds and have been sentenced in October of 2019 to between 9 and 13 years in prison.

The Catalan people are outraged. The evident manipulation of justice for political interests has confirmed what many in Catalonia already knew; that Spain is not their country. There exists a general feeling that a state that treats its citizens in the way that Spain has treated the Catalans does not deserve their loyalty. The anger has come out onto the streets via the typical Catalan way of doing things, massive and peaceful demonstrations, but a new element has appeared; the young generation that first experienced contact with the Spanish police in October 2017 have now taken to the streets in a way not seen before. No fear and no respect for the forces of order ushered in by Spain.

Joan Aureli Martí is based in Catalonia and involved in social and political organizations in the city of Girona, as well as in the rest of Catalonia. As a photojournalist he collaborates with a number of media outlets.