In the 1930s there used to be a huge arrow sign atop Detroit’s Penobscot Building pointing to “Ford Field” in Dearborn. The air piloting aid directed early aircraft to aviation’s first modern airport, equipped with two grass runways, equipped with floodlights for night landings.

In 1925, Ford Air Transport Service between Dearborn (Detroit) and Chicago began. The years 1928-29 saw the paving of Ford Field’s runways, in concrete, the first concrete paved runways in the world. In 1947, the Ford Air Transport Office moved to Detroit Metropolitan Airport. The site of the old Ford Field was closed and it became the Ford Dearborn Development Center. 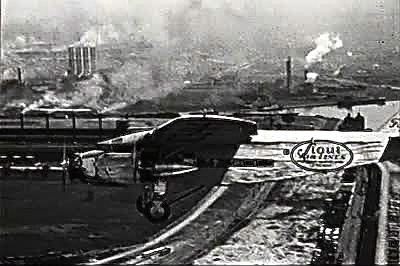 A plane flies over Detroit in the 1930s

In 1927, Wayne County began to plan an airport in the western townships. The following year the county board of supervisors issued a $2 million bond to fund the purchase of one square mile of land at the corner of Middle Belt and Wick roads, the northeastern boundary of today’s airport. Construction of the airport was completed in 1929, and the first landing was February 22, 1930.

Wayne County Airport was formally dedicated on September 22, 1930. From 1931 until 1945, the airport was the base for the Michigan Air National Guard. It was also named Romulus Field during World War II. Between 1947 and 1950, county officials expanded the small airport to become Detroit’s primary airport. The airport was renamed Detroit Wayne Major Airport in 1947, and over the next three years expanded in size threefold as three more runways were constructed.

Over the years, several historical terminals were built. They are:

Named after a former airport commissioner, this terminal was designed by architect Louis (Louie) G. Redstone and was opened in 1974 as DTW’s International Terminal. (A historical note: Albert Kahn was the architect for the buildings at the old Ford Field.) The Berry Terminal was decommissioned in 2008, and replaced by the North Terminal.

The Smith Terminal was named for Detroit Wayne Major Airport visionary Leroy C. Smith and was constructed in 1958.

This is the oldest of the terminal structures. Many people asked, “what is that old building?” The structure was constructed in the late 1920s, and today it is the home of ASIG, a flight support company.