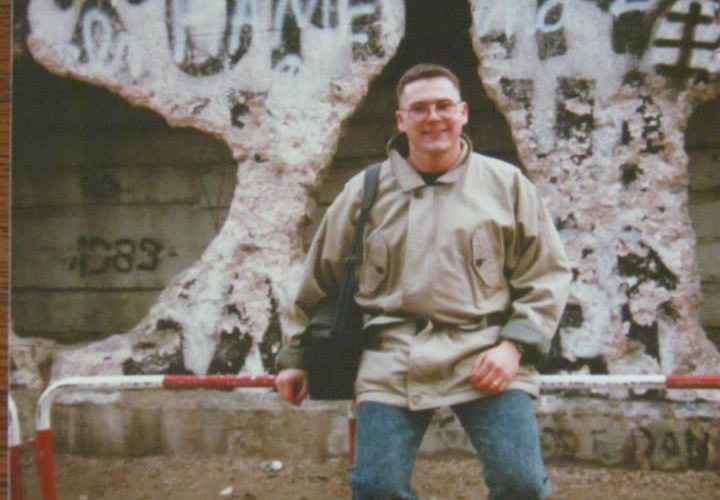 German Reunification and the Memories of a Cold War Soldier

I arrived in the Federal Republic of Germany (more commonly referred to as West Germany) at the height of the Cold War in April 1988. Mikhail Gorbachev was the leader of the Soviet Union and instituted the policy known as “Glasnost” which gave those in the Soviet Union more freedoms but they were still very much trapped behind the “Iron Curtain. Things were stirring behind that curtain. Poland was in the midst of general strikes while other satellite countries such as Hungary and Czechoslovakia were seeing more protests against Soviet domination. Something was happening in Eastern Europe but for the US military nothing had changed.

From the minute I touched down at Rhein Main Airbase near Frankfurt you were told your mission was to stop the Russians from pouring through the Fulda Gap with Tank and Mechanized Infantry Divisions. I was assigned to the 3rd Military Police Company of the 3rd Infantry Division in Wurzburg. As an MP I had two main duties, one as a Policeman and two as a Combat MP. When we weren’t patrolling the Kaserns (bases) in and around Wurzburg we were training for our combat mission. At least once a month at O’dark thirty hours, we’d be alerted and would rush to grab weapons and vehicles and reach our predetermined combat positions in the direction of the border between East and West Germany.

Don’t get the impression that it was a tense existence because it wasn’t. Duty in Germany was fantastic. The country is beautiful, neat, orderly and the people can be warm and generous once you get to know them. Life as a soldier in Germany was great but we always knew that things could change in a heartbeat.

In the Spring of 1990 I was able to tour Berlin. It was an Army sponsored tour that took soldiers at no cost to Berlin. The city was still divided into four parts each controlled by a country, Soviet Union, United States, France and Great Britain. Technically we were still allies in Berlin. The three Zones controlled by the Western Powers were free while the Soviet Zone was not. In the weeks leading up to my trip, things changed quickly. Frustration with decades of Soviet control were boiling over. The East Germans had had enough. They began to hack away at the wall dividing Berlin and to their surprise no one shot them. So when I first saw the wall it had changed. 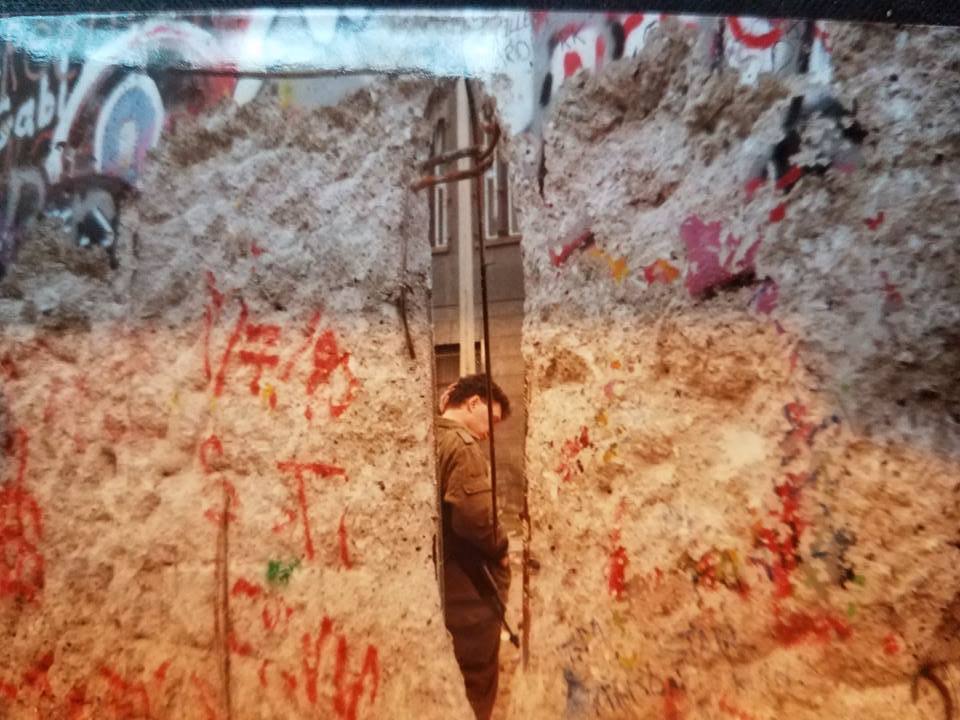 There were large holes in it so that you could see through to East Berlin. Chunks of it were missing everywhere. I came upon such a hole and through it stood an East German Border Guard, AK47 Rifle slung over his shoulder pointing down towards the ground. Smoking a cigarette he looked bored. I snapped a shot and to this day it’s one of my favorite pictures. 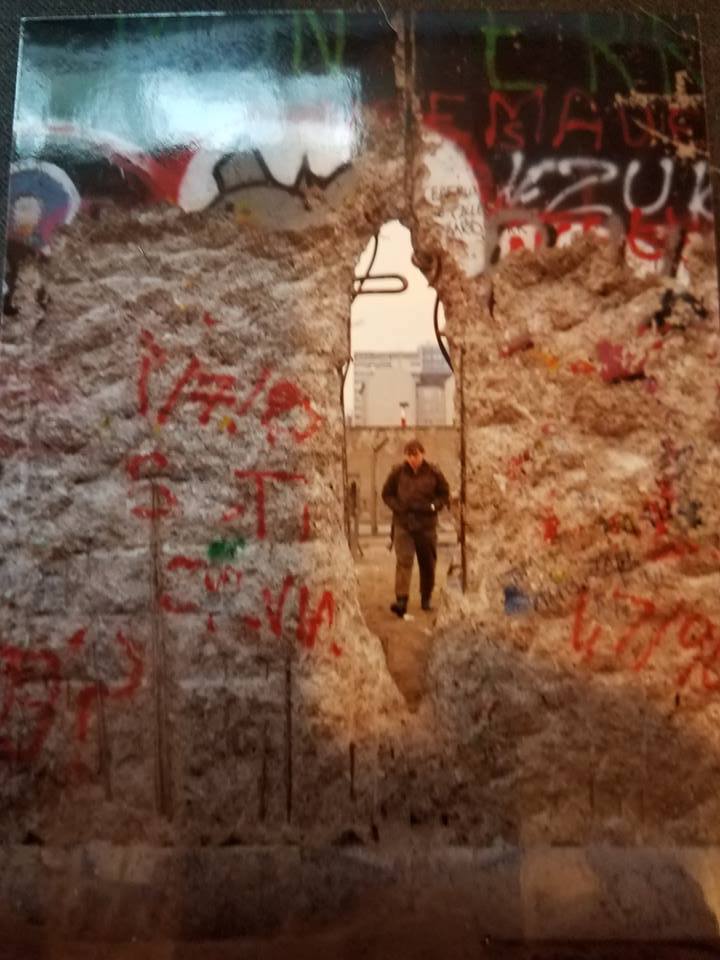 The next day dressed in Class A uniforms we toured East Berlin. Compared to the West side it was drab as if only that side was cloud covered and dark. We visited Soviet museums and monuments as well as shops where we were asked not to buy staple goods as supplies were severally limited. I bought several bottles of Russian vodka. We were told supplies of vodka were always in the full.

Shortly after my trip it was announced that there would finally be a reunification of the two Germany’s. The entire world was changing fast and luckily I was there to see much of it and on October 3rd the two countries reunited.

This was a huge day for Germany and a huge day for the world. I had to see it in person. So myself, wife Sandy and our good friends and neighbors Denise and Stephen (married, Stephen and I were in the same platoon) piled into my 15 year old Audi and pointed it toward the former border. I can’t recall exactly how far the border was but I think it was within an hour. My Audi was held together by a combination of 100MPH tape, prayers and profanities. I wasn’t entirely confident we’d make it there and back.

We jumped on the Autobahn and almost instantly we started passing tiny little cars called Trabbis heading West having just come from the former East Germany. Though I shouldn’t have been, I was surprised to see so many former East Germans pouring into my side of the border.

Reaching the border we were met with huge fest tents that seemed to have sprung up spontaneously. The gun towers that used to shoot fleeing East Germans were now converted into party shacks with people piled on top hoisting beer and toasting one another. It was tempting to stop and play but it was getting late in the day and we wanted to see the real East Germany. We’ve watched movies and stared across barbed wire fences but never had we actually been there. So we drove deeper into the country side.

Honestly I don’t know how long or how far we drove but I remember taking in all of the stark differences between the two Germanys. The West was rich, well put together, every house and building immaculately kept with flowers and fresh paint. The East not so much. Everything was grey. The houses, buildings even the flowers seemed to be grey. The East relied heavily on coal for electricity and even to warm their homes. Combined with the overcast day, East Germany on that day seem to be in monochrome grey.

We had no destination in mind. We knew almost nothing of this part of Germany. I think we had a road map and that was it. We picked a town and drove. The air was cool, almost cold. It looked like it would rain and the sun was setting. Just before reaching the town, we began to see hints of what might be a military base. A vehicle here, a sign in Russian there until finally soldiers! Russian soldiers!

We passed a few walking on the side of the road that must’ve been to a Soviet Artillery Range. Now, we had no guidance from our command about driving into former East Germany but we had clear orders about what to do if in contact with a Russian soldier, which was essentially, do not approach, do not communicate, record and report everything. But we had to. The world was changing. The Cold War was coming to an end and here’s our chance to meet our soon to be former adversaries! 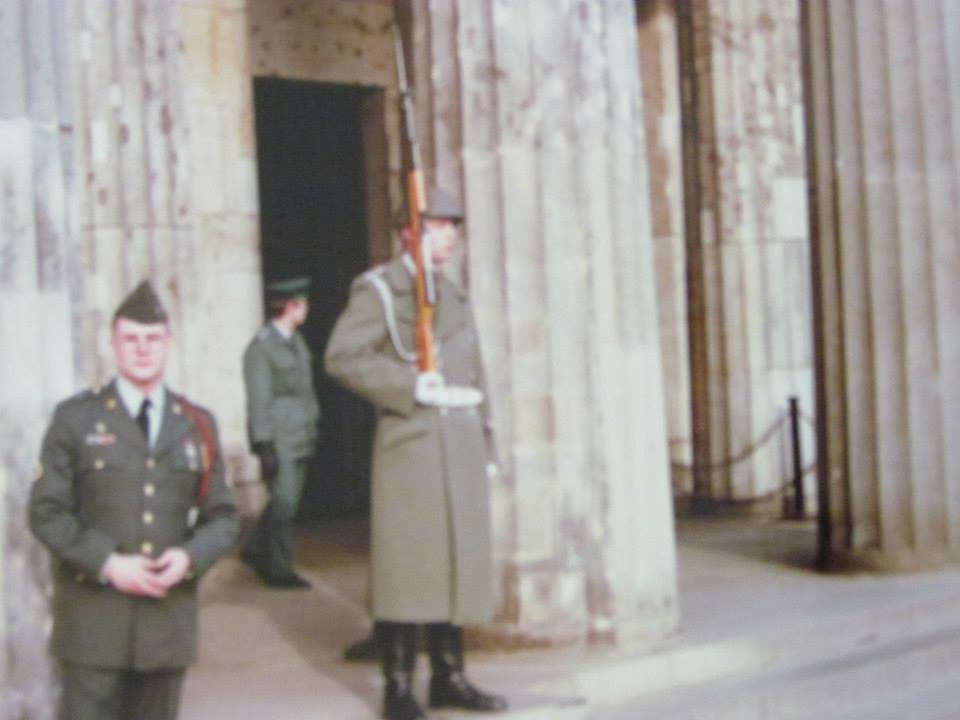 We slowed the Audi and passed more and more small groups of Russian soldiers. We spied three and pulled over. Stephen and I got out and approached the trio. As most soldiers they were young, about our age. Thin, almost gaunt. Kind of dirty, as soldiers often are, but to me this wasn’t training dirt: it was more like they didn’t have the opportunity to bathe or do laundry.

Over their uniforms they wore tattered, colorful civilian sweaters, as if they weren’t given the proper gear to keep warm, so their superiors allowed it. I don’t recall the first words spoken, probably “hello”, as most people around the world know this English greeting. I do recall deep hesitation, almost interested fear. From their insignia and mannerisms it was clear one of the three was the leader, most likely a lower enlisted non-commissioned officer the equivalent of a Corporal or Sergeant. The other two most likely lower enlisted, like a Private. The sergeant seemed most aware, as it would be his ass on the line if any rules were broken, and I’m certain there were. The two privates were more relaxed, inquisitive. They didn’t speak any English, we no Russian, but all of us knew a little German.

In limited German we exchanged names, talked about the reunification and made small talk. All along the Sergeant was uneasy. He looked around to see who was watching. It was clear he was uncomfortable and wanted to leave. In this moment of international soldiery (is that a word?) diplomacy we knew we had to leave them with something from the West. I dug into the truck of the car and grabbed the two things I thought they’d appreciate; an Elton John cassette and a can of Orange Crush. In return one of the Russians gave me a medal from his uniform. Then Stephen did something that shocked me.

Now, understand that between the two of us, I was definitely the risk taker; the rule breaker. Stephen reached into his shirt and pulled off his dog tags and gave them to one of the Russians, who in return gave Stephan a medal. This FLOORED me! In that time and in that place that was inconceivable. In the end no harm was done. Good for Stephen.

Sitting here today 28 years later, it’s hard to understand the significance of that moment for us. The world was changing and changing fast, and we were witness to it. We met the very men we trained to kill and they were like us. They were kids playing a real life game of GI Joe. I know that when we got back into the car it felt as if 50 years of the Cold War was melting.

The ride into town was thrilling. We all felt it. It was dark and we were hungry. We found a Gasthaus, a restaurant. Walking in all eyes fell on us. Clearly we stood out, as we may have been the first Americans to have ever been there. The menu was limited but we didn’t mind. Schnitzel, spatzle and good beer.

The years are falling away for this Cold War soldier but I’ll never forget those days in Germany when the world changed, and we with it