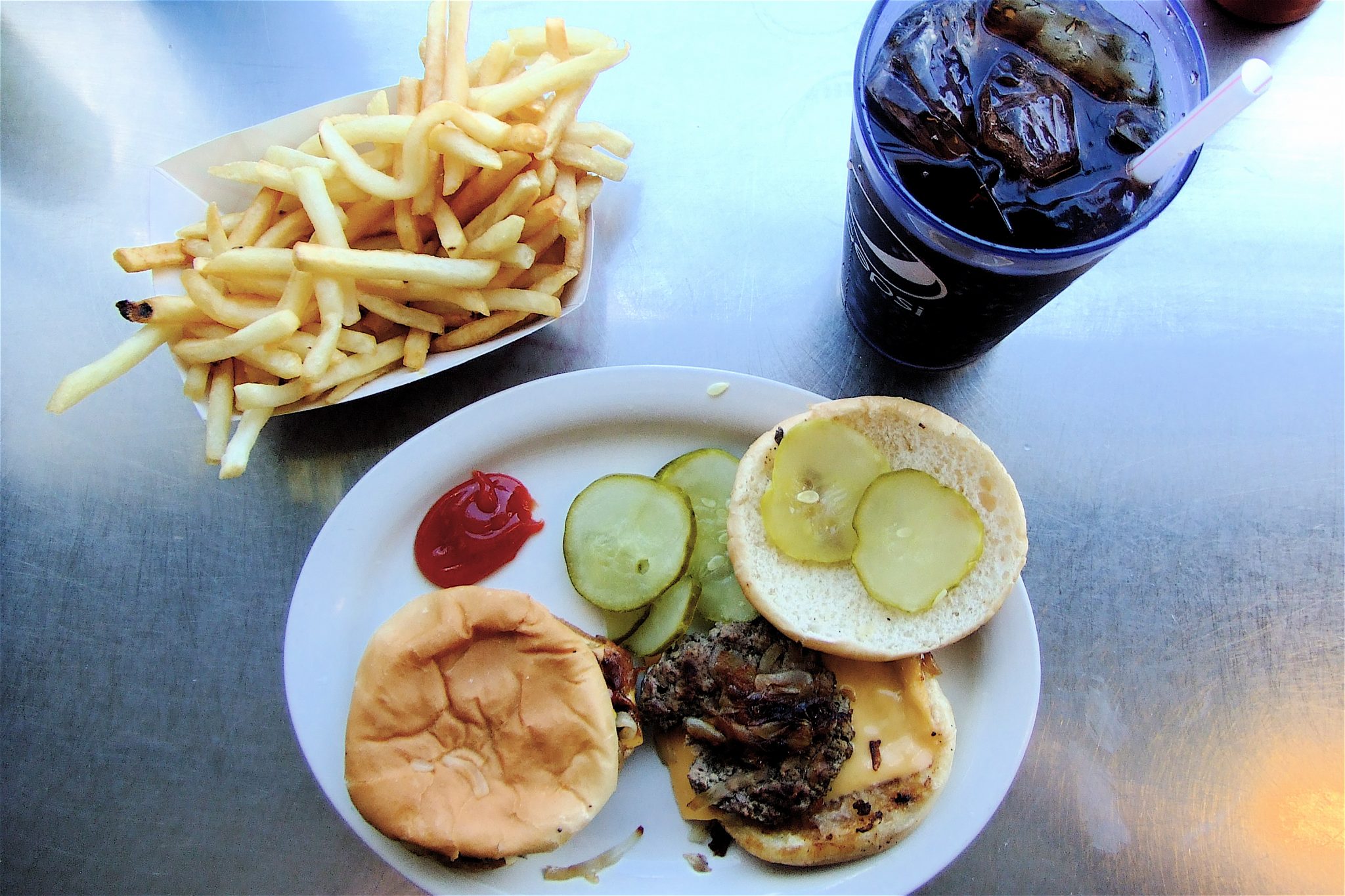 Little burgers, belly busters, sliders, however you like to describe your grilled meat between a bun, the following 4 establishments have been serving Detroiters these classic burgers (usually with a side of fries and a pop) for decades. Guaranteed to put a smile on your face, maybe an inch on your waist, but leaving you with nothing but good memories.

Good pickles, sweet buns, countertop facing the king of all highways, what more could you ask for?  After all these years, the flavor is still there, though the meat itself seems to be a bit lighter than I recall. American rock-n-roll on the juke, good fries, nice atmosphere – I like the way they slid in a pair of tables – a clean, bustling landmark, modern and nostalgic at the same time. Pure satisfaction, with one caveat: Pepsi, instead of Coke, for those who care. CASH ONLY!

Rumor has it: The city has been threatening to tear down Hunter House in order to build a hotel. Get there before the wrecking ball.

An amalgamation of 50’s, 60’s, 70’s and 80’s burger joint culture, Comet Burger opened during the rebirth of Royal Oak, serving the indie rock, late nite, after bar set and continues catering to that crowd. Golden brown fries, good meat – on a slightly over steamed bun – with a glass of Coke. The issue here is that the place seems a little worn from years of hungry bar rowdies. Instead of wiping down counters and walls, the day server preferred to dog the owner, before hustling me for a $3 tip on a $6.50 tab – “Are you guys good?” she said, smile on face, cash in hand, proving good help is hard to find. 2 burgers, fries, $4.75 between 11am-4pm. Cash/credit.

Earl Owens established the original TelWay on Grand River & Telegraph in 1944, later opening the John R. & 11 mile location. Son, Allen, took over and it looks as though daughter, Ali, will be carrying on the family tradition.  Good burger – melted cheese beautifully keeping it all together – grilled onion, pickles, with golden brown fries. Served with Coke. Allen Owen runs a clean, tight ship, famous for his mantra, “You got time to lean you got time to clean.” In fact, some of America’s finest, members of the U.S. Navy, entered in their Whites to enjoy a round of burgers, coneys and fries. Real life Americana! 4 burgers to go, $2.89, and the only .35 cup of coffee this side of the 60’s.  Open 24/7, closed Christmas. Cash only/No Canadian money! Says Bobby Crash, self proclaimed burger chef extraordinaire, “We used to have a credit card machine but we got rid of it.”

Though its passed through a few hands, the current crew at Bray’s have done a fine job grilling burgers. Good, solid meat, gloriously melted cheese, pickles, grilled onion all working in concert, while respecting what one another brings to the bun. Owner, Kec, who bought the joint 15 years ago, says, “we grill our burgers here, not steamed, like TelWays, it’s better for you.” I don’t know about that, but it certainly tastes good. Wavy fries and Coca-Cola round out this combination. 6 burgers, $6.95, .99 burger Wednesdays, breakfast anytime. Home of the “Belly-Buster”, Bray’s asks that you “Please pay when served” and place a 2 hour time limit on coffee drinking. No Public Restrooms.