The first are the utterly dismissive skeptics. These people are so impressed by the flawless curvature of their cold logic that they never get around to seeing how badly they’ve warped the openness of their minds and their imaginations. These people are no fun. You buy insurance from them, but you don’t invite them to parties. Especially not bachelor parties.

The second type are … well, a little too imaginative. They accept anything and everything as far as theories and postulations go. They complain to ancestry.com when Martian DNA doesn’t show up in their family tree. They think Procter & Gamble killed Kennedy. They talk too much about ectoplasm. In fact, they talk WAY too much about ectoplasm. These are the people you avoid at parties. And yes, sometimes you change your phone number.

Then there are the people who fall into a third category … the category that falls perfectly between the two we’ve just described. John E.L. Tenney belongs in this category.

Tenney ain’t afraid of no ghosts and he is neither afraid nor ashamed of the weird. He embraces the weird. A discerning scholar who has forgotten more about the strange and the uncanny than most people ever got around to learning, he willingly suspends disbelief until either a rational explanation or … something else places a matter under discussion in a suitable frame of reference and investigation.

Tenney has a popular website called weirdlectures.com. He may be one of the few people we know who has made the podcast an entertaining and intellectually engaging medium. He is an eagerly anticipated guest at both conventions and “coms” throughout the Midwest. He’s also a pop culture enthusiast and an ardent admirer of what Hollywood and television once furnished to a nascent generation of people like … well, like him and (hopefully) you.

John E.L. Tenney will be at O’Mara’s on October 30 with Terrifying True Terror Tales from The Realms of The Weird.

And this very busy man (it IS Halloween after all) found the time to sit down and talk. 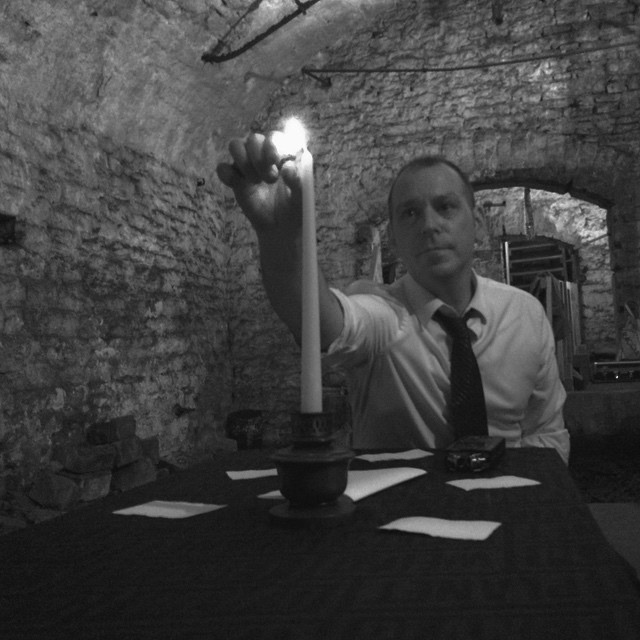 We know there are certain descriptive terms and labels that you prefer not to hear, so when people ask the inevitable and inescapable question, “What exactly do you do?”, how do you answer?

Most people use the commonly heard phrase “Ghost Hunter” when describing what I do for a living but I usually say that I am a lecturer and investigator of anomalistic phenomena. Even using the term “paranormal researcher” is problematic due to the popularization of “ghost hunting” reality TV shows. I investigate any and everything which falls under the blanket description of “strange”. Ghosts, monsters, secret societies, conspiracy theories and UFOs, if it’s weird it’s on my radar.

When led to this personal interest becoming a focused and public pursuit? Have you always been interested in subjects that ripple the fabric of placid realities?

Growing up in the punk community in Detroit in the 1980’s really helped to inspire me to challenge generally accepted ideas concerning our seemingly shared reality. I started my journey by exploring the formation and evolution of conspiracy theories like The Haymarket affair, the JFK assassination, and the Gulf of Tonkin incident. Soon afterward I realized that performing public lectures led to larger exchanges of information with greater numbers of people which allowed me to construct ideas which I could have never done alone. As I shifted my research direction into “weirder” concepts I grew to understand that public displays of ideas were a necessity in building better understanding about the seemingly unfathomable.

Are there people who came before you whom you would name as major influences or inspirations?

When it comes to anomalistic, (paranormal) thinking I find myself drawn to the originators of modern psychical research. Eleanor Sidgwick, Edmund Gurney, Frederic W. H. Myers and Richard Hodgson

You balance an open mind with a sharp degree of skepticism – and you’re not afraid to lighten a topic or subject with a healthy dose of humor. Is there a greater degree of satisfaction in debunking a supernatural case/incident or lending more credence to it?

Researchers in this field should never be afraid to point out when something is explainable. Satisfaction comes not when a case is proved real or false but in seeing growth intellectually or philosophically within yourself and the people you are dealing with.

Okay, the other inevitable question: Was there one single experience in your life that you would without hesitation describe as an encounter with the supernatural?

When a “supernatural” experience is happening it is real. It becomes supernatural only after the experience is over. I’ve been to exorcisms, explored allegedly haunted locations all over the world, tracked monsters through mountains and swamps and have seen unexplained lights in the sky and all of the weird things that have happened in those moments were real, while they were happening. As soon as they were over I doubted if it were anything worth speaking about. So the answer is there is no one experience except the single combination of the thousands of experiences.

You’re an avid lover of movies and you surprised us recently when you said Hereditary was “good – until the end.” What disappointed you during the final minutes? And what film or films would you cite for serious (as well as entertaining) perusal?

I liked Hereditary in that it made “ghosts” look like “ghosts”, but I feel like at a certain point concessions were made in order to explain the narrative to viewers which to me made me feel like they “dumbed down” the ending. Recently I’ve told friends to watch, The Ritual, The Witch and A Dark Song…but nothing really beats the classics like The Black Cat (1934) and Doctor X (1932).