QUEEN | News Of The World
Freddie Mercury boldly opens Queen’s 1977 classic News Of The World with unparalleled bravado singing, “Buddy you’re a boy, make a big noise, playin’ in the street, gonna be a big man someday” as if he’s both extolling the virtues of karma and bitch slapping non-believers at the same time – ‘Don’t fuck with the rock Gods,’ says he. The antithesis of Bohemian Rhapsody (1975), arguably one of the greatest songs of all time, and certainly one of the most recognizable, We Will Rock You exploded over FM airwaves with such confidence that it shook the world. A full two years prior to Grandmaster Flash and the Furious Five’s Superrappin’, the flamboyant frontman is tellin’ it like it is in a cappella against a rhythmic drum beat and set of hand claps. Almost 35 years later and we’re still chanting to this tribal anthem – and it’s yang We Are The Champions – in sports coliseums all around the globe. News Of The World is cut deep with the explosive Sheer Heart Attack, Spread Your Wings, drummer Roger Taylor’s extremely funky, Fight from The Inside and the highly underrated It’s Late; all lost jewels in this 4x Platinum LP. Queen has inspired the Smashing Pumpkins, NIN (who covered Get Down Make Love thirteen years after it’s release) and most recently, Muse. Surprisingly modern, spin News Of The World anytime, day or night, in the car, poolside, or at your next listening party. Queen will, in point of fact, rock you.

SMASHING PUMPKINS | siamese dream
Big sonic flourishes, beautifully arranged and layered guitars soaring majestically over abstract rhythms, and introspective lyric meld together in Smashing Pumpkin’s fairytale release, siamese dream (1993). Simply put, this CD explodes with sound! One of the 90’s most important and exciting albums, Billy Corgon led his band of emotional disparates down the rabbit hole and back again, offering listeners eargasm after eargasm, while never losing touch with the simplicity of song. Heavy, romantic and filled with themes we have all experienced. Girls get your bikinis and boys start mixing drinks; few CDs set the mood for summertime fun better than this. And, if you’re one of those who grew up with the Pumpkins, then suddenly became too cool for school, go back this summer and relive the siamese dream. 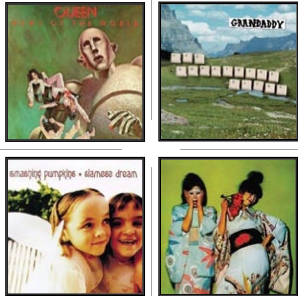 GRANDADDY The Sophtware Slump                                                                               Best heard between sun up and sunset, preferably in a moving vehicle, windows and/or top down, near the sand and sea, Grandaddy is here to assist in leaving the world behind. With The Sophware Slump, released in 2000, it’s better still to pop in Jason Lytle and the boys as you tour the northern regions of Michigan lakes and dunes. Make sure to hit all the happy hour bars you can, and if you’re able to get a script for medicinal purposes,even better. Now, pull up on the beach and head down to the water. Give yourself a good view. Put your headphones on and start from the beginning. Track 01, He’s simple, He’s dumb, he’s the Pilot, is an 8:52 mesmerizing tune that will enlighten as much as it will entertain. From then on, laughing and crying, you’ll float through an intimate journey of love and technology gone awry. You’ve heard Grandaddy on commercials, though you may not have known it – hopefully Lytle cashed in the way his records should have – and now summers won’t be the same without their easy brilliance.