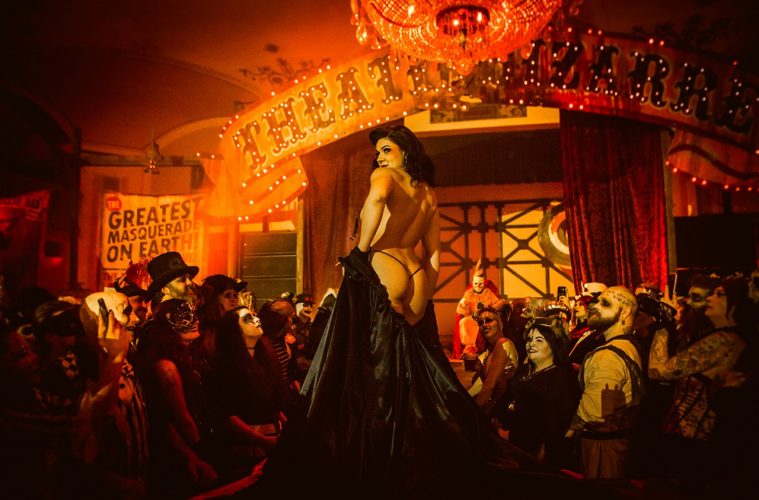 A million words (by our estimation) have already been written about Theatre Bizarre, so any further words would probably be redundant, right?

But the best love letters are usually redundant in one way or another. And we don’t think Trever Long, the subject of this article/ interview, will object to a paragraph of modest passion and praise for one of the city’s most beloved parties.

Theatre Bizarre is Detroit’s autumnal answer to Mardi Gras and other regional fests. It’s a rock ‘n’ roll Walpurgisnacht. It’s the best prelude to Halloween you could ask for – outside of a caramel apple with a dash of absinthe, of course – and a satisfying trip thru the looking-glass. It is Poe and a host of other literary ghosts who saw the masquerade as the best metaphor to convey our collective lies, truths, and dreams. It’s precisely the sort of shindig for which an edifice like the Masonic Temple was intended. It is, in short, a hell of a lot fun!

But most importantly it is also an explosion of color and fire provided by a remarkably eclectic army of talented men and women. Artists, musicians performers, technicians, makeup artists, and (yes) enthusiastic guests who never fail to contribute their own energies to the proceedings.

And Trever Long? For a decade this talented photographer has brought his eye and his camera to Theatre Bizarre. His photos number in the thousands and a great number of them have been used to chronicle the evolving vision of John Dunivant and others. He went this year and he’ll undoubtedly be going in 2019. Shortly before the penultimate show, he answered a few questions we put to him about capturing the imagery of Theatre Bizarre. 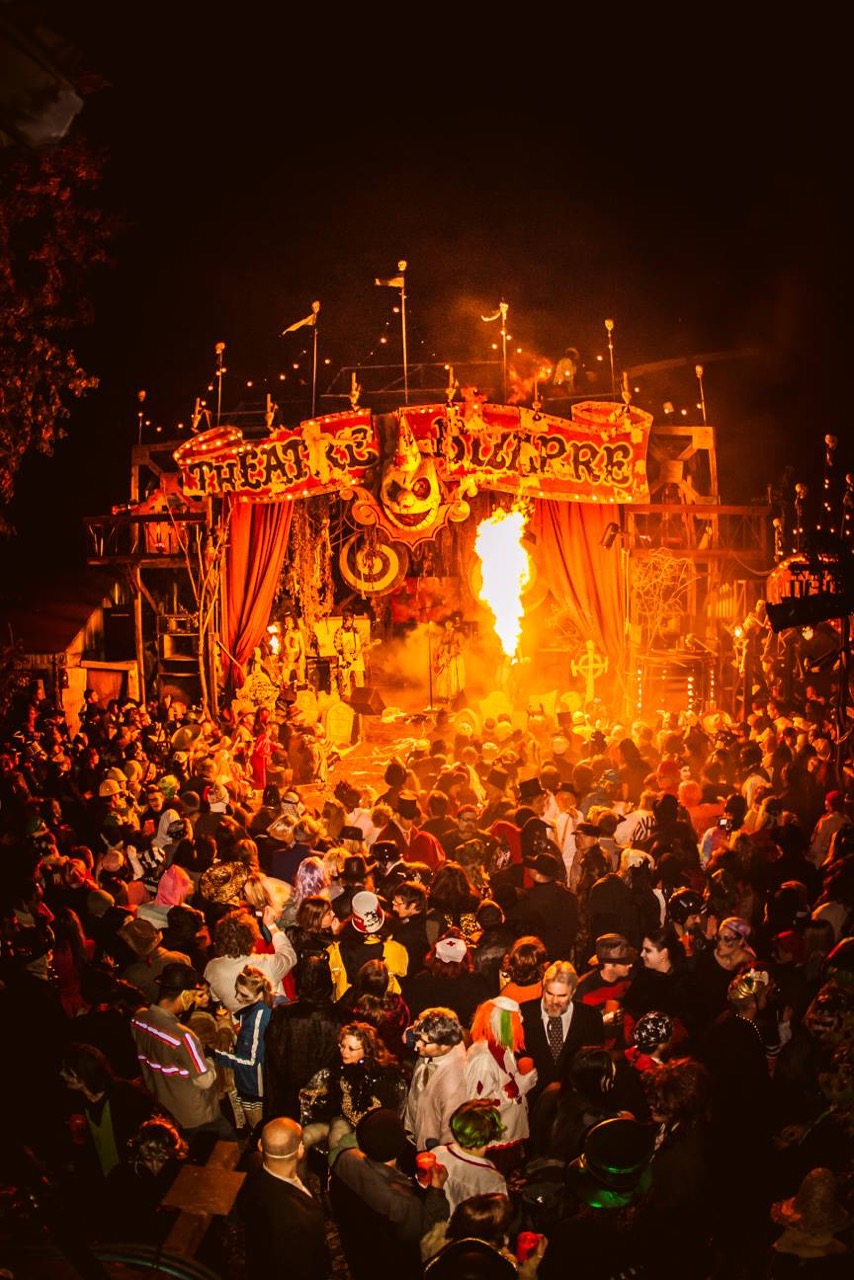 Ten consecutive years! What do you recall most  from your very first photographic experience at Theatre Bizarre? This would be (we presume) 2008?

Yes, this year was my 10-year anniversary of shooting the event. The first time I attended was in 2008, back when it was on the original grounds on State Fair and I had absolutely no idea what I was getting myself into. I’d been asked by Friends of Dennis Wilson (a band I was close with that was playing that year) if I’d be interested in shooting them at a “backyard Halloween party.” I saw the flyer for the event (which features a beautiful illustration by the creative visionary behind Theatre Bizarre, John Dunivant) and I was sold.

I went to the party alone that night and was pretty unfamiliar with the area, so when I walked up to a line of people standing in front of what appeared to be an abandoned building in a burned out desolate neighborhood, I felt a bit uneasy. Honestly, my first
thought was that I went to the wrong address, but the people there were wearing costumes and I could hear music beyond the houses. For those who don’t know, I should mention that in order to enter the party at that time you had to walk through this house, which had been converted into a full-scale haunted mansion. After pushing thru body bags and passing by a rotting pig’s head in the kitchen, I found myself feeling my way through a nearly pitch black underground tunnel that was plastered with a child’s drawings of murder scenes, until finally emerging into a cloud of fog.

Once it cleared, my vision focused and I realized I was suddenly standing in the middle of a bustling 19th century carnival midway, complete with banners for sideshow freaks. So yeah, it made a pretty strong first impression. It felt like I’d walked into a dream. It was incredible, it was dangerous, it was beautiful. That night would be the first time I’d photograph and see performances by acts like Snakeout, Satori Circus, and of course, the Queen of the Cooch herself, Roxi D’lite. I was hooked. 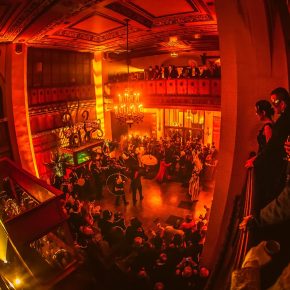 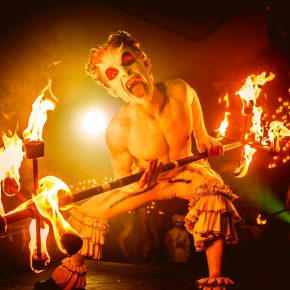 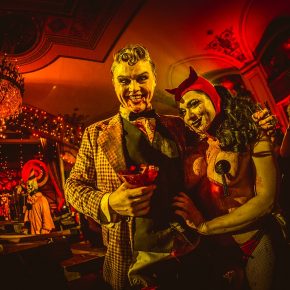 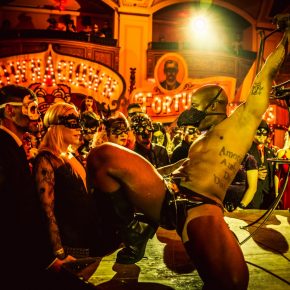 Are you the “photographer in residence” or a guest with privileges?

The short answer to your question is … yes, I do shoot specifically for Theatre Bizarre, but Zombo has many eyes; there are several other people who do photography/video for Theatre Bizarre. The higher-ups are careful though to limit the number of people shooting during the event. They don’t want those who are documenting it to interfere with or take away from the experience of the guests. It’s actually for this same reason that my costume of choice is a shadow. Being dressed and painted completely black helps me to blend in and move throughout the crowds without drawing too much attention.

Though it gets to be physically and mentally exhausting, I recognize that I have one of the best jobs at the event. Not only do I get to wander around and experience the party as a whole, but I get to capture moments that I can take home and share with others. I get to make images that showcase the magic of Theatre Bizarre.

One of the most exciting things for me now is seeing my photos on the flyers that are used to promote the party — the very thing that first drew me in. 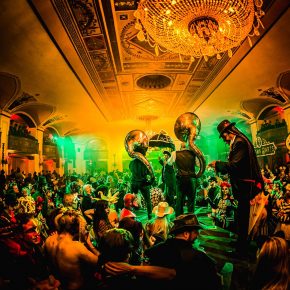 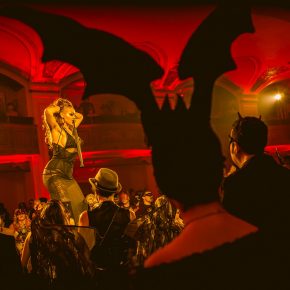 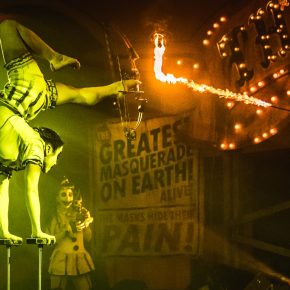 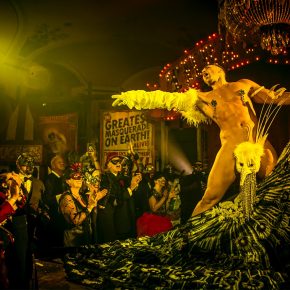 A question suggested by several other photographers who envy your yearly task and admire your work:  What are the principal obstacles/problems arising from an assignment like this? That is to say: lighting, perspective, positioning, etc.

The biggest challenge is just dealing with the scale of the event. It’s massive, constantly changing, and doesn’t slow down until night’s end. Theatre Bizarre is, by design, complete sensory overload. A piece of advice I give to anyone attending for the first time is to follow your gut.

No matter what, you’ll be missing something else, so find the things that are interesting to you. This is my same strategy when photographing the event. Sure, I may have a rough idea of when certain events are scheduled, but it’s not uncommon to get swept away by something else completely. I’ve found it’s best to capture the things that unfold in front of me, rather than planning my night — If you’re always thinking ahead, you’re never truly in the present.

Was there a shot you “missed” that haunts you to this day?

A: Every damn year. And in all honesty, even though I get hundreds of great shots, every year I still walk away feeling like I’ve barely scratched the surface of what I could have captured. But hey, maybe that’s what keeps me coming back. I’ve come to accept that it’s physically impossible for any person to experience all the things that happen at TB, especially now that it takes place on 4 nights over 2 weekends. There’s just way too much happening, all at once, spread across 8 floors of this massive building.

What is Theatre Bizarre to you personally? It’s obviously more than an assignment.

It’s many things. Professionally, it’s been an incredible training grounds for me to hone my craft. It’s sharpened my eye and taught me to trust my intuition. It’s a photographer’ dream!

There have been many times where it actually feels like I’ve pulled a still image out of a dream and brought it back to the real world. It’s pure creativity — creativity for the sake of making something.

I love John’s imagination, the aesthetic he’s designed, and the atmosphere he’s constructed. Every set piece is beautifully made and every detail has been meticulously thought out. He’s a visionary and it’s astonishing to see the this thing evolve every year. It’s a phantasmagorical choose your own adventure escapist paradise.

Everyone who attends the party brings their own creativity. By entering the building, each costumed guest becomes a part of this living, immersive art piece. If only for a night, Theatre Bizarre allows people to leave their day-to-day lives behind and become a part of something larger than themselves.

Above all things, Theatre Bizarre is a family… or maybe a cult.

Yeah, it’s somewhere between a family and a cult. It’s a creative passion project that’s brought to life by the tireless efforts of hundreds of individuals. From the construction crew to the stage performers, every person involved plays an important role in turning this insane dream into a reality. Basically, we’re all just a bunch of fools in service to Zombo, and I’m honored to be a small part of it.