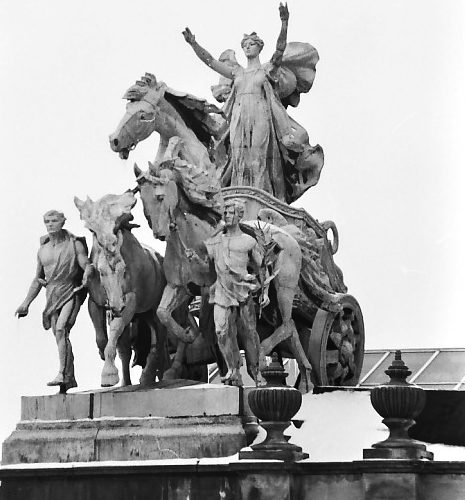 Just think, the iconic statue of Hazen Pingree in Detroit’s Grand Circus Park could have been declared World War II scrap metal to help America’s war efforts. Imagine Pingree being transformed into metal plates for a warship or bullets! To build armored tanks, ships, and weapons required massive amounts of metal. A single armored tank needed 18 tons of metal, and one of the United States Navy’s biggest ships took 900 tons.

Anything using metal, from chicken wire to farm equipment, was rationed, according to LEARN NC and war office sources. Detroiters were called upon to turn in scrap metal for war-time recycling and schools and community groups across America held scrap metal drives. 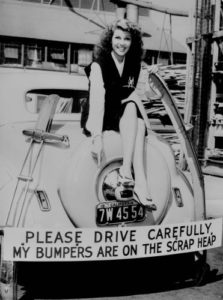 Celebrities helped promote these efforts. Even Rita Hayworth, the pin-up sensation actress, announced she was “harvesting a bumper crop for Uncle Sam.” Detroit, being the car capitol of America, saw its automobile owners dismantling their metal car bumpers and replacing them with wooden ones. Piles of metal car bumpers, like big mounds of buffalo bones, were placed on train cars and shipped to the foundries.

Actors and actresses in the campaign to turn unessential metal car parts also helped America in its efforts to sell war bonds.

According to historical information published in1943, both at the Michigan Historical Commission and the State Historical Society, meetings were held and statements placed on the record as “being strongly opposed to the scrapping of irreplaceable metal relics until such action becomes necessary.”

The organizations expressed their belief that the sum total of metal in these historical relics was too small to affect the course of the war one way or another, while their morale and cultural value is high, symbolizing things we are fighting for as a part of the American way of life.

The Grand Army of the Republic (GAR) who met at their old historic building in Detroit, took a similar attitude declaring that “the small amount of metal gained is not commensurate with the great historical loss.” An article in the October 17, 1943 Flint Journal summed it up: “Until all available shapeless scrap is gathered from garages, barns, farmyards, and vacant lots, it would seem unnecessary to demand the junking of some of the nation’s priceless trophies, cannons, statutes, bells and the like. Some of the finest chapters of our history are written on the iron tablets of monuments.”

Frank Barcus, of the Detroit City Plan Commission, in 1943, mentioned the Detroit phase of the scrap metal campaign. “Detroit,” he says, “has a few fine pieces of monumental heroic bronze sculptures, the Williams equestrian statue on Belle Isle, the Pingree statue in Grand Circus Park, Europa and the Bull at Banbrook, and the two quadriga groups on the County Building. Each of the quadriga groups has three horses, one chariot and three figures, towering above Cadillac Square.

“The war salvage drive has recently inspired the County Auditor to turn over the bronze groups to the scrap pile, but the offer creates a furor in the newspapers,” Barcus continued. Fortunately, the focus on Detroit’s historical monuments as a source for war metal scrap was abandoned, and today we are still able to see and learn from them.