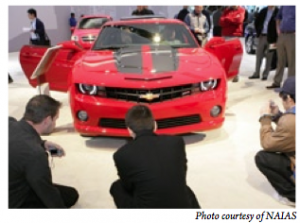 The North American International Auto Show will open its doors in less than two weeks with excitement and anticipation continuing to build forth the auto industry’s flag ship. On Jan 11th global eyes will turn to Detroit as the press days kick off with an anticipated 30 worldwide, and 10 North American product unveilings.

“As we prepare to open the doors to the 2010 NAIAS, we are ready for the thousands of domestic and international media to walk through Cobo Center in search of the latest product information from the heart of the automotive industry,” said Doug Fox, chairman, 2010 NAIAS. ” The addition of Electric Avenue, combined with the returning MEDC EcoXperience, and the nearly 40 debuts to date, means that this show will be unlike any other in its offerings to the media, public and industry.”

The public and media will be treated to a number of world debuts of highly anticipated vehicles from exhibitors such as Ford, Chevrolet, BMW, Audi and Volvo to name a few. The all-new Electric Avenue area presented by The Dow Chemical Company will showcase highly anticipated vehicles such as the Nissan Leaf, Mitsubishi MiEV, Commuter Cars Tango 600 and the SABA “Carbon Zero” Roadster.

Entering its 22nd year as an international event, the NAIAS is among the most prestigious auto shows in the world, providing unparalleled access to the automotive products, people and ideas that matter most – up close and in one place. One of the largest media events in North America, the NAIAS is the only auto show in the United States to earn an annual distinguished sanction of the Organisation Internationale des Constructeurs d’Automobiles, the Paris-based alliance of automotive trade associations and manufacturers from around the world.

Detroit has hosted an auto show for over a century. For the first several decades of its existence, however, the show’s focus was strictly regional. Then, in 1987, a visionary group of auto dealers within the Detroit Auto Dealers Association (DADA) asked a bold question: Why not make the event truly national in scope? For that matter, why not make it the best auto show in the United States? Achieving this objective within only a few years’ time, the North American International Auto Show pursues a vision of continually redefining what it means to be the auto industry’s indispensable North American event. To achieve this goal, the Auto Show continually introduces bold new ways to enhance attendees’ experience and deliver exceptional value to media, industry and the public.

Opening to the public on Monday, January 11, The Gallery will provide luxury vehicle enthusiasts an opportunity to see elite vehicles in a private setting. The public can view these luxury vehicles at the MGM Grand Detroit on Monday, January 11 from 12:00 pm-9:00 pm, and Tuesday, January 12 from 8:00 am-12:00 pm. Tickets are $25 per person and allow one-day entry to The Gallery and one-day entry to the NAIAS during the public show, January 16-24. Tickets can be purchased at www.naias.com.

This is a rare opportunity to see high-end luxury vehicles showcased under one roof, which include Rolls-Royce, Ferrari, Bentley, Lamborghini, Spyker, and

Aston Martin.
“The NAIAS is pleased to offer an opportunity to the

public, for the first time, to view the vehicles on Monday and Tuesday, January 11 and 12,” said NAIAS 2010 Chairman, Doug Fox. “We are truly able to generate positive economic ripple effects on the local economy by adding yet another venue such as the beautiful MGM Grand Detroit to the NAIAS. More details on The Gallery will be out in the coming weeks.”

The North American International Auto Show 2010 is where the global automotive community comes together to catch up on the latest. Join more of your peers from around the world at the industry’s most substantive annual event. In addition to 60 new vehicle premieres – including some of the automotive world’s most eagerly anticipated – you’ll gain unprecedented access to more of the industry’s top leaders and thinkers in one place than anywhere else in the hemisphere. NAIAS-issued media credentials are required to attend.

Connect with automotive professionals representing almost 1,000 companies and share insights with over 14,000 of your peers. Make new connections. Forge new alliances. Give yourself new inspiration to lead and succeed. This unique networking opportunity brings together the latest automotive products and services with the key minds behind them all under one roof.

Enjoy the first views of the spectacular North American International Auto Show 2010. Charity Preview is your opportunity to be a part of one of the most exclusive, high profile events in the nation. Proceeds directly benefit a wide range of children’s charities. Funds raised will support services for children of all ages from birth to 18. Since 1989, the Charity Preview has raised more than $79 million for southeastern Michigan children’s charities – over $35 million of which was raised in the last six years alone.

Experience the next generation of transportation at the North American International Auto Show 2010. See more than 700 vehicles on display, representing the most innovative designs in the world and experience North America’s largest and most prestigious automotive showcase.