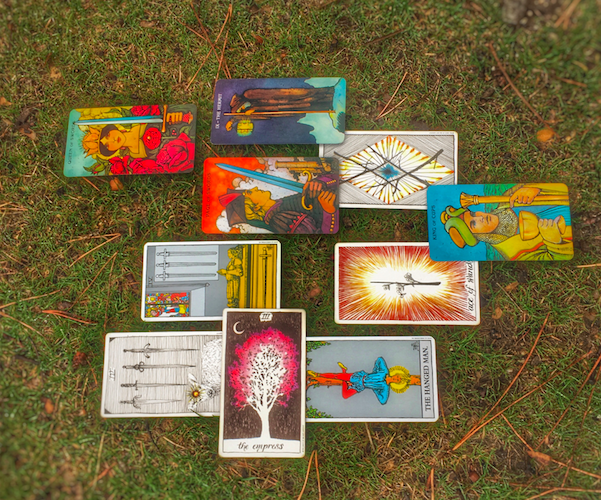 Editor’s Note: As April nears an end we must agree with Ms. Schweizenheimer’s reading, as we did not receive her timely Tarot via email until late April. Mercury In Retrograde? We apologize to all. That said; it is interesting to see if our Intuitive was also on for you …

April showers bring…floods and traffic jams? Not what you were hoping for, is it? Well, the good news is the Spring Equinox has really loosened the soil. Those business, health and personal blockages have opened. If we imagine our lives as a trickling river, the spring melt has added gads of dangerous water that both dissolves small problems and creates new surprising ones. If you are able to pause this month, you’ll notice lots about yourself, your mate and your field of business that you were blindly blindly before.

It feels as if you’ve been given a job to do. And you feel elated and honored with the responsibility. However, due to Mercury Retrograde, nothing is moving. You’re on this project alone and several components are stuck. For example; you’re managing a new band and everyone loves them. They want to release the new stuff on vinyl but you know, the only record press that’s running in this area is broken. The only guy who knows how to fix the machine is retired and on a dream trip to Beijing. It’s hard to get him on the phone because you know…China. And the album needs to be released ASAP because the tour is booked…and you get the picture. Add a few car problems, phone crashes, lost keys and surprise arguments and yeah, that’s Mercury Retrograde.
These cards suggest, while the energy of April is fresh and peppy, you’ll have a number of problems to solve and they’ll come out of nowhere. Be aware. Be dubious of complicated meetups. Avoid convoluted directions and surveys. Under commit. Keep it simple. But yes, you can be optimistic. Look at the Four of Swords and the Hermit card. Both shine a light. Let your inner light guide you. Give yourself space to hear your intuition. I think despite Mercury Retrograde and all the disruption that may cause, you’ll be pleased with where you are at the end of this month. Good luck, Magic Makers.
Modern intuitive Erika Schweizenheimer uses tarot readings to bring clarity to relationships, career and politics. She writes tarotscopes that offer direction in a mad, mad world.