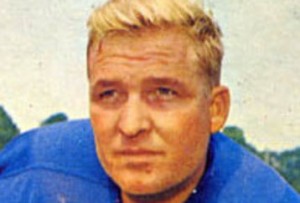 A Brief History of the Detroit Football Lions

Or, The Curse of Bobby Layne

Detroit welcomed the Lions in 1934, but it was not the area’s first look at professional football. In 1920, the Detroit Heralds were a charter member of the American Professional Football Association, which was the original name of the present NFL, but the club folded after two years.

The Detroit Panthers appeared in 1925, but also folded after two seasons. In 1928, the Detroit Wolverines were formed, but they failed after just one year. The then-10-year-old National Football League added a franchise, in 1930, from Portsmouth, Ohio, called the Spartans. After four seasons, the team was purchased for $7,952.08 by a group headed by Detroit radio executive George A. Richards and moved to the Motor City.

Playing in the university of Detroit Stadium before crowds that averaged 16,000, the new Detroit Lions won the NFL Championship in only their second year (1935). Under the leadership of Coach “Potsy” Clark, and stars like Hall of Famer “Dutch” Clark, Ernie Caddel, George Christensen, “Ace” Gutowsky, and big “Ox” Emerson, the early Lions established pro football in Detroit.

In 1940, Chicagoan Fred Mandel bought the club but the team was sold eight years later to a group of local businessmen under the leadership of Edwin J. Anderson. The Detroit syndicate controlled the club until 1964, when William Clay Ford became the sole owner for a price of $4.5 million. 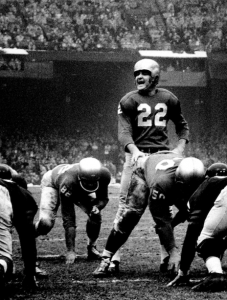 The Lions dominated the NFL in the 1950s with four division titles and three league championships. Under the direction of head coach Buddy Parker, the team won back-to-back world crowns in 1952-53, defeating Cleveland on both occasions. Stars of those powerful teams were Hall of Famers Bobby Layne, Jack Christiansen, Doak Walker and Lou Creekmur.

The Detroit-Cleveland battles of the era were classic confrontations between two giants of the blossoming NFL. But, since their last title in 1957, under the coaching of George Wilson, the Lions have continued to search for the league’s top spot.

In 1958, after leading the Lion’s to 3 NFL Championships, the organization traded Bobby Layne, who was injured during the last Championship season. As Layne was leaving for Pittsburgh he was quoted as saying, “Detroit would not win (another Championship) for 50 years.” Thus, the ‘Curse of the Lions’ began.

Schmidt started the first of six seasons as head coach of the Lions in 1967. His 1970 team made the playoffs, (first postseason trip since ’57) but lost in the first round to Dallas by the baseball- like score of 5-0. “Could this be the ‘Curse’?” fans wondered.

The Lions moved into a new, domed stadium in Pontiac, Mich., a suburb located 30 miles north of Detroit in 1975. The ‘Silverdome’ was at one time the world’s largest air- supported domed structure and seated over 80,000 spectators.

Monte ‘the Clown’ Clark took control as head coach in 1978 and the Lions narrowly missed playoff berths in 1980-81, before qualifying in 1982 — the Lions’ first playoff appearance since 1970. Meanwhile, the Pittsburgh Steelers, the team Bobby Layne went to in ‘58, won four Superbowl Championships in five years throughout the 70’s.

Detroit captured the NFC Central Division crown in 1983, but stumbled in the first round of the playoffs with a 24-23 loss at San Francisco. Despite Monte Clark praying for a miracle on the sidelines, the extremely reliable Eddie Murray missed the field goal and the ‘Curse’ continued.

Darryl Rogers took over for Clark in 1985 but was replaced on an interim basis by his defensive coordinator Wayne Fontes in November 1988 after Rogers’ teams had posted a combined 18-40 record.

The Lions “Restored the Roar” in 1991, winning a franchise record 12 regular season games. Riding a tide of emotion after guard Mike Utley’s paralyzing neck injury, Detroit defeated Dallas, 38-6, in the Lions’ first Silverdome playoff. The victory gave the Lions a berth in the NFC Championship Game, but once again the Curse came back to haunt Detroit, who fell to the eventual Super Bowl Champion Washington Redskins.

Detroit finished 10-6 in 1993 en route to capturing the NFC Central Division title, and earned a Wild Card playoff bid in 1994. The 1995 Lions featured the NFL’s top-rated offense and won their final seven games to earn a third straight playoff berth.

Running back, Barry Sanders, captured his third NFL rushing title in 1996, with a dramatic 175-yard outburst on the final Monday night of the season in San Francisco. The Lions, however, finished a disappointing 5-11, and following the season, the tentative Fontes was replaced as head coach by former San Diego Chargers’ head coach, Bobby Ross.

That season, Sanders, who was inducted into the Hall of Fame in August 2004, continued his storybook career by becoming only the third player in league history to record 2,000 yards rushing in a single-season (2,053) and he reeled off an NFL record 14 consecutive 100-yard outings.

It is rumoured that Sanders – perhaps the finest back in NFL history – who abruptly retired from football in 1999 with only 1,458 yards needed to surpass Walter Payton’s top spot on the all time rushing list, was suffering from bouts associated with the ‘Curse’, summoned by Bobby Layne.

The Lions closed out the 90s reaching the playoffs for the sixth time in the 10-year span, which is a franchise record for playoff appearances during a decade but, once again, the ‘Curse of Lions’ prevented them from appearing in the Championship.

After playing nine games into the 2000 season, compiling a 5-4 record, Ross abruptly resigned as head coach and was immediately replaced by Gary Moeller. Moeller guided the team to a 4-3 record over the last seven games, but narrowly missed the playoffs with a loss to the Chicago Bears in the season finale.

Following the season, William Clay Ford named Matt Millen – a Curse unto himself – president and CEO, and he assumed control over team operations. In 2001, Gary Moeller was replaced as head coach by former San Francisco 49ers offensive coordinator Marty Mornhinweg, and the Millen/Mornhingweg combination pretty much sent everything to hell in a hand-basket.

A new era in Lions’ history dawned as Ford Field, the team’s $500 million downtown Detroit stadium, opened its doors in August 2002. The 65,000- seat stadium sparkled as its retro and innovative features glistened in the national spotlight.

In celebration of the new stadium, the Lion’s lost the inaugural regular season game against the Green Bay Packers, bringing the ‘Curse’ fully into the new era.

But, on November 28, 2005, Mariucci was relieved of his duties, leaving our fair city with a blank, zombie-like gaze in his eyes, that seemingly robbed him of all memory of his days in football. Dick Jauron was named interim head coach for the remaining five games but luckily escaped Detroit before it was too late.

In 2006, the Lions hired Rod Marinelli as the team’s 24th head coach, a position “Pumpkinhead”, as he was called in certain quarters, would hold through 2008.

The Lions commemorated the franchise’s 75th year, in 2008, by completing the first ever 0-16 winless season in NFL history. On that day, it is said Fans of the Lion’s could hear the hideous sounds of grotesque laughter from Bobby Layne, somewhere off in the great beyond.

The ‘sliver-lining’ – forgive the pun – to that fateful season is that the ‘Curse’ has finally come to an end. Detroit is embarking on a new era. For the first time in team history, Detroit entered the season with a new president, Tom Lewand, a new general manager, Martin Mayhew, and a new head coach, Jim Schwartz.

Together, they are the driving force for the team’s success on and off the field, and with the ‘Curse of the Lions’ now a thing of the past, fans of Detroit can finally look forward to a trip down Superbowl lane sometime in the next half-century.