A NIGHT AT THE OPERA WITH KELLY KADUCE

With a grueling 2009-2010 schedule, Ms. Kaduce prepares for her role as Donna Elvira, in Wolfgang Amadeus Mozart’s tour de force Don Giovanni (April 10,14,17 – detroit opera house), concerning herself first with pitch before fine tuning her style. “I always work on improving” Kaduce says, “ especially with opera, where the acting needs to be integrated vocally.”

This becomes increasingly more impressive when one considers the range of roles performers like Ms. Kaduce field in a typical season. This season alone, the songbird with the “velvet vocals” has returned to her signature role of Mimi in La Boheme, had her debut as Nedda in I Pagliacci, performed the title role in Suor Angelica and will open the Santa Fe Opera’s 54th season in a new production of Madam Butterfly.

“It’s great when someone wants to hire you but half way through I get so tired and think that maybe I should have stayed at home rather than work.” Kaduce offers with a laugh. “ But then I remember how much I love what I do and how I enjoy traveling with this community of actors.”

The troupe is always trying something new, seldom repeating a production exactly, which, according to Kaduce, “usually winds up better with age.” In Don Giovanni, for example, it has been decided to play Donna Elvira as a counterpart to Don Juan, equal emotionally and physically. The two are in love but Don Juan can’t settle down. Ultimately, the relationship is unsuccessful.

Performing in an opera composed by Wolfgang Amadeus Mozart must have seemed far away to Ms. Kaduce who grew up in a small town in Minnesota. Her first solo came on Christmas Eve at the age of four where she remembers wondering if it was “normal” to do so. Having a love of singing, Kaduce performed in Annie when she was twelve, took piano lessons, “loved music”, tried out for All State Choir, “got in” and continued to pursue her musical studies.

“I came in college as a biology major,” Kaduce remembers. At Boston U. she grabbed a brochure for light opera, began meeting singers from Manhattan College, Julliard, as well as Boston, and from that point one thing led to another until, Voila!

“I like Brandi Carlyse!” Kaduce quickly points out. “Me too,” I respond. “What’s that song called . . .” “The Story,” we say simultaneously. “Her voice in that is just amazing,” This, from a woman whose attributed with delivering “high notes that thrill” and possessing a “creamy middle range.”

Kelly also likes movies, particularly those from Martin Scorsese and, she shyly admits, to loving The Lord of the Rings Trilogy. But, it’s live opera that Ms. Kaduce responds to most. “ When the orchestra comes soaring in and that first singer opens her mouth, it’s a visceral experience.”

“What’s it like when you’re on stage?” I ask. “Is it also visceral?” Pause. Breath. “It’s an intimate experience. Even if the house is full. It’s freeing in some way. You get to take a break from your own life and lose yourself in the life of someone else.”

“Are you happy with your career at the moment?” I inquire. “Yes and no, with the premise that the grass is always greener.” Reveals Ms. Kaduce. “I would love to sing at The Met and La Scala but I also realize how lucky I am to have work and a career. You have to separate ego and reality because, in truth, it doesn’t matter where you perform.”

The cast and crew will be rehearsing six hours a day, six days a week, from now until opening night. Some days are reserved for music with the conductor, some for staging, while others are set aside for costume fitting. The rest of Kelly’s time will be spent walking Lulu, her Bichon Frisee. 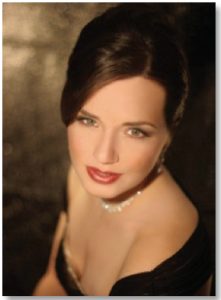