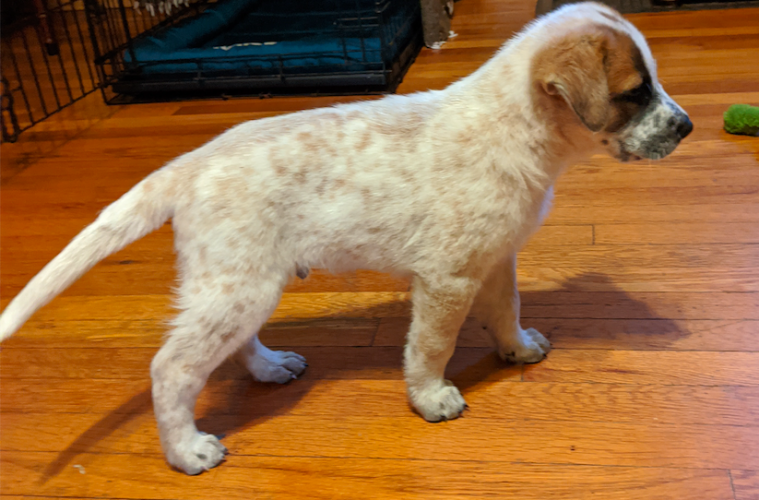 What is there to do when my wife and I are stuck at home during a pandemic? Why, adopt a puppy, of course. And that’s what we did. We named him “Mingus.” He is a Blue Heeler – Lab mix. At least, that’s what we were told by the woman we got him from, whom we met under the lights in the darkened parking lot of the Staples in Adrian. He’s got a Heeler face, which Heeler lovers immediately notice, but now that he’s getting bigger he’s gotten pretty lanky; long legs, long body, floppy ears; surely due to the Lab genes.

Blue Heelers, aka Australian Cattle Dogs, are highly intelligent, very energetic, and cute. Mingus, while well past his peak cuteness, is constantly subject to strangers stopping on the street to ooh and aah at him like they would a baby. Everybody loves Mingus. They want to pet him, and that’s fine with Mingus. He likes to meet people and dogs. He wants to play with dogs. He wants to chew on people.

For Mingus, everything falls into one of two categories; food or chew toy. Food includes the stuff we feed him, his consumable rawhides and bones, and things found on the ground like, well, I’d love to tell you, but I don’t know. Not all of what ends up in his mouth is identifiable. Most other things, including my house, my wife, and me, (and you) are chew toys. That may change come the Apocalypse, so be warned.

Judging from the difficulty my wife had in finding a puppy to adopt, we were not the only pandemic-inspired people looking. She spent many hours, over many days and weeks, looking through doggy adoption websites, calling shelters, filling out applications, and talking to people before finally finding the colorful little fur ball that she fell in love with and that we were able to adopt. Most of the applications she filled out were not even responded to. And with others, we were rejected outright. For a brief moment (until she saw how many thousands of dollars they cost) she talked about buying a Rottweiler puppy. Thousands of dollars are some of the things we don’t have.

We would have had an easier time adopting an adult dog, but there are too many unknowns with an adult, and we needed to have as close as we could get to a guarantee that the dog we adopted would be good with people, especially children. It wouldn’t do for one of my young students to go home bitten and bleeding.

When you read the descriptions of the adult dogs looking for permanent homes on the various adoption sites, they all sound wonderfully positive. The dogs are “sweet and loving,” “full of energy,” a “love bug,” or have an “exuberant personality” and “loves to play.” There are subtle clues though; “prefers a home without other dogs,” “needs experienced owner,” “no kids under age of 10,” that let you know about possible challenges. It’s a good idea to pay attention to those clues. It also makes me wonder about how many of these challenges are due to the dog’s personality and how many are due to stupid or malicious humans.

Mingus loves children – as chew toys (see above), but if they don’t pull their hand away while he’s chewing on it, they will get scratched by those sharp, cat-like, puppy teeth. That goes for adults too. But seriously, he just wants to play.

Walking the streets of Ferndale, as we do, we meet other people walking their dogs. It’s unavoidable as everyone in Ferndale (or so it seems) has a dog. The neighbors on either side of us and across the street all have dogs. The neighbor behind us used to have one. Two doors down there are three dogs. Sometimes we stop and chat with other dog walkers. Even other dog owners love Mingus, and they want to know all about him. Sometimes Mingus will play with their dog while we talk. He’s made friends with Scout, and Louie, and other dogs whose names I’ve forgotten. Other times, especially with older dogs, the dog will check Mingus’ exuberance with a growl, or if necessary, because Mingus doesn’t always take the hint, with a snap and a growl. That never stops him from trying though. The dogs, even if they don’t play, have to sniff each other. It’s what dogs do. Leashes get tangled. Before things get too messy, we must all be on our way. One of Mingus’ favorite stops is Geary Park to watch the skateboarders. He also gets attention there. Kids, like adults, want to meet him.

On the negative side, and in the interest of honesty, so his misdeeds are not exposed sometime in the future when he’s up for a prestigious award or a seat on the Supreme Court, Mingus can be a bad influence. Sometimes he is that kid your mother told you not to play with. Our next-door neighbors recently adopted a Bernese Mountain Dog puppy. Sometimes the neighbors bring the puppy out to “do her business” when Mingus is out. He does his best to distract her. He wants to play and make her forget all about the important reason she is outside. Of course, the two dogs are adorable playing with each other through the fence.

There are also chickens across the fence, and Mingus has become fascinated with them. I’m not sure the chickens share the fascination, but I’ve seen them come up to the fence to commune with him. Maybe they’re as curious about him as he is about them. I’ve learned that chickens are smarter than we give them credit for, so curiosity is a possibility. Sometimes Mingus barks. Sometimes the chickens scatter; sometimes they don’t.

Prior to Mingus, I’d never heard of Blue Heelers. Now they seem to be all over the place. Our puppy class teacher loved Heelers and adopted one herself. Naturally Mingus, who was the loud, obnoxious kid of the class, became the teacher’s pet. Walking past a house in Pleasant Ridge, a woman who was putting up her Christmas lights ran out to meet Mingus because she and her husband have a two-year-old Heeler. She gave me some tips on raising a Heeler.

Another Heeler owner we met along the way told me of a device I can attach to my bike so that Mingus can safely run along side. Mingus needs to run. Heelers demand a lot of attention and exercise. They will get into trouble if they’re left on their own for too long, which is anything over 8 seconds. Mingus will chase balls and toys when I throw them in the backyard. Sometimes he will chew on them, and sometimes he will play Keep Away with me, which isn’t really fair. I’ve only got two legs.

When I was growing up, there was usually a mutt in the house. They were mostly strays that some family member had brought home. There was Nick, then Lady, Lucky, and finally, Sanford. None of them were trained. We never took them on walks. We played with them in the yard, because that’s what we did on my block in those days. There was one adult neighbor who did walk his Cockapoo. He never went anywhere without that dog, and he used the dog for tormenting young children who hadn’t yet learned to fear strange dogs.

My kids grew up with two dogs, Abby and Nico. Nico was first, then Abby because (I thought we were joking) Nico needed a pet. On the plus side, the dogs always had a doggy pal paying attention to them. Our children were also around to keep them busy. The dogs slept in the kids’ rooms at night, Abby with my son, Nico with my daughter. Nico snored though, and there were complaints that she hogged the bed. We took the dogs to training classes, but we were not as diligent about following up with home training as we should have been. The dogs were best friends for the most part, except when Nico’s jealousy kicked in and they got into bloody, high-vet-bill fights. After the second fight, I put my foot down and insisted we would have to get rid of one or both dogs. I immediately picked my foot back up when the tears began flowing from my wife and daughter. I apologized for my inhuman suggestion, and even offered to adopt another dog. I was eventually forgiven for that errant thought, and both dogs lived long, pampered lives.

But now we have Mingus. And Mingus is a swell dog. He’ll be even better once he learns a bit of impulse control and stops eating my house. Oh, and earlier I wrote about how smart Heelers are, but Mingus is almost five months old and he still struggles with algebra. His written sentences are not so great, and forget spelling. But if you meet us wandering the streets of Ferndale, Pleasant Ridge, or Oak Park, say “Hi.” In case you’re wondering, Mingus is the furry, four-legged one. I am the servant, usually walking a respectful distance behind him, or cleaning up after him, or waiting impatiently while he sits and watches people pass by, or feeding him treats in order to get him to walk the way I want him to walk.

If you do stop us, Mingus will bark and then come over to be doted upon. Dote away!