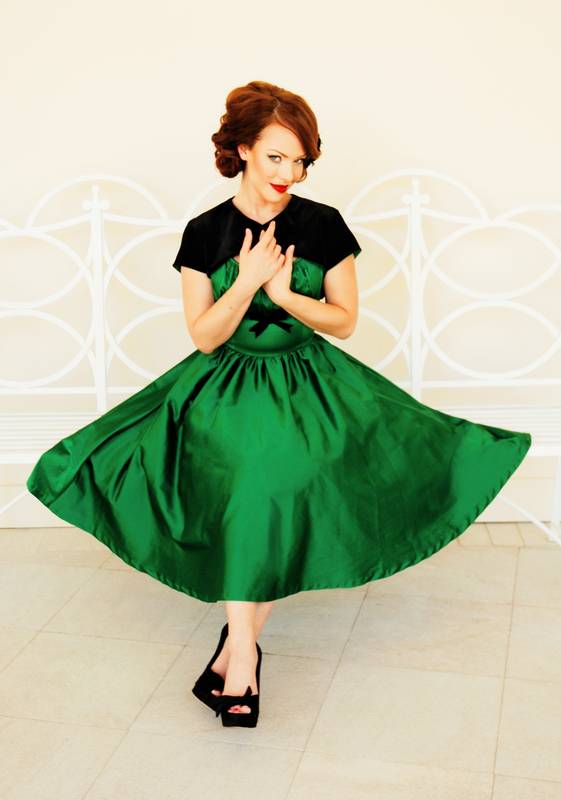 Detroit has won the hearts of many who are not originally from the city, including celebrities. One such celebrity is warming Detroit hearts and hands through her lovely smile, talent and charitable organization Mittens for Detroit. Actress Erin Cummings, famous for movies such as The Iceman and TV series Spartacus, Mad Men, Pan Am and Detroit 187, sat with The Metropolitan to chat about her life, career, and love for Detroit.

Jeanette Frost: I realize your career keeps you on the move, but where are you from originally?

Erin Cummings: I was born in Lafayette LA. Then my family moved to Omaha NE, Seoul Korea, Bossier City LA, then my dad retired in Huntsville TX. Jr high and high school I lived in Huntsville. Interestingly enough, I don’t feel the same connection with Huntsville as I do with Detroit. Even though I have only been in Detroit for the past 4 years and not even living here full time anymore, I have a stronger connection here. I think having a military family background makes it easier to call a different place home. The idea of a hometown is not something I understand too much because of having to move around.

JF: How did you get started in acting?

EC: I always loved acting in school plays as a kid. I felt comfortable on stage; it was my happy place. There was something about pretending that I liked. I started getting typecast as a villain at a very young age. In one play, I was a chicken whose eggs got stolen from the Easter Bunny. My motive for the entire show was to track down the Easter Bunny and get my eggs back. Which I think, ‘Rightly so!’ Because who steals someone’s eggs for people to decorate? It’s kind of barbaric when you think about it.

I didn’t really get into acting until I was in college. When I was in high school, I did very well in the dance drill team world, which is very prevalent in the south. I went on to become a member of the Kilgore College Rangerettes, which was the very first college dance team in the world. That instilled a strong work ethic in me as well as having a military father. Becoming a Rangerette was a defining moment in my life. It taught me that in order to be really good at something, you MUST put the work in. You can’t just go to performances without rehearsing.

When I was in college, I was an advertising major and I realized that the only thing I loved about advertising was the art of the pitch, preforming for the client. On a whim, I ended up on a trip to Los Angeles for a week. While I was there, it really blew the lid off all these misconceptions I had about what actors living in Los Angeles are like. I met waitresses, bartenders and store attendants who were all actors outside of their day (or evening) job. I immediately started taking acting classes. Some actors had degrees from acting schools, but that didn’t guarantee them anything. I found these degreed actors didn’t necessarily have an edge over me because they were still waiting tables right along side of me.

I did not fall under the trap of only giving myself 2 years to find success in acting. I feel that’s dangerous for anyone who wants to pursue an artistic venture. When you’re an artist, so much of your success really depends on other people seeing what you have to offer. It’s a strange combination of being true to your art while also promoting yourself. I was given a good piece of advice from a friend, when I moved to Los Angeles. “It’s not about who you know. It’s about who knows you; that is what’s really important”. To attract opportunity, it’s not about simply meeting people. You have to show them what you’re worth and let your work speak for itself. I trained as much as possible so I would always be prepared for opportunity. I wasn’t afraid to do the small stuff. I acted in every student film that didn’t ask me to take my clothes off. I did plays for no money in small black box theaters. I did everything to gain experience. That built my resume and set me apart from being just another pretty face in Hollywood.

For all event and charity info please visit mittensfordetroit.org

JF: Who do you admire in your field?

EC: Julianne Moore, Sela Ward and Sandra Bullock – Women who have taken a long road to shape their careers. Some actors say “Oh, I’d never do soap operas”. Here are my thoughts: Julianne Moore and Eva Longoria both started in soaps and they haven’t done too bad now have they? I feel it’s important to look at people you admire and investigate their story. Was it easy for them? Probably not. So maybe the easy way isn’t what’s right for me.

JF: Tell us a little bit about your relationship with Detroit.

EC: I lived here for 7 months while acting in Detroit 187. I continued Mittens for Detroit into the following season and it has never stopped. That has kept me traveling back to Detroit pretty regularly for promoting the organization and delivering gloves. Currently I live in LA, but have an apartment in New York where I live most of the year. You go where the job takes you. My schedule in Detroit is significantly more involved than any other time. When I go back home to New York or LA people ask” Don’t you want to go out?” I typically don’t because I prefer sitting on my couch with my cats and knitting. That’s what I like to do.

The thing about Detroit I love so much is that we were immediately embraced when we arrived for 187. Initially people were concerned with how the show might portray Detroit. But once people saw that we were capturing the spirit of Detroit and the love people have for their city, they got excited and supported us. We, as a cast, appreciated that. People invited us to Pistons, Tigers, Lions and Red Wings games. We proudly sported our Made in Detroit clothing whenever we could.

When I moved to Detroit I had the opportunity to do a lot of promoting, not just for 187 but for charities as well. Once I started Mittens For Detroit, things really took off with my love for the city because I saw enthusiasm of people wanting to pitch in. They dropped mittens and gloves in our donation bins all over the city, out of the goodness of their hearts. Detroiters have such passion for their city. They show their care by giving back to the community and that’s not something I have seen in my many travels. I have been fortunate to work with really wonderful people and organizations locally; Florine Mark from Weight Watchers for example, Rod Alberts & Scott LaRiche from the Auto Show, Grace Keros from American Coney Island, The Detroit Tigers Foundation and Ilitch charities. Mittens For Detroit is important but I care about Detroit period.

When I’m in NY or LA and I say I’m headed to Detroit, often people will say stuff like “I’m sorry” with a smirk on their face. I then educate people “I’m not being forced to go. I actually love spending time in Detroit”. TV only focuses on the negative side of Detroit because that’s what they believe sells. Look, it’s way more exciting for Anthony Bourdain to go into a rundown neighborhood and show the blight of Detroit. Heaven forbid he goes down the street and feature a company like Shinola, who is one of many fabulous companies bringing manufacturing back to Detroit. Bourdain told the same story that everyone else has done. I’d love to see a show step outside of the box, feature some interesting businesses and focus on what else is going on in Detroit, because the city certainly has a lot to offer.

JF: Tell us how Mittens for Detroit began.

EC: I was handing out candy one Halloween night at my friend’s house in the city. Two little girls came to the door; one of them was shivering and crying because she was missing a mitten. My friend invited the girls and their mother inside to get warm. My friend got a spare pair of gloves out of her car, put them on the girl’s hands and gave her a big hug and some candy. I saw in an instant how that simple act of kindness changed the course of the evening for that family. The girl who was so upset and cold, and her mother who felt helpless, all of the sudden were smiling and enjoying themselves. It had such a profound impact on me that the very next day I woke up and said, “I want to get gloves and hats to people in need”. I started Mittens for Detroit and 4 months later we collected and gave away about 10,000 pair and it just continued to grow from there.

JF: How can people help Mittens For Detroit throughout the year?

EC: We love when people donate during the off season because it gives us the head start we need for the coming winter. That way we can get the gloves/mittens to people before the freezing weather hits. There are many ways to donate, go to mittensfordetroit.org. We buy mittens, gloves and hats wholesale through Broner Hat & Glove (Auburn Hills, MI). For every $10 donation we are able to buy 3 pairs of really nice gloves. Also, if you are a knitter, like me, we will happily accept your glove/mitten donations! Now through Jan 31 2015 people can donate gloves, mittens and hats (handmade or store bought) in collection bins located in area businesses, including many Starbucks locations.

Plus there are a couple of great benefit events coming up that will raise money for Mittens For Detroit:

JF: Thanks Erin. Any movies coming up?

EC: I just wrapped a film called “The Last Word” that should be coming out in 2015.

JF: Finally, if you don’t mind: You are such a lovely woman. Do you have any beauty secrets you can share with us?

EC: The two most important things you can do for your skin are drink water and get 8 hours of sleep. Don’t buy into this nonsense of sleeping 4-5 hours a night. Your body does all of it’s work when you sleep – immune system repairs, weight loss, skin rejuvenation. If you don’t have 8 hours for sleep, cut something else out of your life, but you MUST get sleep!

To keep up with Erin’s whereabouts visit erincummings.com