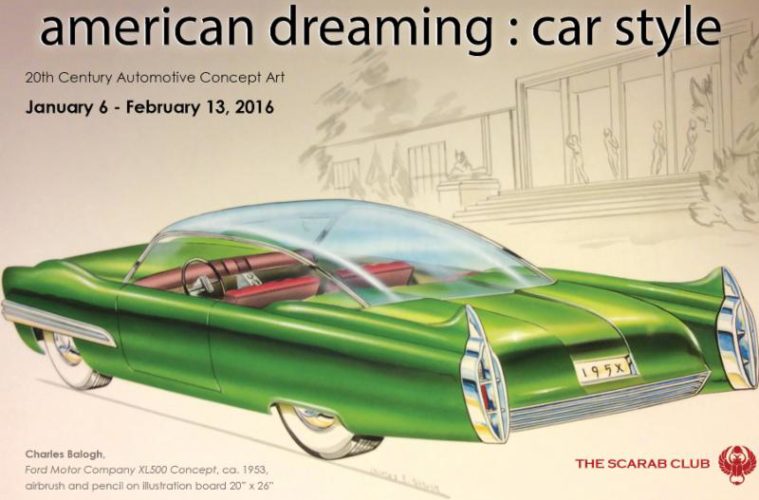 American Dreaming: Car Style Detroit presents more than 50 works of art created in Detroit’s automotive studios from the middle decades of the 20th century, a period considered the “Golden Age” of automotive design.  In the post-World War II era, Detroit-based automakers hired university-trained artists to produce the most visually appealing cars in an effort to gain market share. This was a time when styling and design were highly valued by carmakers, and artists shaped an industry and changed the look of our country.

Automotive company policies mandated that preliminary artwork be destroyed when the final designs were selected for production, so the vast majority of this artwork has disappeared.  Consequently, this exhibit features rare drawings that survived that era.

Until recently, the design work of these artists has been viewed in the context of automotive history, not “high” art. Fortunately, a re-evaluation of this artwork is taking place with increased recognition by mid-century design enthusiasts, car collectors, and art historians.

In connection with this exhibit, a feature-length documentary film, “American Dreaming” is being produced by native Detroiters and exhibit curators Edwards and Salustro. Their film tells the story of Detroit’s leadership in the energy, optimism, and economic growth that fueled the world during the mid 20th century – and the role artists played in creating that excitement through automotive design. AmericanDreamingfilm.com