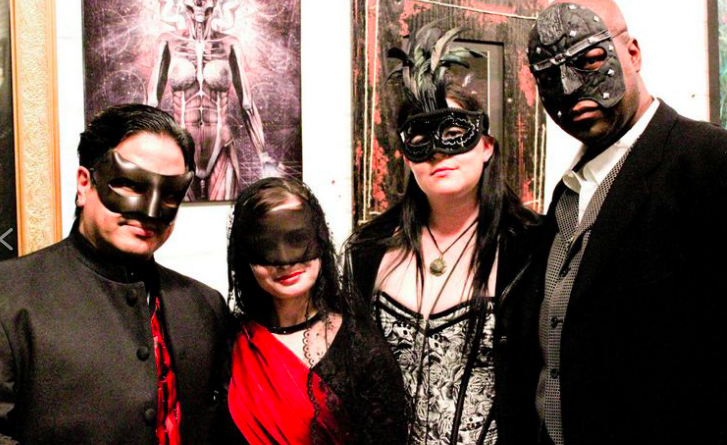 Anthony DVS | An Enlightened Perspective on the Damned

And THAT, ladies and gentlemen, was the succinct and utterly appropriate question uttered by a certain woman from Chicago after she accepted our personal invitation to see the DAMNED show of 2011. She was intrigued, she was mystified, she was moved, she was … well, eager to understand more.

And that is where certain problems always arise.

On October 25 thru 27, the Tangent Gallery/Hastings Ballroom will once again be the showcase for one of the city’s most unique cultural efforts – DAMNED: An Exhibition of Enlightened Darkness.

If you’re going for the first or the eleventh straight time, good for you! If this turns out to be your first foray into these illuminated shades, permit us to give you a modest (and woefully inadequate) pr?cis of what you’ll be seeing. DAMNED is (in many respects) the red-headed step-child of Detroit art events. The problems we mentioned earlier are not problems of description; they are  problems of definition. So bear with us while we (once again) do our best.

DAMNED is not another Detroit Halloween show. It is not a childish exercise in what passes these days for adult morbidity. Nor is it one of those boring pseudo-intellectual episodes where the “intelligentsia” play at bobbing for apples.

DAMNED is today what it set out to be more than a decade ago. A focused and determined and poetic meditation on the human condition. DAMNED starts off with the very simple truth that we share the same fallen and exalted identity in this sphere of existence. We are mortal. We are sentient animals. We are frightened and brave. We exalt ourselves like a loud and braying choir of angels. We fall into the dust like fallen seraphs. We are damned – and THAT is our collective passport through this transit betwixt breathing and death.

Bear in mind also that on Saturday October 27th, DAMNED will transform the exhibition into a sensuous celebration of extravagant delicacies, libations and dance with a formal, mask-mandatory Masquerade Ball.

Anthony DVS, a conceptual art photographer and one of the principal curators of the show, answered a few questions:

For ten years we’ve stepped into the breach and attempted to give the Detroit public a clear and cogent definition of what is meant by the beguiling term “enlightened darkness.” Well, guess what? It’s YOUR turn now. Sir, what do you mean – what are you striving for – what are you aiming at – with this extraordinary celebration of life, death, dream, and nightmare?

One of my most favored quotes is from the Buddhist monk and poet Thich Nhat Hanh who wrote, “The Buddha called suffering a holy truth because our suffering has the capacity of showing us the path to liberation.”

Our term “Enlightened Darkness” refers to that journey of discovery or rediscovering our greatest light within our darkest of moments.  As artists, it is often these diversely shadowed moments where our conscious wanders and explores to see where our creations take us. This art may be the one true reflection of self to express that beauty does lie within the repulsive, balance within imbalance or salvation within personal damnations.

To continue Thich Nhat Hanh’s quote: “Embrace your suffering and let it reveal to you the way to peace.”

Perhaps a non sequitur, but on one occasion you were asked about other artists and how they responded to the same thematic questions that this particular exhibit addresses.  Which historic artists have inspired you most?

One who comes immediately to mind is Spanish painter Francisco Goya. Considered to be the “father of modern art”. I was introduced to his dramatic and sometimes horrifying works, inspired by war and his own dementia, at an early impressionable age through books my father brought from his homeland of Spain. Paintings such as “Courtyard With Lunatics”, “Colossus” and “Saturn Devouring His Sons” still resonate greatly the fear, anguish and pain he lived. The other, of no lesser personal admiration, is French sculptor Camille Claudel. Through the suffering and torment of her notorious relationship with Auguste Rodin, to whom she became muse, model, confidante and lover, she created the most wondrous of works such as “The Mature Age” and “Shakuntala”, before succumbing to and being committed for mental Illness.

Is there a “collective vision” or purpose shared by all the artists and performers?

In a basic sense, yes, there is a collective vision shared by all at DAMNED. Along with the introspective artwork residing on the walls, we also collaborate with the region’s most creative talent to bring unique and original performances amidst the audience, all following distinct themes for each of the three nights…Darkness, Enlightenment and Masquerade.

For the Thursday premier night, entitled The Darkness, all performances can be described as more introspective explorations within the shadowed and primal essence of self.  The second night, Friday, entitled The Enlightenment, is more extrospective and self-enlightened through light, fire and the ethereal. The final night, Saturday, is the formal masquerade ball, appropriately entitled The Masquerade, which becomes more festive as a celebration with a menagerie of exotic cirque, aerial and dance. Collectively, the performers create their own personas and stories for each themed night, sometimes personal in it’s underlying story, but often a reflection of what they are free to convey for themselves.