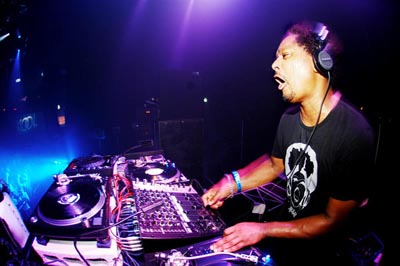 Around the World With Derrick May

Fresh off tour in southeast Asia where he performed during a ‘soft’ party at Singapore’s Marina Sands Bay Hotel for the launch of F1 Movement in Jakarta – a Formula 1 / Movement collaboration in the capital region of Indonesia – techno originator Derrick May sits at table in a hip wine bar in Royal Oak Michigan sipping Italian red, apologizing for being 15 minutes late.

Something about his agent booking the wrong flight, which left May held over in Munich for six days during Oktoberfest while he was en route to Movement Torino Music Festival, where the dj will perform alongside 2manydjs, Sven Vath and The Chemical Brothers.

“If it was Berlin,” May explains, “everything would be cool. I just can’t be around Oktoberfest for a week.” I’ve known Derrick since the late 80’s and can’t escape the image of him in traditional lederhosen at the world’s largest beer drinking event.

“It’s not just the flight,” May continues, “it’s the fact that now I won’t be able to pick up my daughter from school before I leave.” Since returning from Singapore, May has had only two days to spend with his family; girlfriend Sachiko, who is mother to the love of his life, a six year old little girl who, May assures, will be asking daddy with very big eyes, “What time are you picking me up?”

Sachiko sits across our table, seemingly fine with the fact I have stolen an hour of her time, and orders a pint of ale. “We’re going to a movie later so we only have 45 minutes,” May informs me. “What are you going to see,” I ask. “Wall Street. I’ve been waiting to see Gecko’s return for 20 years.”

“Tell me about Torino,” I say. “Unbelievable,” May says, feeling comfortable now in his dark,  jet set wear. “The support system in Torino is amazing, from the creative arts side, to the government, everyone.”

Derrick May has been involved with Detroit’s Electronic Music Festival in most, if not all, of its incarnations. The last few go-arounds May – like many contributors to Movement – ran into his fair share of problems, from Mayor Kwame, to the city council, to finance, the list goes on.

“Torino is just an energetic city, it’s electric, and the excitement for Movement has been growing,” May says. “The food, the hospitality, everything is amazing, and you can still get good quality food and wine very cheap in Italy. Good food is everywhere, none of this Top Chef foo foo stuff; pasta, pizzas and very fresh fish.”

Derrick calls the waiter over and orders a round of appetizers for all to share; Seared tuna, breaded shrimp, calamari and a chicken dish of some kind. Intelligent, confident, a man who has seen the world, May remains gracious, genuinely concerned with the well being of others, the antithesis of what the media says about Detroiters.

Lately, May djs six to seven hour sets, “amazing journeys”, as he calls them, which feed off the reactions of ‘the people’. He regularly travels with the same records preferring to “switch-out” once a month, but assures that he never plays them the same way.

“Do you recognize yourself as an originator of Techno,” I ask. May leans in, looks me in the eye and with a soft smile says, “We’ve been trying to re-brand our music for years. I call it Hi-Tech-Soul. Techno has become boys with tattoos, with their shirts off, in your face (May’s fist in the air to an imagined 4/4 beat). It’s very aggressive, anti-female. ‘Techno’ was about ‘technology’ but it was very soulful music.”

He produces his iphone, which I’ve noticed never leaves his hand, and brings up a YouTube video of some guy in Germany, known as ‘Techno Viking’, who apparently has over 20 million hits or something, and is dancing, shirt off, in angry, menacing, provocative gyrations. “In my day, I could handle myself pretty well, but I wouldn’t want to mess with that guy,” says May.

It’s true, after 25 plus years the genre has taken a few turns so I question May if he believes electronic music to still be important?” “It’s our livelihood, of course, so it’s important, but it also makes a statement. There’s a soulful, spiritual element to the music,” May replies, and I can’t help but feel the authenticity in his words.

The waiter brings our food and soon it’s obvious Derrick and Sachiko won’t be screening Wall Street 2  or The Town this evening. “You know what,” May says. “We’re with good food and good people, what could be better?” Then, with sincere interest, he shouts out, “Where’s your brother? Why isn’t Nick here? That boy is the coolest.” May and Sachiko dig in.

Two days ago this guy was gigging an exclusive party in Singapore before an audience that included such notables as Richard Branson, Formula 1 top brass, and the owner of the ‘W’ Hotel.  Now, he’s home for 48 hours before leaving again for Europe and he’s genuinely concerned about my family. Around the world and back again, the originator hasn’t forgotten where he comes from.

Another round of vino. “Same flavour?” the waiter asks. We all nod affirmatively and pass the small plates around. Conversation moves from their daughter’s private school, to movies, Bob-lo Island, Jeff Mills (The Wizard), Majesty Crush, to the current suffering of people living in our city, to where Derrick and Sachiko dine when they’re together.

“For carry-out, Sweetwater, wings dinner,” May offers quickly. “If you’re going out to eat, you have to hit the burbs; there are just so few places in the city, unless, you want a good cigar, a shoeshine and a drink, then you want to hit Café Habana.”

Having so many sky miles under his belt, I wonder if May has formed an opinion of how the rest of the world views the Motor City. “You know, it’s funny,” May says, “when I tell people anywhere in southeast Asia that I’m from Detroit they ask, ‘Where’s that?’”

He continues, “In their mind, southeast Asia is the place to be, and Singapore is the Switzerland of Asia, beautiful, expensive, except for the food, that’s why all the big businessmen are there. The Asian people can’t conceive of being anywhere else.”

“When I explain Detroit to them, and what it’s like to live here, they ask me ‘Why’?” May pauses a moment to sip from his glass. “And,” I say, “Why do you live here?” I enjoy the struggle – the fight.”

A true Detroit original and an originator of an art form, Derrick May performs Movement Torino at the end of the month before embarking on a series of southeast Asia ‘soft’ parties that lead to Movement Jakarta.