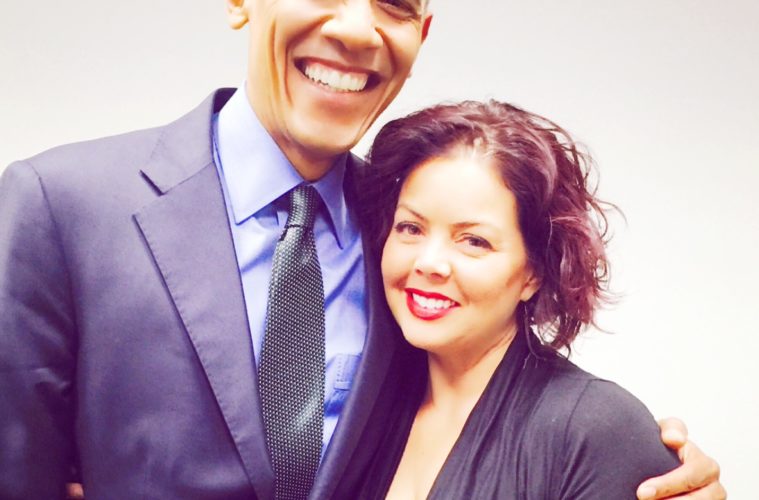 Beauty Mark | At the Request of the President

Pro makeup artist Barbara Deyo recently had the honor of working with CBS News as MUA for president Obama while he was visiting Detroit. Excited to learn about her experience, I sat down with Barbara to hear her story. The following is a transcription of that interview.

“I got a call from Julie Black, Jeff Daniels assistant. She said that I should expect a call from CBS and that they had an urgent job they needed me for. When CBS called, I had it in my mind that I was getting booked to do Daniels’ makeup again. CBS asked if I was available tomorrow. I really wasn’t and I wasn’t sure if I could clear my schedule. The CBS rep told me that it would be worth my while and that my clients would understand. I said, ‘They’re pretty understanding if it’s for something really cool’. The rep said, ‘It’s pretty cool. It’s for the president’. My response was a confused, ‘I’m sorry, for who?’ The rep said, ‘For the president of the United States, Barack Obama’”.

After I hung up, my client walked in for her brow appointment. I had my head on my desk, as I was trying to wrap my mind around what just happened. She asked, ‘Are you okay? Are you laughing or crying?’ I said, ‘a little of both, but it’s good’.

When I said I was hired as the makeup artist for the president she immediately started texting all her friends. Then, I received a call from a representative to get all of my personal info. The Secret Service needed to do a thorough background check. I normally don’t reveal my Soc and date of birth to someone I’ve never met, so I took a leap of faith knowing that Julie Black wouldn’t have sent something shady.

Behold! The “Presidential Puff” and makeup selection used by Deyo

So, I got my kit together, making sure I had everything I could possibly need, but kept it tight since I needed to be mobile. I packed 3 different types of foundation for different levels of coverage, with a range of 5 colors, powders, disposable sponges and puffs. Plus I had to do CBS News correspondent Lee Cowan’s makeup so I grabbed a range of foundations for his skin tone as well.

I arrived at Cobo 45 minutes early, because I was nervous about being late. There were tons of people. While trying to find the CBS crew, my purse strap broke. I just bought this purse so I could tote all the makeup with ease! When I met up with CBS, I had plenty of time to do Lee Cowan’s makeup. He was very nice and completely put me at ease. Being hired to do Lee’s makeup was an honor in itself, it’s a national broadcast and Lee is a highly respected news journalist.

Lee Cowen : I used the Pore Perfecting Foundation in Tender Beige and Foundation Stick in Cameo Beige – foundation first, then concealer around the eyes, and set with Sunlit Powder with a puff, and medium bronzer, all over. I used Blot Powder for touch ups, a colorless powder to take away shine.

We were taken to the Auto Show (NAIAS) floor where they curtained off a section and cleared the public. Every few feet there was a Secret Service Agent. It was surreal! These guys were serious, huge and seemed straight out of central casting, your stereotypical Secret Service Agents, yet everyone was incredibly nice. I could see the President now in the room being led on tour with Auto Show executives.

At this point, I was moved to a holding area waiting to do the president’s makeup. Suddenly, my phone rang and it was my son’s school! They informed me that Quin [son] is sick and has a fever of 103! They said, ‘Quin told us you are a little busy today’. I honestly think they wanted to verify that he was telling the truth when his mom was doing the president’s makeup. So, I arranged for my dad to pick him up.

One minute, I saw the president a ways away and then I turned around and there he was! I was a bit startled. ‘Oh! Hi! Where did you come from?’ (Thinking there was there a hidden door I was unaware of). He shook my hand and said, ‘It’s really nice to meet you; thank you for being here’. I said, ‘It’s my honor, and it’s so nice to meet you too’.

The room was cleared and it was just the president, a Secret Service Agent, and I. President Obama allowed me to trim his eyebrows, and wanted really light makeup. It was wild being so close to his face. A moment hit me, as I realized there are very few people who get that kind of trust; his wife Michelle gets to kiss him, his daughters probably give him pecks on the cheek, and then there are those few who are hired to do his makeup. As I continued working his agent said, ‘Okay let’s get rid of that shine and go’. I said, ‘I’m sorry I’ll hurry up’. The Secret Service man changed his mind, ‘That’s okay, take your time, I know you want to make your president look good’. I said, ‘Yes I do, thank you sir!’ We wrapped, and Obama did a walking interview with Lee Cowan for CBS Sunday Morning.

Applying Makeup On A President

POTUS: Rich Caramel Pore Perfecting Foundation, Sandy Beige Foundation Stick (mixed together around his eyes and blended a bit around the center of his face) and then applied Toast Pressed Powder all over with a puff for more coverage. Then I finished with our dark bronzer on his cheeks, and a bit all over with a large powder brush.

After the walking interview we were then all whisked out, like the bat cave, to the motorcade. There must have been over a 100 cops and a long line of vehicles, which escorted us to the General Motors UAW Hall, where the president gave his speech. Cop cars from all over Michigan flew up the road ahead, making way for the president. Much like a big parade, people lined the streets waving and cheering.

When we were finished, a Secret Service Agent asked if I wanted a picture with the president. I whipped my phone out. Throughout my career, I never asked for photos with celebrities, because I respect their privacy. So when an opportunity like this presents itself I’m grateful. It’s still up for debate who is the bigger name on my resume, Paul McCartney or Barack Obama. I guess it depends in which circle you run. The president was very hip, but with his own unique vibe. He was so easy going that I didn’t feel intimidated. For me, it was such an honor and a lot of pressure to be asked to do makeup for the president of the United States. I realize this is probably a once in a lifetime opportunity, and knowing I was chosen amongst my peers made me feel very special.”

When Barbara finished, I noticed her kit was open with makeup about to be put away. There was a pink puff covered in powder. I asked Barbara, “Is that…the Presidential Puff?”