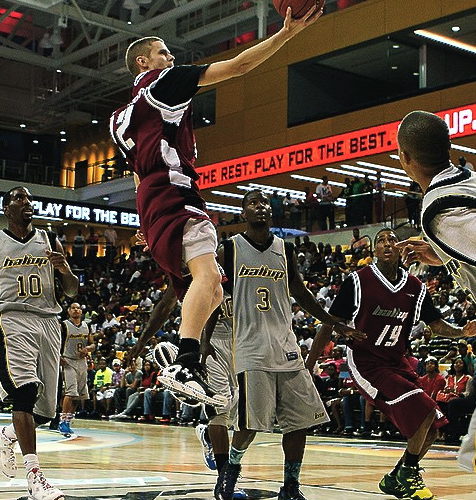 Globally known for wowing crowds in streetball games with amazing ball-handling skills, Grayson “The Professor” Boucher is arguably the most popular streetball player in history. After many years and countless hours of training in the gym, his driveway, at basketball camps, and youth and AAU basketball, Boucher has developed first-rate skills. He has played in more than 40 countries and is considered a basketball icon.

Standing 5’10” tall and weighing in at 150 pounds – not exactly big by basketball standards, even for a point guard – Boucher says he made up for what he lacked in stature with dedication, drive and love of the game.

“I was smaller in high school, which meant I really had to prove myself to earn the starting varsity position at point guard,” says Boucher, who won the position and later was given the moniker “The Professor” for his uncanny ability to “school” opponents. “Basketball was always going to be part of my career, but you don’t have to be a professional streetballer to make mastering an athletic skill  worthwhile,” he says. “Sports teach young people discipline and confidence, offer a form of expression, and keep kids in shape and out of trouble.”

Many of The Professor’s skills have been cataloged and can be easily found on YouTube. At the heart of his on court “lectures” are what seem to be superhuman ball-handling skills, and an ability to surprise opponents with the unexpected. I asked The Professor if he could offer any tips on how to improve a player’s game, and this is what he said:

Born and raised in the small town of Keizer, Oregon, Boucher practiced regularly from 4-8 hours per day. He made a household name for himself during the And 1 Mixtape Tour (2003) where he schooled opponents on the court. Soon, people everywhere were calling Boucher “The Professor”. He has over 200 million views on YouTube, with over 1 million followers. Boucher recently launched Ball Up Streetball, and has partnered with Powerhandz to produce performance enhancing products for athletes.