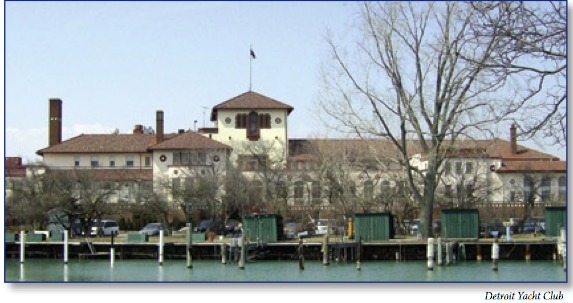 Belle Isle (aka Hog and Swan Island): What did this place ever do to you?

Recently, I had a meeting at the Detroit Yacht Club (DYC). It was refreshing to see what a well- run organization it is. What is most impressive is the building, architecture, grand, old and ageless. Its great history and tradition makes a statement on every floor and in every room. Craftsmen, true artisans built something of lasting quality. The DYC is considered by many to be the finest of its kind in the entire country. It was built with pride and in spite of hard economic times it has been maintained with pride. A well-earned showcase, something the DYC and the city can call its own. For the rest of us, be thankful and grateful it is still here.

There is a fishing pier a short distance from the yacht club, I walked to the end, looked up and down the river, then thought about the drive one must take around Belle Isle in order to get to the point where I was standing. I was reminded of the Belle Isle of some years ago.

I grew up just across the river from here, came here as a kid, like many of us, East side, North side, West side, most everyone came here. Polish, Italian immigrants, beautiful black grandmothers from the Southlands, and yeah, even a few Irish thrown in.

Sundays were picnic days, blankets spread out; the aroma of fresh home cooking filled the air. Some, from the old country, wore coats and many wore ties. A fine mix of families and you know what, most all of them picked up after themselves. Yeah, they diligently put their trash away. They did it as a matter of pride. They knew from their southern civility and European up bringing, you don’t trash Mother Earth. Whether one came from money or not, most from that era knew you have to take care of the land. We live on it, it’s ours, and as our Ottawa brethren knew well, it is a gift.

Belle Isles canals were used for canoeing, woods, giant lilac and shrubs, hide and seek for kids. The Aquarium is (was) the oldest in the U.S. The Greenhouse Conservatory and gardens still radiate beauty. Music, concerts on weekends in the band shell, and a ferry ran daily from the mainland. A fine stable with well cared for horses for riding. Many may remember ice-skating the back ponds and hot chocolate to warm up the winter. Scott’s Fountain is still a thing of beauty at dusk (thank God). The old Casino is used for . . . what?

Now, I know there has been some effort, money and better management to try and bring back to life some parts of this wonderful, historic island gem. An island other cities would truly fight for. There is also an effort to clean up the Detroit River, which is working to some degree.

When I walked the pier back to the waters edge, I looked down on the shoreline. The bottles and beer cans washed up made one’s heart sink and weakened one’s spirit just a bit. Is this place finished? Are we washed up? Is civility and cleanliness gone forever in this town? I think there is a bastion of hope. I think it is the Detroit Yacht Club, still holding its own, with pride and care during a tough time.

Tom Brank is a native east side Detroiter. He worked as a broker in the Penobscot Building during the 1960s and helmed the independent film studio Cinema 1976 on Grand Boulevard through the early 1970s. Mr. Brank now writes from somewhere in northern Michigan.