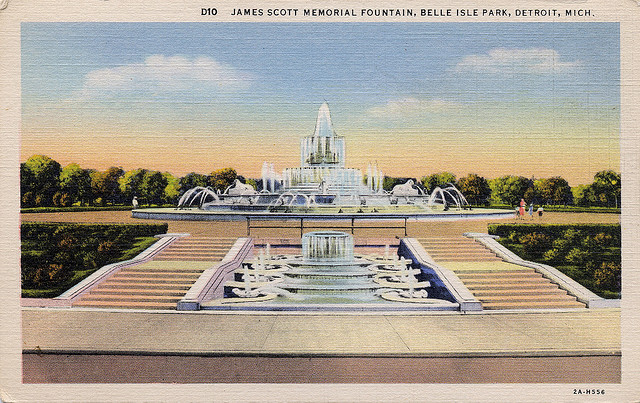 Detroit’s fabled Belle Isle has many historical tales to delight any story-teller. Detroit’s famed historian, Clarence Burton, often told one such story, rooted in historical facts. It was about the notorious James Scott in whose memory the spectacular fountain on Belle Isle is named. Burton often interacted with Scott, an extremely wealthy Detroit bachelor. When Mr. Scott died, Mr. Burton was surprised to be named executor of his will. One of the will’s provisions stated that a fountain was to be constructed with a life-size statue of Mr. Scott. The fountain was to be built on Belle Isle in his memory. 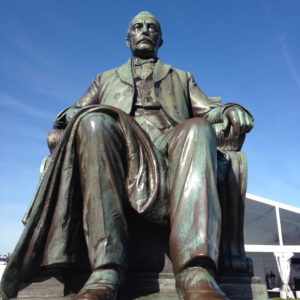 According to a biographical sketch of Clarence Burton by Patricia Owens Burton, published by the Burton Abstract & Title Company, Detroit, in 1953, “There had always been strong public feeling against James Scott, and it surged in opposition to such a lasting memorial. There was great conflict over the issue, as many believed it would be a thing of beauty for the city, and yet, many believed that it would be a gift built with ‘tainted’ money.” However, “after fifteen years of argument in the city council,” Patricia Owens Burton writes, “the fountain was finally erected.”

The famous architect Eugene Duquesne designed the fountain for a fee of $10,000 and, according to the City Plan and Improvement Commission, was employed as its professional advisor. The fountain in its day was referred to as the largest fountain of its kind in the world. In the Free Press of December 7, 1941, “Iffy the Dopester” called the fountain, “Scott’s last joke on the town that hated him,” explaining that Scott planned to punish those who had criticized him during his lifetime by forcing them to look forever on a statue of “his fat countenance.” 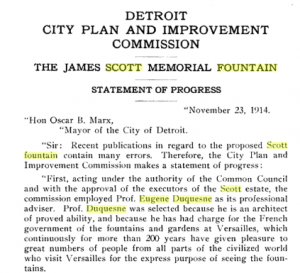 The other famous Detroit historian, Silas Farmer, penned one of the more poetic descriptions of Belle Isle in 1895 when he wrote:

“The island is the priceless jewel in the crown of Detroit; woods of green and waters of blue-art and nature-moving waves and waving grass-stillness and activity-vistas and broad views-beautiful flowers and lofty trees-the white sands of numerous vessels, and the swift motion of great steamers, all alike are combined in the captivating beauties of the favored place.”

Belle Isle is a 982-acre park connected to the East Jefferson Avenue mainland by the MacArthur Bridge. The island was settled by French colonists, who named it “Isle aux Cochons (Hog Island). On July 4, 1845, the island’s name was changed to “Belle Isle” in honor of Miss Isabelle Cass, the daughter of Governor (General) Lewis Cass. Belle Isle literally means “beautiful island” in French.