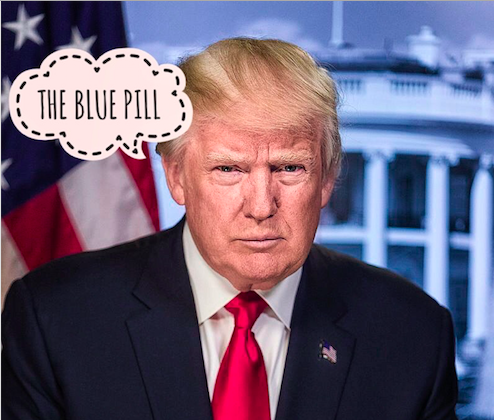 There’s a scene in the Matrix when Neo has a moment of deja Vu. Neo and the crew are climbing the stairs of an aging building when a black cat appears, walks a few steps and immediately does the exact thing again. One of the team members explains that in the Matrix “deja vu” is a glitch in the code, something real and abnormal. The point to take here is not the Matrix definition of deja vu but rather “the glitch in the code”.

During the the past year’s election, I’ve been trying to gather thoughts, collate them, make sense of them and write something that no one will read, but that in the moment I think is brilliant or at least witty which is enough to amuse myself. But no; no thoughts, nothing to collate, nothing remotely brilliant and nothing witty. Especially, not since November 7, 2016.

I’m a big fan of the term “Occam’s Razor”, the philosophical principle that to paraphrase states that, ‘the simplest answer is usually the right one’. I pretty much believe this, and it has been the case over and over and over again in every aspect of life; relationships, science, sports and definitely politics. I don’t give into conspiracy theories in part for this very reason. Most conspiracy theories count on you believing the most absurd conclusions that require collusion amongst many peoples and that ALL of those people will remain silent to protect the conspiracy. That in and of itself is illogical given human nature and the ease at which information rockets across our digital world. In almost every circumstance, in which a conspiracy is cobbled together by someone with or without an agenda, the simplest answer is almost always the true, correct answer, or Occam’s Razor.

And that brings us to the 2016 US Presidential Elections. What the fuck was that? How, why, seriously what the fuck? What we witnessed and were expected to believe was a series of “what the fucks” that make no sense. And to be clear, I’m not necessarily saying this because Trump won – I would’ve preferred between the two rotten options, Hilary (HRC) – I’m saying this because of the multitude of “no fuckng ways” that took place.

Move beyond the point that to most of us we would have preferred choices other than HRC or Trump, but that’s what we had. Let’s move beyond the likability of both candidates, which ranged somewhere between crabs and genital warts, to what actually happened. Stay with me here, it’s important to keep score. One small asterisk; there is no way I can recall or list all of the weird, abnormal shit that took place during the election, so the following is just a sampling:

The race began with the spectre of the FBI’s investigation into HRC’s email server that, depending on where you sat, reeked of partisan politics, or is just more stink that has clung to the Clintons since the 80s. In one Trump rally, The Donald begged Russia to find Hillary’s lost emails, implicitly inviting foreign intervention into our elections. It’s doubtful they took up Trump’s request. It’s more likely they were already deeply involved with hacking our elections.

Russians, WikiLeaks, Comey, Weiner, Comey again, seriously WTF? All of this combined with a flawed candidate and a horribly run campaign caused HRC’s numbers to crumble. But none of it actually makes sense, and now there are reports of Blackwater’s Erik Prince (Betsy DeVoss’ brother) conspiring with Rudy Guiliani to undermine HRC via the NYPD and FBI.

None of this makes sense. If one or two of these events took place, Occam’s Razor would lead us to the simplest answer, which is: One of these players tried to influence the election. But, when you go big picture, and look at all of the players, events and timing, Occam’s Razor no longer fits. Occam takes one look at this and says, “Fuck it”and heads straight to bottle, knocking back shots until reruns of Three’s Company become funny.

Seriously, it doesn’t add up. It’s impossible to have this many random events all leading to one predetermined outcome. There has to be a hand guiding all of these seemingly random events and players. A grand conspiracy is possible, though very difficult (depending on how deep your conspiracy beliefs are) to pull off.

Is the 2016 Election the result of a grand conspiracy?

At this point the answer may lie in the Matrix. Maybe we’re in someone else’s world, where they created the rules and change them at whim. This answer is as plausible as a conspiracy between all of the players mentioned above.

In January, Donald Trump was sworn in as our 45th President. I really wish I’d swallowed the Blue Pill.

Shayne Daley, a sometimes successful, sometimes failed entrepreneur writes from a barstool observing and arguing with the TV or the bar mate next him. An Army vet, would be gypsy, lover of food and motorcycles he reads too much political garbage and not enough Hemingway