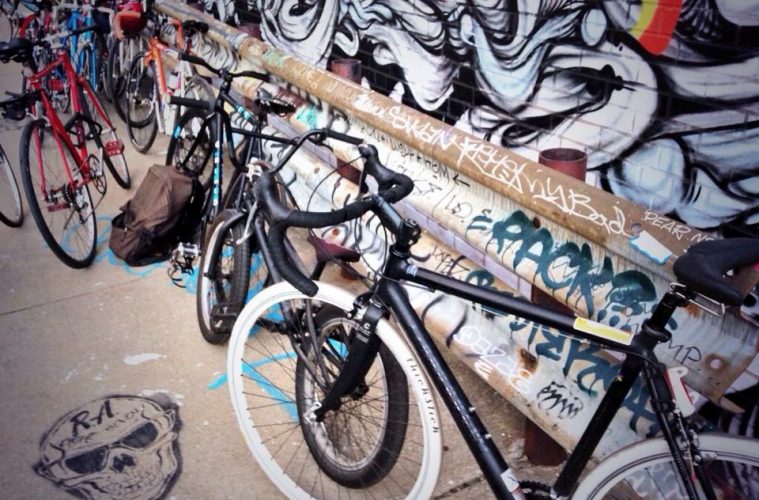 Detroit has the highest pedestrian fatality rate in the nation. According to the National Highway Traffic Safety Administration there are 6.79 fatalities per 100,000 people in the city of Detroit proper. The Alliance of Biking and Walking puts Detroit at number two in biking commuter fatalities in major U.S. cities.

This is an epidemic. Here in the motor city we have, mainly for reasons of industrial primacy, not paid serious attention to our mass transportation infrastructure for a half-century. Last year the Regional Transit Authority Bill was torpedoed due to the antipathy of the ‘burbs while the RTA itself suffers from a lack of stability in management. And, here in Detroit on our over-broad boulevards and across our stately (yet degrading) avenues bicyclists are dying in, what appears to be, increasing numbers.

Jeff Nolish, bicycling advocate/activist/expert, thinks about this stuff a great deal. He did a deep dive into the available Michigan State Police statistics, wondering, “Who is getting hit?” The answer according to Jeff are poor “black or African-Americans.”

This answer ought not to be surprising in a city that is around 80% African American and given the low quality of Detroit’s mass transit system coupled with 40% of the city’s population living below the poverty line, many African-Americans are likely to find themselves on a bicycle. 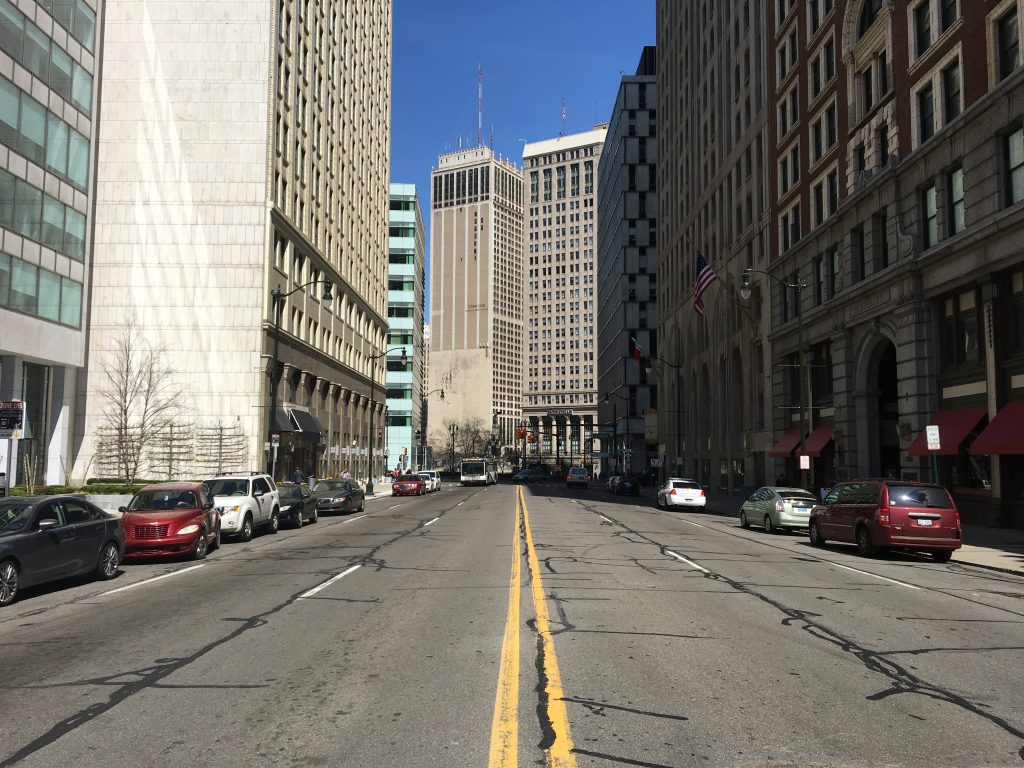 I have been an avid bicycler in the city of Detroit for a pretty good amount of time now. Not as long as many, but just long enough that I can remember being underage and shutting down bars that don’t exist any more, in parts of town that used to be called something else. I remember (vaguely) the time at 3 am we found a bowling ball in the gutter only to begin hurling the thing the wrong way down the carless expanse of Second Street. I think it would surprise most people to know how well a bowling ball will bounce on concrete.

Then one day the people stopped calling it the Cass Corridor and less of my friends could afford to live there, let alone disrespect/endanger person and property with heavy gaming spheres. The long time residents, the middle-aged white artists and the black pensioners began to see their frozen rents thaw as the pricing mercury climbed. Second became a two-way and bicycle infrastructure improved. Suddenly the Hub of Detroit wasn’t the only legit bike shop within five miles. At some point it became possible to go out and eat tapas.

Shared bike lane signs began popping up in places I had never noticed. Last year, to my shock, protected lanes showed up on Michigan ave. The newly painted lanes are barely dry on Cass ave. Shoot, there’s even some on Livernois in Southwest with more planned up on the Avenue of Fashion. This is good; we’re getting there. The danger that automobile traffic poses to bicycles in the city of Detroit is unacceptable. The idea is to create a safer environment for all traffic. The proliferation of this bike infrastructure can only be positive if it is fairly and equitably implemented.

Good bike policy is a microcosm of a municipality’s commitment to social justice. It’s all well and good that we are developing infrastructure near the Pizza-rena, but as small chunks of the city develop by leaps and bounds we “have an obligation to look at people’s mobility and patterns and make sure it’s safe for everyone… I think these things are really important. What we’re getting at is what I refer to as mobility justice,” Nolish enthuses.

But, it’s important to realize the infrastructure needed for safe biking takes many forms. It’s not just what is, literally, on the ground, it’s how we implement policy. This is important stuff to worry about.

And worry about it we should. It’s not easy. Jeff got me thinking about the logistical difficulties involved in maintaining bike infrastructure in the city. Safe and well-defined transportation planning, of any kind, sits at the intersection of effective city planning, public works, and law enforcement, not to mention ticketing and towing. If all these entities are not in lock step the whole system breaks down. Municipal resources will always be readily available in the parts of any city that represent its most robust tax base. The safety of bicycle-bound hipsters and recreational riders in these more affluent and gentrifying areas of the city need not concern us. They are taken care of, but without comprehensive policy and infrastructure surrounding bicycles the cost has been, and will continue to be, paid by our citizens living in the racially and economically defined margins of our city. 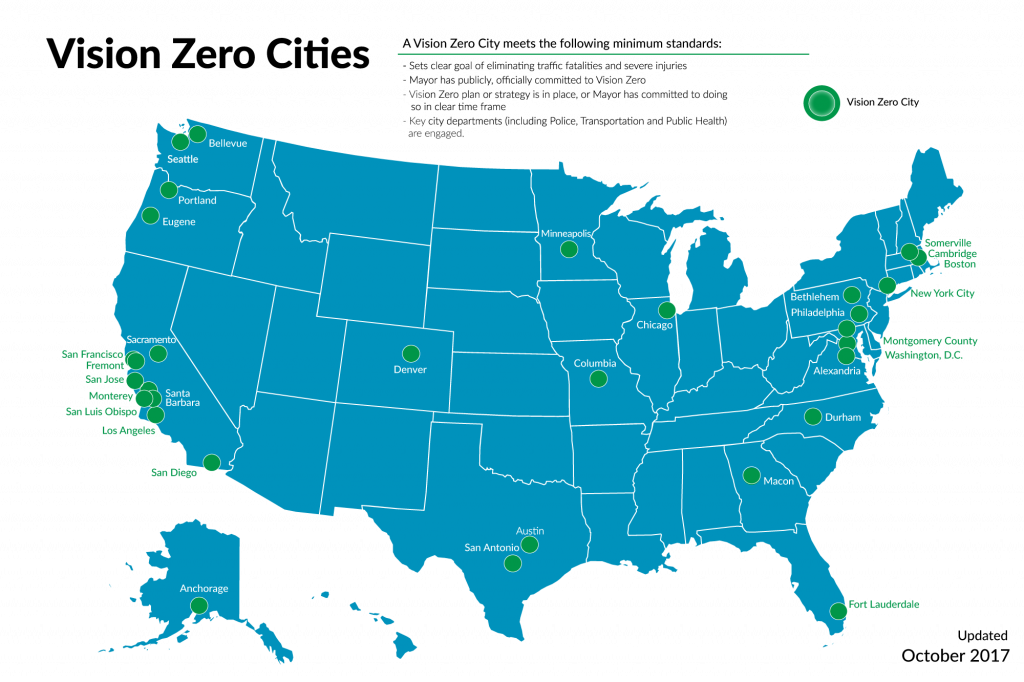 The complicated nexus of city services required to carry out effective and safe transit policy is a major barrier anywhere. Vision Zero is a network that seeks to overcome this hurdle by fostering effective relationships between the facets of government mentioned above. Borne of a wildly effective Swedish program and forged by typically progressive Scandinavian policy, Vision Zero projects a reality where biking fatalities are next to zero. The network has since imported its ideas stateside to massive success in the ten cities it has implemented its strategies. In Boston, Seattle, Portland and San Francisco the strategy of tightly woven municipal/civic planning and cooperation has yielded tremendous fruit. But the network isn’t about metrics; it’s about the implementation of minimum standards. A “Vision Zero” city must have demonstrated concrete goals regarding the reduction of traffic deaths and injury, the mayor needs to have publicly made a commitment with a specific implementation time frame and key relevant departments in the city must have committed to engagement in these goals.

Vision Zero represents an excellent and effective approach to bike safety. Of course all cities come with their own individual challenges and obstacles when it comes to implementing policy. However, Detroit is playing a whole different game. The pure geographic size of the Motor City coupled with extreme population loss makes code and law enforcement a herculean challenge on a scale other American cities cannot begin to fathom.

Additionally, the corporate and civic divestment evident in large swathes of this proud city has contributed to the continued degradation of city services and infrastructure outside of a few handfuls of affluence. These are not intractable issues, but the difficulty in creating a safer city for poor people of color to bicycle, just mirrors the problems that Detroit already experiences with spatial poverty and systemic marginalization.

No figures are available, as of yet, but it is pretty safe to say that the places in the city were protected, or at least committed, bike lanes have been created, streetlights are operational, pavement is in passable shape and law enforcement presence is consistent, less bike related injuries or deaths have occurred.

Where are these places?

They are where affluent people already live or have courted newer development, so: Corktown, “Midtown,” West Village, New Center and Jefferson Chalmers. These are places where a highly visible, wealthier and whiter population has been attendant to a rise in real estate prices. These are the areas that have garnered more city and state monies for infrastructure projects. These places see less pedestrian deaths.

But when there are so many traffic fatalities going, apparently unaddressed, in other parts of the city, excuse me when I cringe a little at the excited espousal of all these bikes in, say “Midtown.” It just feels a little tone-deaf.

I’m conflicted though. I want to see investment in this city I love so much and not have it accompanied by gentrification, but the urban centers in North America that have “redeveloped” don’t offer much in the way of an alternative. The displacement of poor residents appears to be part in parcel with an increasing corporate tax base, at least I haven’t seen many places that have been able to demonstrate an economic alternative on any large-scale. It just sucks that improvements to bicycle infrastructure are often an indicator of gentrification.

Let’s take Seattle for example. Their bicycle infrastructure is incredible. I was just there for a little vacation over the summer and I brought my bike with me. From the outskirts to the city center they have committed and shared bike lanes everywhere. As their improved infrastructure engendered more bicycling, drivers became used to sharing the road. Coupled with a commitment from the civic government (Vision Zero!) Seattle has the distinction of maintaining the lowest per-capita pedestrian fatality rate in the United States. This comes as no surprise to me. Even in the midst of rush hour I never once felt uncomfortable cycling in downtown Seattle.

Here’s the thing though: You can’t afford to live there. As the stats regarding pedestrian injuries in Seattle took a nosedive, the price of the housing stock exploded. Over the past few years as swathes of the Puget Sound became a playground for Amazon employees (a topic of somewhat relevant discussion around here now-a-days), the cost of living skyrocketed. Every other conversation I had while bumming around this major Northwestern port eventually ended with some permutation of, “I love it around here, but I can’t afford it anymore.”

In fact, between 2010 (when Amazon set up shop in the city) and the present the average rent price in Seattle has risen nearly fifty percent according to Zillow. What does this say about the future of bicycle infrastructure in Detroit? Is the only way to stem the pedestrian and bicyclist fatalities in Detroit to fully embrace unequal development in the city? To accept gentrification as the modern cost of an effective municipality? ‘Cause the list of cities with the lowest pedestrian deaths per capita are places like Seattle, San Francisco and Boston, cities where lower middle-income households increasingly can claim no purchase.

I must admit, it’s hard for me to imagine the over 200 miles of bike infrastructure in Detroit existing without the initial investments being made as a sort of proof of concept in the rarefied fantasy land of Illich-ville or Midtown Development. I have no easy answers in this paradox, that the city may become safer for the poor even as they are further forgotten and shoved to the margins.

As poverty becomes the subject of erasure, obscured behind Kid Rock concerts, thirsty pitches to corporate investment and a mortgage magnate’s toy train, I still hop in the saddle of my bicycle. Pedaling down my street, bereft of bike lanes or signs that say, “Share The Road,” I go south and cross Grand Boulevard, past the Fisher Building to the protected bike lanes on Cass. Dodging dudes going the wrong way in the lanes, I nod a respectful hello and wave cars ahead of me at intersections out of fear. Another mile ahead I lock my bike to a shiny new rack and meet my friends for tapas. 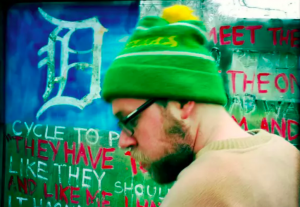