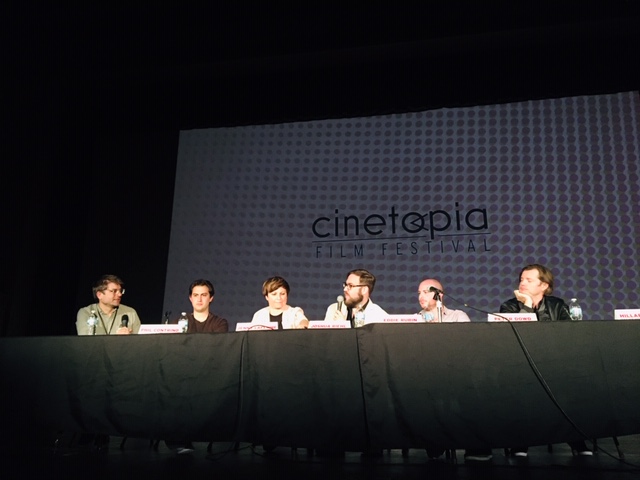 Brought together by Cinetopia’s festival organizer, Ted Houser, an interesting group of indie filmmakers and professionals shared stories of distribution with a crowd of just under 100 persons at the historic Senate Theater in Detroit.

The panel began with National Association of Theater Owners (NATO) representative, Phil Contrino discussing the relationship between streaming video and theatrical runs. While recognizing the difficulty filmmakers face in getting their vision to any screen Contrino was passionate about the necessity for movies to screen in “live” theaters before signing with a streaming service.

Contrino, who cites Stanley Kubrick as his favorite director and 2001: A Space Odyssey as contender for Best Film of All Time, believes that, creatively, a large screen is still the preferred format for movies. He also indicated that a picture receiving at least a limited run on the big screen has a better shot at realizing a profitable deal with a streaming service, like Amazon or Netflix. 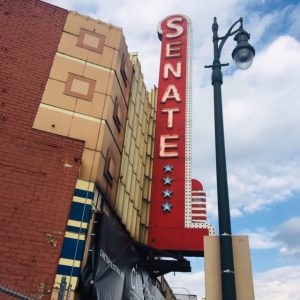 Producer, Jenny Feterovich (AKA Jenny LaFemme) and Director, Joshua Riehl spoke about their efforts in promoting The Russian Five, a documentary on the lives of Russian hockey players who fled the Soviet Union and signed with the Detroit Red Wings. Ms. Feterovich used a bit of that Detroit hustle to screen her movie across the United States in markets that she hoped would support a film based on hockey and politics. She cut deals with theater owners, used her savvy as a touring DJ to approach media, and told the audience to “be prepared to knock on 1,000 doors before you get a ‘yes'”.

Michigan based producer, Eddie Rubin talked about his several experiences in filmmaking, but focused on his work with The Farewell, which held its Michigan Premiere on May 11 at the State Theatre, Ann Arbor. Rubin suggests, “preparing yourself at the writing stage for film festivals and potential distribution deals”. The Farewell screened at Sundance 2019 and was picked up by A24 – a hot production and distribution company that has released Spring Breakers (2012), The Witch (2015), and Moonlight (2016), amongst others.

When the panel concluded the floor opened for Q&A. Several Detroit filmmakers took the mic, shared challenges, and sought suggestions. Members of the audience offered encouragement by way of vocal effects that seemed to embrace the intimate gathering almost as if we were in church giving testimony.

The panel, which also included filmmaker, Peter Michael Dowd, whose documentary, Mr. Jimmy, about Japanese musician and performance artist, Akio Sakurai’s life long obsession with Led Zeppelin’s Jimmy Page, and the duo responsible for The Making of Montgomery Clift, Robert Clift and Hillary Demmon, conversed with an interested audience who seemed happy just to be able to discuss filmmaking with their peers.

Some light refreshments followed in the lobby, where guests mingled with the panel, and very quickly budding filmmakers were busy on their devices, perhaps cutting deals for their own projects.

The Senate Theater seems to be in good shape. A fresh paint job and majestic marquee grace the exterior, the concession stand is in full effect, and I am happy to report that the upstairs mens room remains in vintage order.

For a list of events at the Senate Theater click right here (Or, just a few words back).