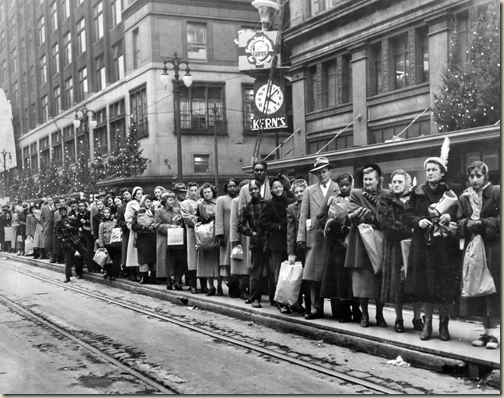 A City Christmas | An Original Carol Set in 1940’s Detroit

On this December morning our mother said, “We are going downtown to shop for Christmas, then go to the show.”  We parked under Grand Circus Park and walked the stairs to street level.  The park and streets were filled with well-dressed holiday shoppers, all who seemed to be moving with pleasant business.  Marquee lights of Adams, Grand Circus, and Michigan Theatre, just down from the park, were glowing in light contrast with a grey sky.  She stopped my sister and I near the corner to say, “Look, look up there”. When we looked, we saw a large billboard high atop a building.  It was a picture of a man with an open mouth and the word Camel. A few seconds later the man blew a smoke-ring that grew larger and larger, and then disappeared.

We walked through the crowd to Woodward and Hudson’s storefront and then stood in line to spend a minute looking at each and every Christmas scene in the windows – A small memorable event but almost mandatory for every child in the city.  A Salvation Army bell was busy chiming in its cheer and mom lifted my sister, with red-rosy cheeks, to place a dollar in the red kettle.  Just down the block we passed the tall, large Kern’s clock landmark to the department store’s entrance.  Inside, we rode an escalator going up to look for leather gloves. It made more noise than other escalators and I looked down to see the slates were made of wood.

On the corner, a vendor was calling “hot peanuts, hot peanuts” as we crossed.  Then magically, Bing Crosby began singing White Christmas and the music floated up through colored lights wrapped in green garlands hung over the busy avenue.  We went into Kresge’s Dime Store and looked at a hundred different things.  Hot chocolate with sandwiches in Sanders downstairs was next before coming again to brace the cold, then cutting through Book Cadillac Hotel to the fine shops of Washington Blvd. to “Ohh and ahh” and wish.  We strolled up, down, and lastly over to Sero’s, where we stood hand in hand watching chicken and ribs turning, dripping and browning on the rotisserie.

Bright, rich lights of the beautiful Michigan Theater invited us in.  We sat with warmth, safety, and quiet in the cathedral, listening to hundreds of others whisper softly.  Bugs Bunny opened with a cartoon and quickly hooked the audience with wit and humor.  It was a double-feature night with a newsreel in between pictures.  Charles Dicken’s A Christmas Carol began, and soon ghost spirits of Christmas past gave us all the spirit of Christmas to be.  Then mom, as usual, tapped me with her elbow to say “Look, what a fine actor Mr. Sim (Scrooge) is”. I learned then movies are a place where fears can subside and make people happier.

Leaving the theater found us in light snow dancing all around.  We drove east to Grosse Pointe and Lakeshore Drive to see the lovely homes decorated.  The Pointes, with its evergreens, were covered with huge snowflakes in a blanket of white quieting the earth.  Beneath that were wonderful glowing lights of Christmas color, each one draped on every eve, bush, and tree.  One by one, each home seemed larger than the next, until the largest, the massive, beautiful mansion of Horace and Ana Dodge, Rose Terrace, a sparkling gem in lights of joy and cheer.

The drive was something we would do every Christmas from that night on, just as hundreds of families did.  But, this night Mom sang carols all the way home.

Home, a place to dream and laugh, and think of Christmases past and present.