Ever since the organization of people to meet for social, political or other human activities, there has been an overarching need for a place to hold such meetings. As populations grew, the requirement for larger spaces also grew.  This was the backdrop for the construction of “Detroit’s Great Meeting Hall.” Today, we call it Cobo Center.  Before that, we called it Cobo Hall. 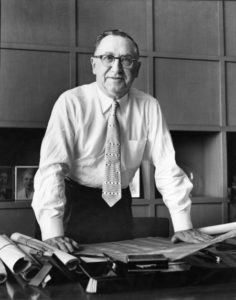 Owned by the City of Detroit, it opened in 1960 and was named after former Detroit Mayor Albert E. Cobo. It was Mayor Cobo’s vision to build a convention center. Mayor Cobo died in 1957 and did not live to see his idea transformed into reality. The design of Cobo Hall (Center) started in 1950. Architect Louis Rossetti was awarded the project for the architectural firm he founded, Giffels & Rossetti, a predecessor of Rossetti Associates, which separated from the Giffels family in 1979. In 1954, the architectural firm hired a new employee, Louis’ son Gino. Gino rolled up his sleeves to work on the early Cobo Hall planning and design.

Gino Rossetti, FAIA, is still active with his son, Matt Rossetti, FAIA, who is President & CEO of the aggressive, growing architectural firm located in downtown Detroit. The firm had an office near Cobo for many years and then moved to Southfield. It then relocated its headquarters to the modern, former offices of the Federal Reserve Bank, 160 West Fort Street, Suite 400, where it has become a tremendous design- innovation force in Detroit’s central business district. (Its websites are: www.rossetti.com, and, [email protected].)

“It started in 1950, with the original design siting the building between the Detroit River and Jefferson Avenue,” Mr. Rosetti said. “It wasn’t until 1953 that they thought of the idea of spanning Jefferson Avenue and going from the original 100,000 sf to just over 400,000 sf…quite a feat for its day.”

Out-of-towners may be interested in the fact that Cobo Center is located on the site where Antoine de la Mothe Cadillac, a French colonist, landed on the banks of the Detroit River on July 24, 1701, and claimed the area for France in the name of King Louis IV.

Since the early design phase beginning in 1950, its opening in 1960, the convention complex became even bigger when renovations and expansions were completed in 1989. At a cost of $225 million, it nearly doubled in size to 2.4 million total square feet. In 2009, the Detroit Regional Convention Facility Authority (DRCFA) took over the operations of Cobo Center, from the City of Detroit, under a collaborative agreement with the Michigan State Legislature, the City of Detroit, and Wayne, Oakland and Macomb counties. Thereupon, the DRFCA began $278 million upgrade of Cobo Center. Upgrading of Cobo Center continues to this day. Readers may also be interested that a new film is in the works to document Cobo Center, its history and showcasing all of the world-renowned entertainment acts, political events, and other significant meetings held at the facility.

The 12,000-seat “Cobo Arena” that is connected to the main convention area was the home of the Detroit Pistons from 1961-1978. It has hosted concerts by such acts as The Doors, Jimi Hendrix, The Who, Bruce Springsteen, Kiss and many others. I forget the year, but your writer attended a Cobo Arena gig featuring The Village People. In fact, your writer has many memories of events he attended at Cobo. These include the 1980 GOP Presidential Nomination Convention, the time he took his mother and father to a Presidential Dinner, and all of the Detroit Economic Club luncheon meetings, featuring the most important speakers of the day. Not to forget, all of the interesting table conversations with fellow club members Stanley Kresge and Walker Cisler.

This month, hundreds of journalists, suppliers, auto executives, and exhibitors will be flying in and out of Metro Airport for the 2015 International Auto Show. The Press Preview will be held January 12-13, the Industry Preview segment January 14-15, the Charity Preview January 16, and the Public Show January 17-25. Visitors may find these websites of value: The Metropolitan: www.themetdet.com, Auto Show: www.naias.com, www.Cobocenter.com