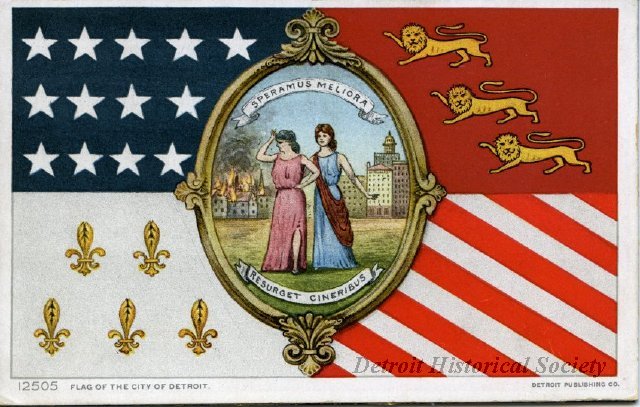 You say Detroit I Say d’Etroit

I enjoy reading the Metropolitan and am glad that it has introduced a new, somewhat unorthodox, perspective to the cultural and entertainment scene in Detroit. Thanks for producing it.I would like to bring to your attention that Detroit’s original French name is usually mangled beyond belief, a situation that is easily rectified when one understands the French language. The masculine noun _detroit_ means a strait, channel, sound, or narrow firth according to Cassell’s French Dictionary. The preposition _de_ means _of_  or _at_in general, and becomes du, de la, des, or d’ depending upon what it precedes in the phrase. It is pure coincidence that the preposition _de_ and the first two letters of _detroit_ are the same and they should not be confused or unnecessarily combined in this context.

The original foundation at what is now the City of Detroit was Fort Pontchartrain, named for Louis XIV’s Minister of the Marine/Finance who sponsored Cadillac’s strategic foundation at the narrow body of water, which gave the French control of the Upper Great Lakes to thwart British expansion, and gave the City its beginnings as a globally engaged community of strategic importance.  (A tradition of naming fine hotels after Count Pontchartrain has been a thread in the City’s history since the nineteenth century.) As such the French foundation’s  formal name was Fort Pontchartrain du Detroit or Fort Pontchartrain at the Strait. _De_ becomes _du_before a masculine noun such as _detroit_. There is an ‘accent aigu’ on the e’ in _de’troit_ causing the _e_ to be pronounced long as an ‘A’ in English, and giving the pronunciation: Day’twa. Le De’troit is the shortened form.

As I was reading the article _”Henry Ford Scales Up the World” in the October issue 2013 and saw that the author was presenting _Fort Pontchartrain d’Etroit as the linguistically and historically accurate origin of the City’s name, and using a Wikipedia link for verification, I thought I would bring this to your attention as the editor.

Best and good luck for the future success of the ‘au courant’ publication,

Director | Board of Directors | Preservation Detroit

Thank you for your thoughtful email and for your concern.

One of my favorite books on the history of Detroit is the two volume, Tonquish Tales by Helen Francis Gilbert, Pilgrim Heritage Press publishers, Plymouth MI, 1984. In it, Gilbert describes Antoine Laumet’s arrival and his naming of Fort Ponchartrain d’Etroit. Gilbert’s bibliography includes over 100 sources.

Regardless of debate, confusion, change in French language, dialect, proper grammar or current acceptance, I had made the decision to go with Cadillac’s spelling. I had also hoped to provide more historical coverage of Cadillac in each issue than we have, and to make the change around the 5 year mark to “Detroit”, with explanation of how the area changed hands from Native, to French, to English, to American. Perhaps, we will still be able to do so.

As far as the writer of the piece in question, I am to blame for changing his spelling from Detroit to d’Etroit, as I sometimes like to keep consistent with the name of the publication. In hindsight, I should have left it alone, as he was discussing events during the time of Ford.

Thank you once again for your note, 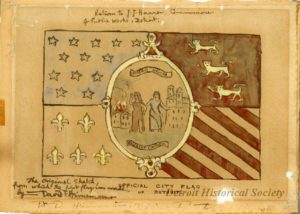 Thanks for the rapid and interesting reply. I don’t believe that Gilbert can be correct, however.

Cadillac did not name Detroit. He established and named a fort at the already named site. From the recent Michigan Historical Society article “Sacre Bleu! The French are Still Here” in the Spring, 2012 issue of MHS Chronicle 35, I quote: “The name ‘le de’troit’ was coined by the French missionaries Rene’ Brehant de Galine’e and Francois Dollier de Casson, who were the earliest known Europeans to traverse the river in 1670. Additionally, Galine’e drew some of the first maps of the area.”

In W. Hawkins Ferry’s _The Buildings of Detroit’ he reproduces the famous 1764 map of the area by deLe’ry (the most prolific cartographer of Detroit during the French period) that is in the Burton Historical Collection. It is titled “La Riviere du Detroit et Plan du Fort du De’troit.” In the recent publication Frontier Metropolis: Picturing Early Detroit 1701-1838_by Brian Leigh Dunnigan several of the earliest maps are reproduced, all having the title “Plan du Fort du Detroit.”

That being said, I looked at a 1993 program printed in France for the Madame Cadillac Dance Theatre of Detroit which was performing there, and it gives as the title Madame Cadillac Premiere Dame de Detroit, which I would have thought should be du Detroit, but might change to de in modern French as Detroit is now a proper name rather than a common noun.

Also in a brief history of the City it reads:

This is very puzzling indeed as City of Detroit should be written La Ville du Detroit or La Ville de Detroit at least. Somewhere along the line the double _e_ in de Detroit has elided to d’Etroit but this is nonsensical as the noun is _detroit_ not _etroit_ and even with elision in French it would be Ville de Detroit or maybe Ville d’Detroit. So I am greatly puzzled by that. Perhaps, the modern French are confused about the historical origins of the name?

It appears that the official historical sources give the city as Le De’troit or Fort Pontchartrain du Detroit. One could check with the History Dept. at WSU or other local universities where they have professors of Michigan history, and of course there are French Departments in each of them as well for grammar veracity.

Thought I had cleared this up but it looks like there is more than meets the eye, although I think my historical explanation is accurate and I would use the official maps myself as authoritative as they were prepared for the King.

Flag of Detroit, 1907, by David E. Heineman. The white field, with fleurs-de-lis represents France under the House of Bourbon. The red field, with lions, represents Great Britain. The stars and stripes represent the United States. The center oval is the city seal, which represents the fire of 1805, and those who rebuilt Detroit.