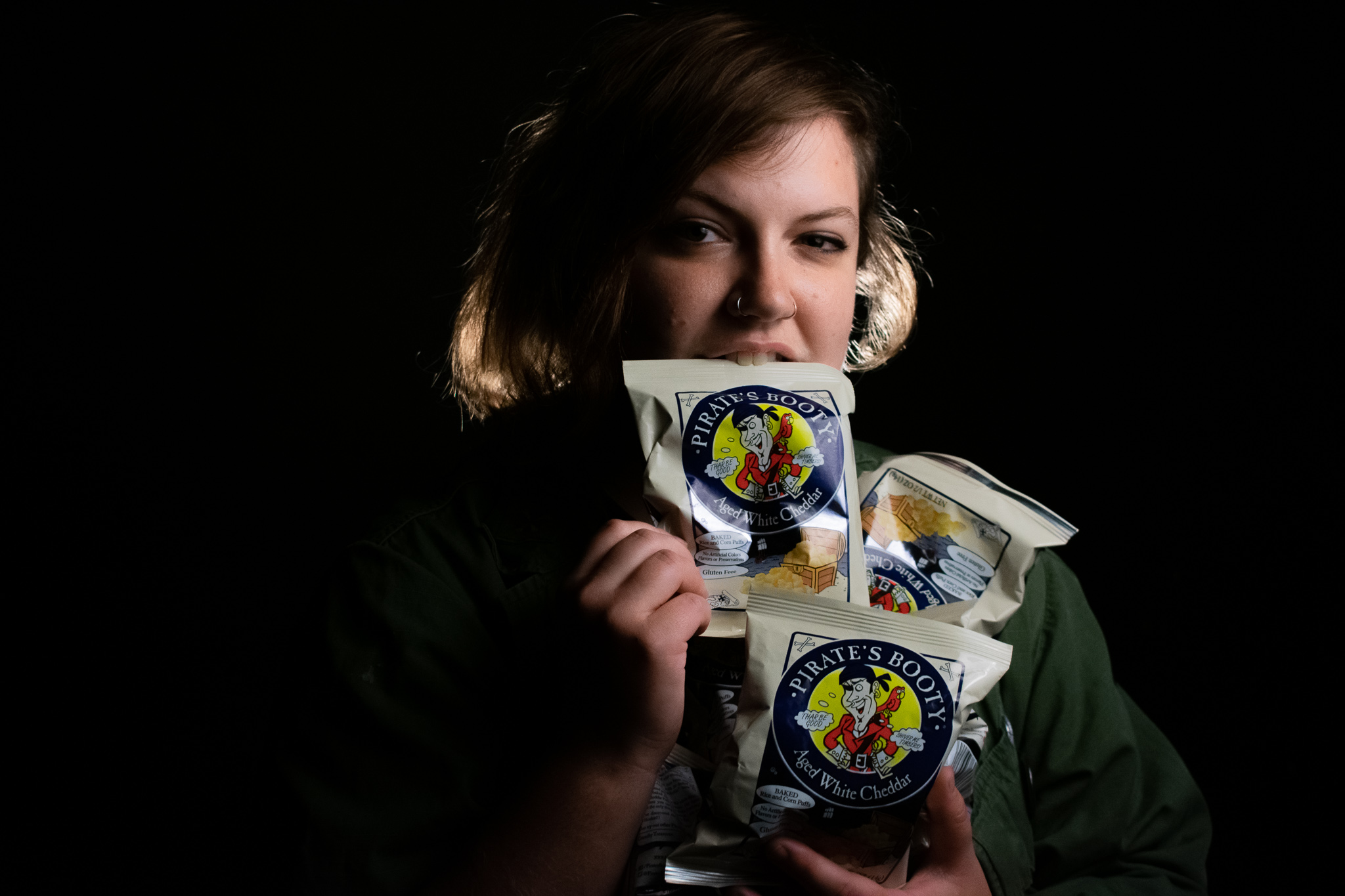 Connor Meade | Let Us See Where My Mind Takes Us

But, I’ve seen Connor up close at The Independent Comedy Club in Hamtramck and have to say she’s pretty funny. Perfectly suited for Host of that stage. As far as I’m concerned all she has to do to headline is be funnier. Simple as that. And, work on her timing. And, possibly, her delivery. Aaand, maybe, lean on #metoo just a little … If she does all of those things, and if she’s lucky enough to have all the other Stand Ups cancel on a night when she’s all ready hosting, then I don’t see any reason we won’t soon be able to witness the comic genius of Connor Meade … Headliner!

Until then, we will just have to satisfy our desire to know more about this local legend, who has been killing it on stages in New York and throughout the Midwest, including a recent win at Comedy Rumble 7, where Conor elicited more laughs than 29 other comedians at Ann Arbor’s, Comedy Showcase, by focusing on the following in-depth interview, which by any standard should be hailed as a milestone in Q&A. 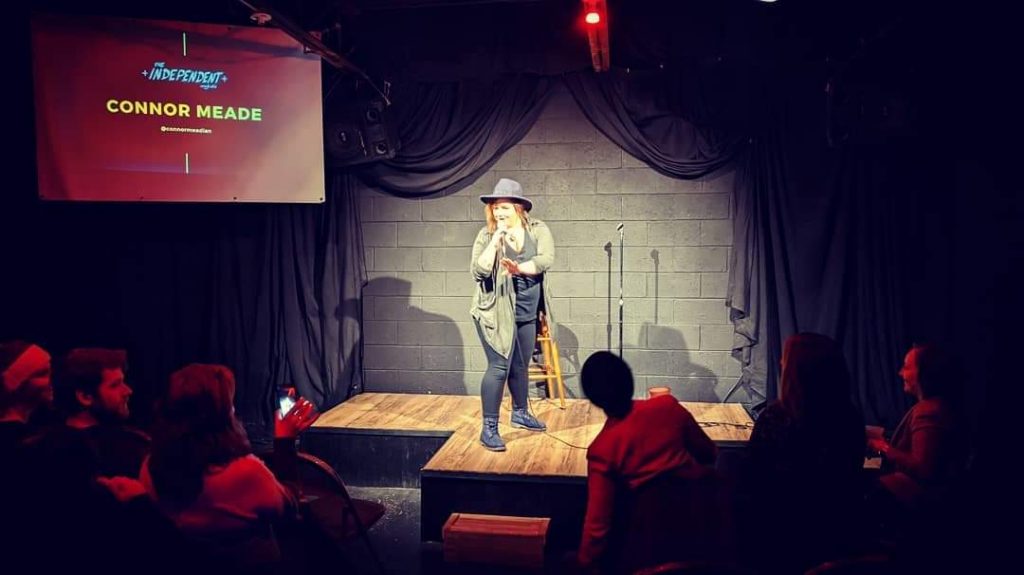 Anthony Brancaleone: Not sure what’s funnier, Connormedian for an email address or a Yahoo! account. Though I shouldn’t talk, as I came at you through GoDaddy! But, Yahoo! does sound like an email for comedians, doesn’t it?

Connor Meade: I mean you exclaim “Yahoo!” when you are having a good time, so I like it, its my fun party email. Also they apparently read your emails, so you don’t have to, they’re very considerate.

AB: Is AOL funny or tragic?

AB: I caught you awhile back hosting The Independent and thought you were great. Tell me a bit about how you got involved with the club and a little about the philosophy of the crew.

CM: Thank you! We had a show called “Tonight vs Everybody” at Planet Ant with a few of the same producers. Bart [Dangus] was definitely the one who got the ball rolling when he asked Darren (guy who runs Planet Ant) about an empty room they had behind Ghostlight Bar. It was used for storage but we thought it was the perfect size for a little club. Darren thought it was a good idea so we cleaned it out and started planning. Darren has been 100% supportive and helped us literally build this club. We started off as a big wooden block as a stage and a foldout table as a bar. But, we are constantly building and renovating the club.

AB: Anything interesting tucked away in that empty room?

CM: Random storage shit, fold out chairs, as soon as we got the speakers up we were like, whoop! Comedians are the worst construction people. Not very safe. I did cut Leslie Ward (comedian) with a box cutter. The whole set up was hilarious.

AB: Sounds like Leslie should have been more careful.

AB: As I understand it, however, comedians do a good job running the comedy club.

CM: This place would be nothing without the awesome comedians who also help run this club; Bart Dangus, Alex Bozinovic, Johanna Medranda, Brett Mercer, EJ Watson and Jason Brent. We all work very hard to keep this place going. Our goal is to simply have funny people on that stage, no matter how dirty, crazy or different the person may be. If they make people laugh they have a spot. The other clubs around here seem to have the same kind of “straight white guy” headline most of the time, with cookie cutter “My wife’s a bitch!” jokes, and that shit is boring. A lot of comedians have to change their act to fit into those clubs, while we want comedians who say “Fuck you this is me and what I want to talk about.” 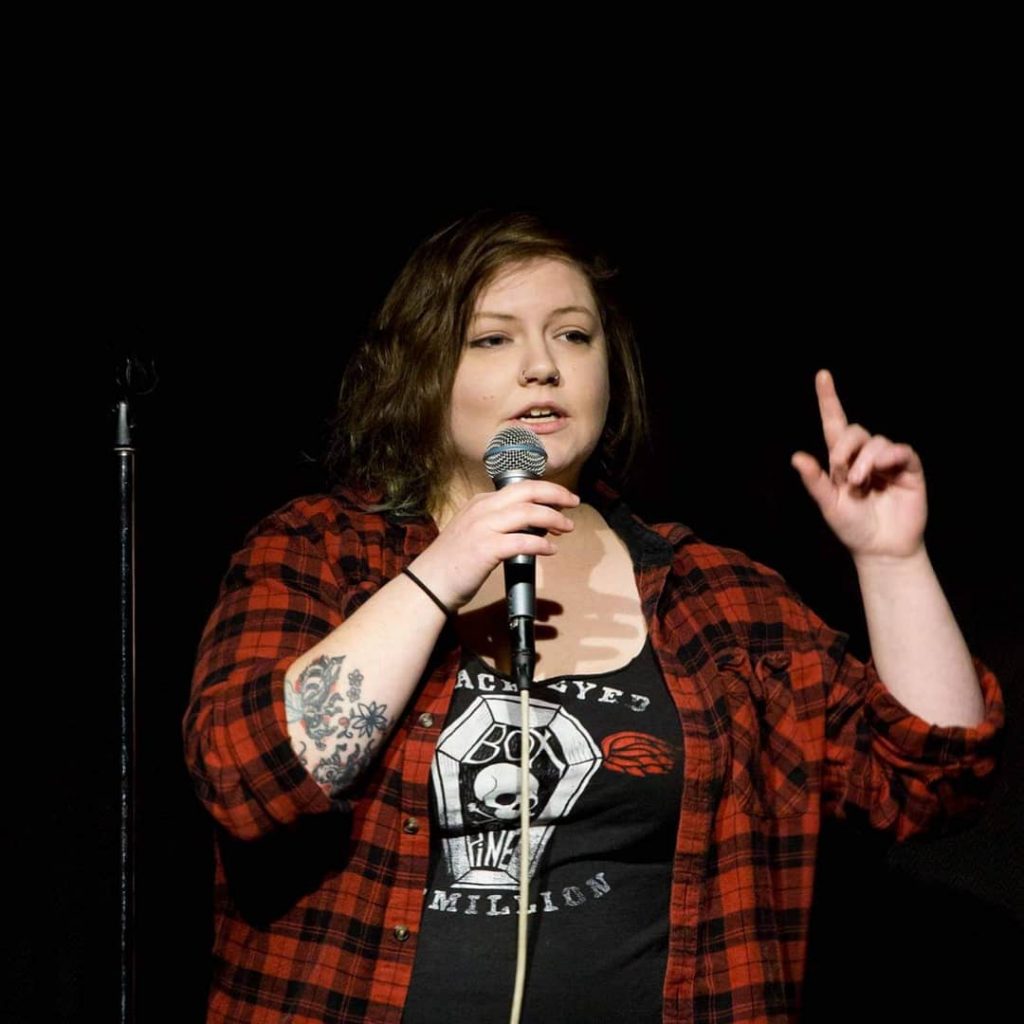 “I’m lesbian enough to know about the second clitoris men will never find.”

AB: Outside of the Independent, are you touring?

CM: Two other comedians (Johanna Medranda and Carolyn Paul) and I just went on an awesome tour to NYC back in October. I’m always working around the midwest.

AB: How is an act different from Hosting a gig?

CM: My act is on the dirtier/darker side, but I also have my silly light-hearted jokes, a lot of self-deprecating and observational jokes. I’m all over the place, so far I have 30 minutes of, “let us see where my mind takes us.” Some of its connected some of it’s not.

AB: There seems to be a good deal of debate over what constitutes appropriate comedy these days. Are you running into any of that?

CM: It totally depends on how the joke is executed and who it’s punching at. Nothing is off-limits if it’s funny enough and isn’t just someone trying to be edgy and hurt people on purpose. Also I don’t feel bad for canceled comics, everything you say has repercussions. Too many people try to blame the audience for being “too pc” but really the comic just sucks.

AB: What is the definition of funny?

CM: I’m pretty sure it’s something that makes people laugh.

AB: Is there a difference between being funny and having a ‘good sense of humor’?

CM: I think so. There are plenty of people who love comedy and laughing, but aren’t necessarily the funny person. Just like I know I like music even though I can’t play an instrument.

AB: Do you find that most comedians have the same approach to Stand Up or is everyone a bit different?

CM: There is a formula to what a joke should consist of but you can use it however you want. There are always going to be people who stick out and people who think too hard about the formula and become boring and blend in. I have never been good at sitting down and writing. Most of my jokes are just aha! Moments, I end up rushing around trying to find something to write on, then work it out at open mics. I’m an asshole who has had to pause a conversation because, “Oh, that would be a funny bit.” There are tons of comics who are able to sit and actually write out jokes that are hilarious and I’m extremely envious of it.

AB: What’s so funny about the ‘Straight White Male’?

CM: The phrase itself isn’t funny, but the ways we can make fun of them are endless, which can be funny. They’re so sensitive now.

AB: Tell me something funny about lesbians that non-lesbians wouldn’t know.

CM: Well, I’ve only been with one girl, so honestly I’m only like 4% lesbian, but just lesbian enough to know about the second clitoris men will never find.

AB: Hmmm … and, the funniest thing you’ve seen in the last week?

CM: Saw a dog try to run on a hardwood floor and they just slid around like a cartoon character, tripped on themselves and then farted when they hit the ground, it was beautiful.

AB: Can you opine on the importance of the Stand Up in society today?

CM: Shit is so chaotic and stressful, how can we not laugh at it? Laughter releases endorphins which we all need more of. Laughing is fun. hearing opinions of people who look at the funny side of tragedy is a more fun way to get through it.

AB: A lot of Stand Ups are making Big Money touring and through live HBO and Netflix specials. How does a Stand Up cut through the noise and make her way as ‘one to watch’?

CM: Of course my main goal is to be that successful,  but my smaller goals are just being able to pay my bills with comedy. I want to travel and be on the road constantly so living in a van is my ambitious 5 year goal. Any comic that is vulnerable and themselves is always someone who stands out to me. Don’t voice or think you have to look and move a certain way, you can lie all you want, but at least tell it like yourself. That’s my dumb opinion though.

AB: What about some Stand Ups that you love who we need to know about? And, what venues do you like performing in?

CM: This is hard because my list of hilarious Detroit comics is so long,  but my top 3 are Josh Adams, Samantha Rager, and Melanie Hearn are my favorite Detroit area comics. As far as venues go, i Feel like the cooler the building and nicer it looks the less people there are. I thrive in a shitty dive bar with regular cheap drinks.

CM: For the most part it happens accidentally, I haven’t heard of many people actually knowing they stole a joke and try to keep doing it. But it’s happened.

AB: Should there be humor during sex?

CM: There can be, like if I queef I’d rather the guy laugh with me about it than get all awkward and try to ignore it. Just like farts, queefs are always funny.

AB: Ever say anything funny to a cop?

CM: I don’t goof around with cops, I can’t afford a ticket and a lot of them have too much of a power complex to take a joke. Other than my dad, who is a cop, we goof around, and he only gave me a ticket once for it.

AB: Speaking of dads, what did it feel like when you finally ‘came out’ as a Stand up? Did your friends and family, especially a father who was a cop, support your efforts?

CM: It was exciting and terrifying. Nothing worse than saying “I’m doing this thing!” And having support and people coming out to see you and then you suck at it and quit, which was a big fear of mine. My parents are pumped that I found something to do with my time other than work whatever dead-end job until I die.

AB: Like many, I believe humor has the power to heal. Few things feel as good as having a great laugh. What does it feel like to be on stage delivering jokes that make that happen?

CM: It’s my favorite feeling in the world, it is an adrenalin rush, it’s the same feeling as winning something. It makes everyone in the room feel better.

CM: I feel like this is a setup for a joke…