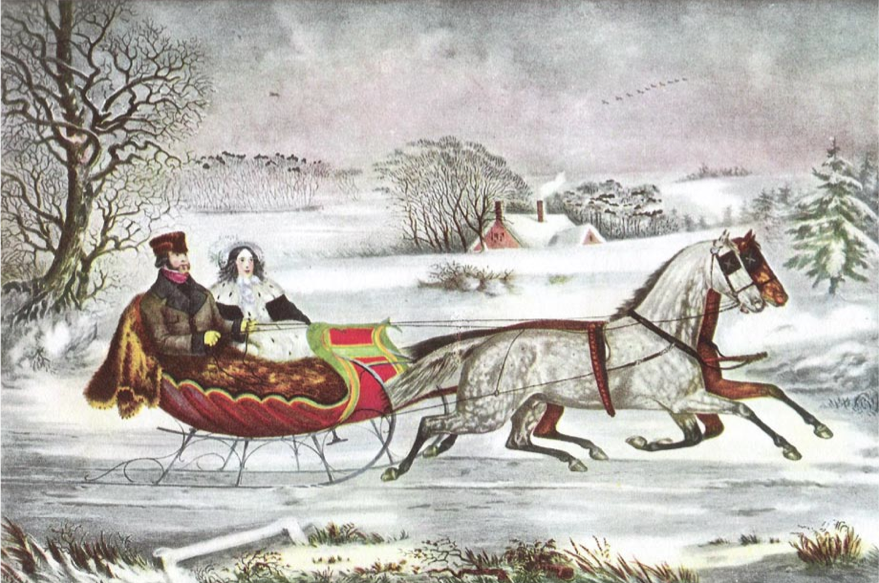 IN THE EARLY nineteenth century pictures were reproduced by relatively slow and unwieldy means – woodcuts, copperplates – when European and American engravers began working with a new process known as lithography.

Invented in 1795 by a Bavarian named Alois Senefelder, lithography was introduced to the French in 1816 and used in London in 1822 – although, American painter, Bass Otis, was already experimenting with the craft as early as 1919. But, it was a Frenchman named Dubois, who after being brought to the States by the Pendleton Company, proceeded to earn the title of being the “first true lithographic pressman” in America.

By 1828, Pendleton found itself in need of an apprentice and the position was granted to a 15-year-old boy named Nathaniel Currier. Thus, Nathaniel’s education was underway and he quickly recognized the potential of the trade. As luck would have it, Pendleton eventually sold his share of the business to Currier and after a brief stint in 1834, with an unsuccessful partnership, Nathaniel Currier moved to New York and established the “factory”

FOR YEARS Nathaniel Currier worked with his brother Charles. The two were business associates and though Charles utilized space at the “factory” he also ran a business of his own, which eventually led to manufacturing new lithographic crayons that proved to be superior to the French.

“ There’s a happy feeling nothing in the world can buy, when they pass around the coffee and the pumpkin pie, it’ll nearly be like a picture print by Currier & Ives, these wonderful things are the things we remember all through our lives . . .” ~ Sleigh Ride, Anderson & Parrish

The firm of N. Currier was charmingly advertised as being able to provide inexpensive “Colored Engravings for the People”, but on January 13, 1840, when the steamboat Lexington caught fire on Long Island Sound, artist W.K. Hewitt, working for N. Currier, Lith & Pub, created what was probably the first illustrated extra in history; “Awful Conflagration of the Steam Boat ‘Lexington’ in Long Island Sound on Monday Eveg. Jany. 13th 1840, by which melancholy occurrence over 100 persons perished”

The print immediately captivated people. Presses ran day and night to supply newspapers all over the country with this new and ingenious form of information. N. Currier became an institution for accurately documenting human events. For the young firm the ‘best-seller’ image opened up an industry dedicated to providing newsworthy pictures of life and circumstance – reproduced and published quickly – and it skyrocketed the firm on a half-century of success as “ Printmakers to the American people.

Then, in 1852, Charles Currier informed Nathaniel that his wife’s sister had married a young lithographer and enthusiastic art lover, and that it might do them well to hire James Merritt Ives as their bookkeeper. Within five years, James was made partner and the firm became Currier & Ives.

The junior partner not only had a discerning eye, and good taste, but he possessed a strong sense of what would be salable, soon having as much to say about what prints would be accepted as did the brothers Currier.

CURRIER & IVES portrayed their times with fastidious detail, giving the public pictures that were typically American, easy to appreciate and affordable to the average man. Their stable of talent produced honest prints with a simple grace that has continued to reach Americans for over a century and a half.

Presented as a gift by his employees, “The Road, – Winter”, 1853, depicts Nathaniel Currier and his wife, driving their sleigh on a fair winter’s afternoon, which, along with other works, like “Central Park In Winter” and “A Brush for the Lead”, influenced the writing of Leroy Anderson and Mitchell Parrish, as they penned the words and music to their holiday classic, “Sleigh Ride”, almost 100 years later.

Vocalists from Bing Crosby to Johnny Mathis have sung the famous line – “It’ll nearly be like a picture print by Currier & Ives . . .” evoking imagery of a more perfect time, while acts as varied as the Ronnettes to the Brian Setzer Orchestra have all covered “Sleigh Ride”, which has consistently remained in the top ten most performed songs during the Christmas season since 1950.

The works of Currier & Ives are sincere representations of an era lost to history. They are now a part of Americana and embody a record of our nations culture, with such artistry and authenticity, that they will forever be remembered as America’s first printmakers.