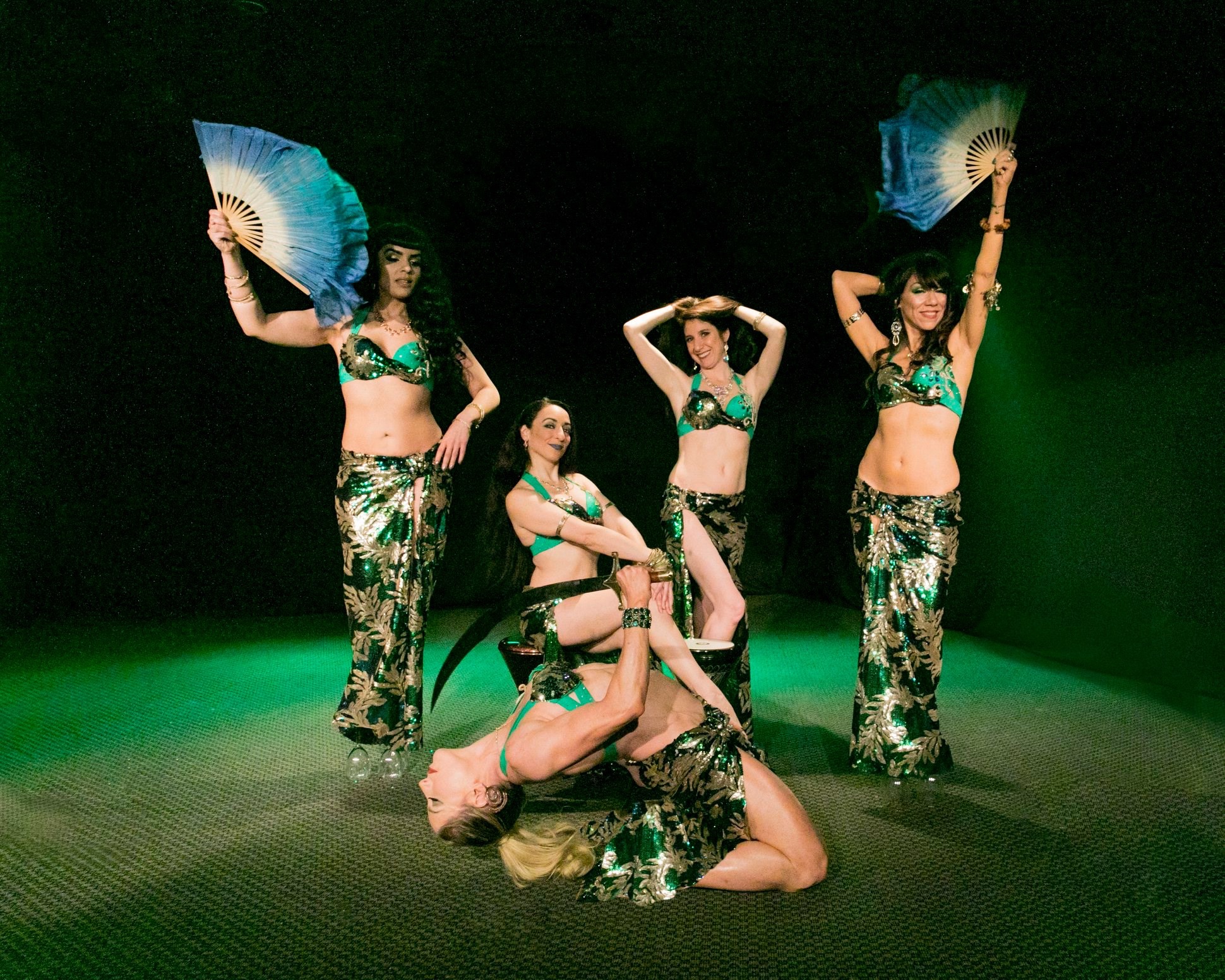 Dancing on Tarab | Music, Dance, and A Vision of Grace

If you’re a Detroiter who desires a better understanding and a deeper appreciation of Middle Eastern dance, here are three suggestions.

Watch the 2004 documentary film, American Bellydancer; visit the Arab American National Museum in Dearborn at the earliest opportunity; and make arrangements to see Dancing on Tarab on March 31 at O’Mara’s in Berkley. We are especially keen that you follow that third option.

Why? Because seeing  Middle Eastern dance  performed live is the ONLY way to grasp the grace and discipline that exemplify this timeless expression of joy.

Going will also give you the opportunity to appreciate the work that Elvana Dedvukaj has accomplished in a comparatively short time. The woman who founded this ensemble is a nationally acclaimed performer and instructor who “discovered Middle Eastern dance by accident” and proceeded to make it a more visible ingredient to the city’s cultural identity. She has garnered awards and kudos. She has appeared on television. She has linked her artistic efforts successfully to a number of humanitarian concerns. That’s an impressive resume to result from a very happy accident.

1 What does Dancing on Tarab mean or signify?

Tarab is an Arabic word and there is no real equivalent for it in English. But what it describes is that feeling – that almost religious feeling – that arises when one listens to music. It’s like that higher place we sometimes reach when we hear fantastic and powerful melodies. Occasionally people use expressions after attending a concert where they compare the event to something mystical or that the vibrations of the music made it almost seem like “going to church.” Dancing on Tarab is dancing that draws its strength, its power, and its beauty from that euphoria. It is dancing that is soulful.

2 When did your interest in Middle Eastern dance begin and how did this ensemble come into being?

I’ve been a bellydancer my entire adult life and I became involved when I started taking classes as a break from my life as a print newspaper investigative reporter and an animal rights activist – two equally stressful pursuits. This ensemble is relatively new and it started three years ago when a group of Detroit’s longtime individual professional dancers decided to form a troupe. We wanted to see what collaboration would produce and since then we’ve become so incredibly close that being together in a studio seems like home to us. We all share the same work ethic in that we are very committed to elevating dance and pushing creative boundaries while staying true to the essence of bellydance – which is first and foremost Arabic dance.

3 Most westerners (especially Americans) understand or regard Middle Eastern dance as merely an exotic form of entertainment, but it actually has a rich cultural history. Isn’t it also an affirmation of certain feminist values?

I’m not a fan of the word “exotic” because it stereotypes ethnicities and tends to separate people from each other. Bellydance is definitely a form of feminism since it originated as a dance created by women for women. Today, of course, it’s for everyone – just as ballet, flamenco, modern dance, and jazz are for everyone. The only difference is we show our stomachs more because so much of the movement comes from the stomach.  I’m a little bit tickled when ballerinas  come to study with me and their first comment is usually, “I didn’t realize it was THIS difficult.” For some reason people think it’s going to be easy – and it’s not. And for the record, I love the ballet aspect that is sometimes incorporated in contemporary bellydance.

4 There are several unique approaches to Middle Eastern dance. What type will we see performed by you and your fellow performers on the 31st?

This show is going to please any and all die-hard fans of Raqs Sharki – which is what belly dance is called in Arab countries and translates simply as “folkloric dance.” There will be several different styles presented at this show to fantastic music.  Very skilled and well-studied dancers performing the real deal with nothing watered down. It will be energetic, earthy, beautiful, artistic, powerful, and friendly.

5 Devotees of the ballet speak of Pavlova, Fonteyn, Alonso, and others. What past or present names would you mention to someone who desires a better appreciation of this artistic expression?

Present-day dancers whom I currently love and admire include Molly Renshaw, Patsy Decline, Jenny Raquel, Dottie DeVonne, Lisa Montes, Laurie Leet, Pam Martin, Ziva Lynn, Mia Vagabond and Eliana Dedvukaj who are all performing. I’ve hand-chosen these dancers to perform this concept of a high-level, fun show at a local restaurant because of their extreme talent. Outside of Michigan, I am an avid and tremendous fan of Silvia Salamanca of Spain and Texas, Rachel Brice of Portland, Didem of Turkey, Dina Talaat of Egypt, and my all-time favorite dancer known as Lucy of Egypt.

6 The training for this type of dancing is intense, isn’t it? Describe a typical regimen for us.

The training is similar to that undertaken for other dance forms, but it takes years to become proficient. Most dancers, myself included, say it takes a lifetime. Like most professional dancers I began my dance life as a child with ballet and tap lessons. My studies in belly dance were classes 3 to 4 days a week plus traveling to weekend intensives to study with the best instructors in the world.

7 Middle Eastern dance in an Irish restaurant. What do you like most about belly and blarney?

Ha! This is the first time the troupe has performed at O’Mara’s However, Lisa Montes performs there almost on a monthly basis. She is a flamenco dancer first and is relatively new to belly dancing. She’ll be an interesting dancer to watch as her skills in flamenco are unmatched. What I love about this show is that once again art is art no matter what culture or venue. It’s a great big world, but art from anywhere in the world can bring humans together. That and a great meal shared together.

London | Portrait Of A Restaurant In Lockdown

Carry-Out | Things to Eat Safely At Home During Pandemic

Manic Quarantine Wish: I Want To Walk With You