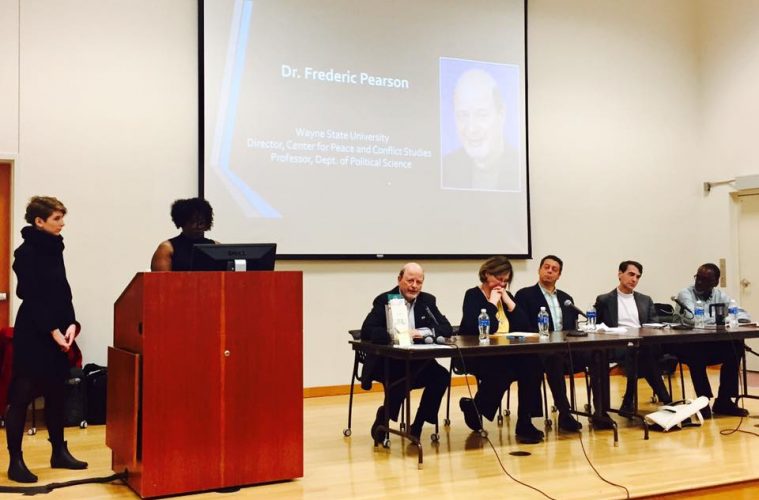 This past President’s Day, the Wayne State University Center for Peace and Conflict Studies and the Damon J. Keith Center for Civil Rights hosted an open panel entitled, Deconstructing “White Supremacy”? Nearly two weeks after racist graffiti appeared in the men’s bathroom on campus, panelists sought to unravel and discuss the roots of white supremacy and its prominence in current, political discussions.

The moderator for the event and Dispute Resolution Specialist with the Center for Peace and Conflict Studies, Barbara L. Jones, emphasized the necessity and difficulty of these open, community discussions centered around issues of race.

Each panelist was allocated ten minutes to deconstruct a different piece of white supremacy and the racialization of US politics. Dr. Pearson’s discussion focused on the divisive power of narratives throughout US history, Dr. Brown examined the institutional mechanism of citizenship and religious activism, Dr. Lupovitch dissected the racialization of Jewish identity in the US, Dr. Roth presented on John Locke’s Second Treatise of Government and its links to institutionalized oppression, while Dr. Gidlow explored the many faces of white supremacy beyond the white hood.

“Not everyone wants to talk about race and it makes a lot of people uncomfortable,” said Wayne State University Political Science undergraduate student Ifrah Mahmood. “There are a lot of white people in the government who don’t want to acknowledge that we’re not living in a ‘post-racial society’ even though many people want to paint it like that. We are not living in a ‘post-racial’ society. I hope we never do.”

“I think that it’s really important to talk about all of this in person,” said Wayne State University English and Peace and Conflict Studies undergraduate student Christiana Castillo. “Currently, people my age are going to the internet and having arguments over social media posts. When really, when you’re able to see each other, realize that we’re all human, and talk about issues in a mature, constructive way I think that we are far more likely to see positive change.”Forty-five community members, Wayne State students, faculty, and staff attended the event. Following a lively half an hour of questions and open discussion, Wayne State University Near Eastern Studies graduate student Rima Meroueh reflected on what brought her to the event from Northville with her son.

“After Trump was voted into office one of his first questions was: ‘Do I have to leave now?’” recalled Meroueh. “So, I think it’s so important for him to see that there are people who care and people who are working to change the way things are right now. It’s never too early to start being an activist.”

Wayne State University Adjuct Faculty member Richard Chakrin teaches Studies in Nonviolence with the Center for Peace and Conflict Studies and attended the event to support his friends, students, colleagues, and community.

“The way that we separate, demonize, and make ‘inferior’ and ‘superior’? I’d say we’ve been doing that ever since we stood up,” Chakrin mused. “It started as a survival technique to have this strong group identification. But now, it’s actually the threat. Unless you adapt and grow what seemed to save you in the past can actually destroy you in the future. We have to work together to cultivate love, not as affection, but as a radical commitment to unity.”

Moving forward, the Center for Peace and Conflict Studies hopes to cultivate a series of community discussions and dialogues between different communities in the Metro-Detroit region as a part of their “Beyond Fear and Hate” campaign.

“If anything has been shown by this campaign season that we’ve just had it’s that people are being played upon for their fears or are playing out their fears,” said Dr. Pearson. “It has been possible, somewhat, throughout some of our history to lessen some of this. But it takes a tremendous amount of focused effort – bringing people to each other’s neighborhoods, seeing each other as people, engaging in civil conversations – and I think that’s what we have to be after here.”