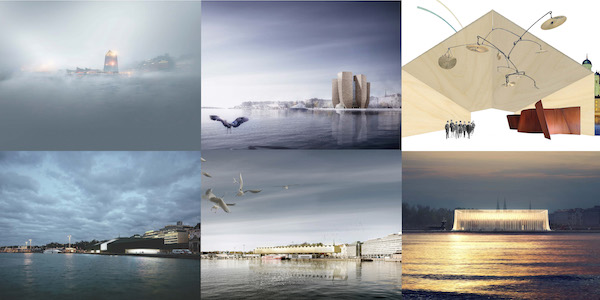 Bjorn Staadt – From April 25 to May 16, 2015, the Solomon R. Guggenheim Foundation will present the free, public exhibition Guggenheim Helsinki Now at the Kunsthalle Helsinki in Finland. Augmented by a series of talks, events, and performances designed to engage a range of age groups, the exhibition will reveal to the public for the first time the final designs submitted by the six finalist teams in the Guggenheim Helsinki Design Competition, as well as fifteen designs awarded honorable mentions by the jury.

Richard Armstrong, Director of the Solomon R. Guggenheim Museum and Foundation, stated, “Like the competition, this exhibition is meant to do more than show what architectural form a Guggenheim museum might take in Helsinki. It is an opportunity for a broad audience to consider a range of possible futures for a critical area of the Helsinki waterfront, with art and architecture at the heart of those scenarios. We invite the public to join us in imagining the museum of the future, discussing the issues that these designs have raised, and diving into the kind of thinking that the jury will be doing as it prepares to select the winning design.”

“Guggenheim Helsinki is not yet a physical place, but it is already providing a compelling medium for contemplating the present and future of architecture and the role of a twenty-first-century museum,” said Ari Wiseman, Deputy Director of the Solomon R. Guggenheim Foundation. “Through the exhibition and related community and education programs, we aim to offer a clear and compelling example of the multifaceted public engagement that is at the core of the Guggenheim’s mission and that we hope to develop and advance in new ways in Helsinki.”

Guggenheim Helsinki Now presents a snapshot of the competition at this key milestone in its timeline, chronicling its history and projecting its potential outcomes. By drawing on the historic global response to the competition, the exhibition also will provide insights into the state of architecture today. In addition to spotlighting the final proposals of the six shortlisted architecture firms and the fifteen honorable mentions, the exhibition will present collaborative works by Finnish and American designers and technologists who have used digital methods to analyze and interpret the robust archive of submissions as a platform for stimulating discussion and collecting public feedback.

“The Guggenheim Helsinki Design Competition is a catalyst to think differently,” said Therrien. “The six finalists were selected for demonstrating their ability to do so by a jury that operated in the same spirit. The exhibition is designed to carry this mantle forward, going beyond the role of simply presenting to creating an active form of engagement and interface with the citizens of Helsinki.”

Jan Förster, Director, Kunsthalle Helsinki, stated, “Kunsthalle Helsinki has always strived to be topical and to ignite public discussion. The Kunsthalle has not hosted an exhibition on architecture for a while now, so it is great that the Guggenheim Foundation has chosen it to be the venue for showcasing the results of an international design competition.”