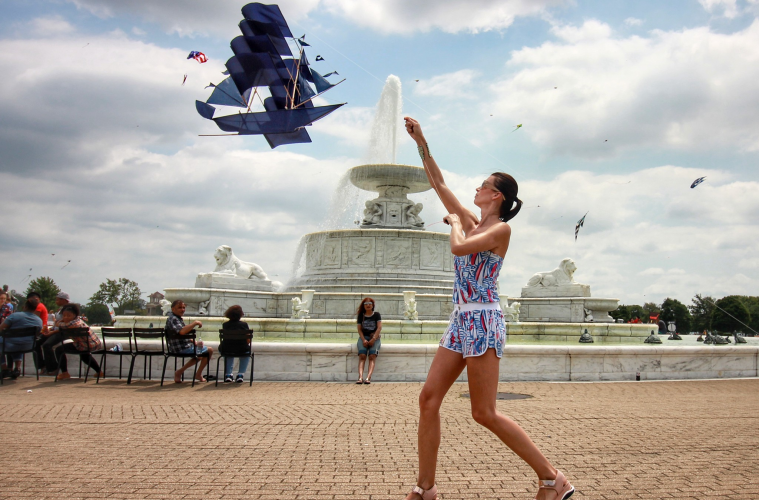 In late March I sat down with two of the organizers of Detroit’s own, come fly a kite day, coined the Detroit Kite Festival. Full disclosure: all three of us are kite fans. Arthur Bledsoe and Katie Hearn are two of the organizers part of a larger notably dedicated volunteer team, along with their steamrolling founder Margo Dalal. Now in their third year, this small nonprofit aims to bring us, the entire Detroit community, together yet again— perhaps sparking joy, for one big communal gathering this summer! 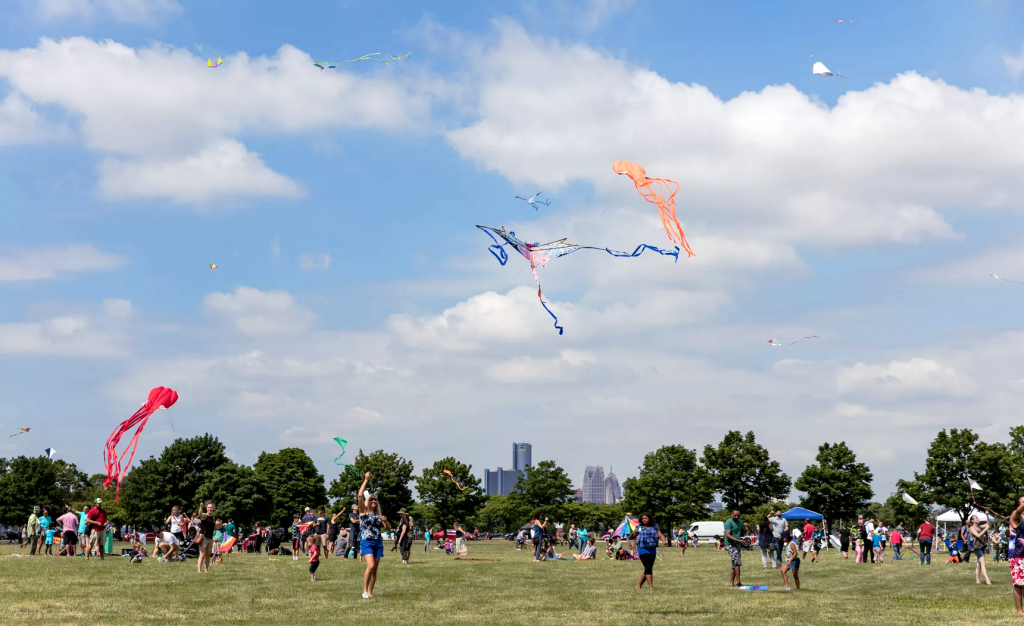 A spiritual feat of a little triangle in the sky, this was the first thing Katie shared. In the background I imagined some uplifting Phillip Glass quartet floating in her memory. I thought of younger Katie when she was exploring kites for the first time. Déjà vu kite moment Katie— hoarding her favorite colorful ones in the trunk of her car, year after year, in chance of strong winds. Tactile memories of kites from car, to field, then sky.

Like many of us, younger Katie was given the responsibility of something fluid and fragile, yet resilient. She was old enough to watch out for the power lines! And not let it slip away.

For her, it has always been worth it, worth untangling 500 feet of line for hours— all for that “release the weight of the world” moment. For her “putting your head in the clouds” can be grounding. It can be an experience that helps with anxiety. And just perhaps let us feel an innate sense of oneness.

“They’re beautiful, you don’t have to do anything but just let them up, and let them fly” – Arthur Bledsoe

After pouring over some Detroit history of kites, plus a whole bunch of kite interludes in films, literature, and stories friends have shared, I recognize wholly that flying a kite has never been just for kids. Perhaps forgotten, perhaps seen as frivolous, often marketed toward kids— the act of flying a kite, no matter the shape or size or skill is something accessible and universal. And as an adult I admittedly have taken it for granted.

It can bring us together, sometimes for purpose too.

In the early 1970’s there were a series of Kite-In protests, staged in parks and beaches around Detroit. And in 1973 the WABX Kite Fly was one that took place exactly where the Detroit Kite Festival is today on Belle Isle.  Recently I had a friend refer to those protests as a ‘bunch of hippies smoking pot in a park against the [Vietnam] War’ but his assessment leaves out nearly all the magic and innocence of our collective actions, past and present.

Whatever the purpose of gathering in the park, these were just some people exploring the innate human experience– same families, individuals who have gathered and grounded themselves as today. The same timeless people who have uplifted their child-bright souls up into the clouds. Kids and adults with bikes, mopeds, motorcycles, and bare feet just being human.

This is what the Detroit Kite Festival is all about. Freedom of self, and bother, and pressure. Unified visions in the clouds, on a sunny summer day in the park.

Pitching in with money and time to help this group of bright volunteers bring it to life again. This month the DKF team is aiming to raise $3,000 to pay just some of the fees, materials and costs associated with putting on a festival. For context their first year, with help from the Michigan Economic Development Corporation, they crowdfunded over $11,000.

And it is likely that we will have to donate again next year too. Grassroots style. No fences. Fewer rules.

The Detroit Institute of Arts is back again because they believe in it. I believe in it. Arthur, Katie, Margo and a whole team of doers are all in— three years running. Feel that little push to make something beautiful happen on Belle Isle? Follow this link to support them. Or check out their website.

The festival is set for July 14, 2019 on Belle Isle, next to the James Scott Memorial Fountain, from 10AM – 5PM, and remains free and open to all.