On Thanksgiving Day our Detroit Lions football team is part of a long-standing tradition. Tryptophan highs (the substance in turkey meat that makes one sleepy) coupled with a few beers, brings fans to the couches and television screens, all to watch our annual holiday game. This year it is on Thursday, November 26, 2015, 12:30 pm, and the combatants are the Detroit Lions versus the Philadelphia Eagles.

According to Wikipedia, the concept of American football games being played on Thanksgiving Day dates back to 1876, shortly after the game had been invented, as it was a day that most people had off work. The first owner of the Detroit Lions, G.A. Richards, reportedly, started the tradition of the Thanksgiving Day game as a publicity ploy to get people to go to his team’s games. In 1934, Mr. Richards decided to draw local and national recognition to the Lions so he scheduled one of the team’s most important games for the holiday. The first holiday game was with the Chicago Bears. The Lions lost the game.

Play was interrupted for six seasons during World War II. The first professional football player to appear on the cover of Time Magazine was the Detroit Lions’ quarterback Bobby Layne on November 29, 1954. According to Time, “Of all the pro teams, the best (for the last three seasons) is the Detroit Lions. And the best quarterback in the world is Robert Lawrence Layne, a blonde bandy-legged Texan with a prairie squint in his narrow blue eyes, and an unathletic paunch puffing out of his ample frame (6 ft-1 in. , 195 lbs.).” Ah, those were the days!

According to the National Football League (NFL), “Male turkeys are called ‘Toms’ and since 1950, quarterbacks named Tom are Tom Brady, Tom Flores, and Tommy Kramer.” Another NFL factoid noted “The heaviest turkey is 86 pounds, and, the heaviest NFL player ever is Aaron Gibson (DET, DAL, CHI) at 410 pounds which equals 4.76 heavy turkeys.” 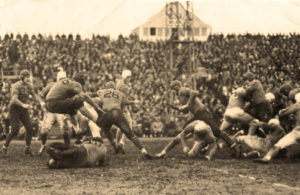 According to Wikipedia, some of the more memorable Thanksgiving Day football games were:

1962: The Lions handed the 10-0 Green Bay Packers their lone defeat of the season.

1980: Detroit and Chicago went to overtime tied 17-17, the first Thanksgiving Day game to do so (overtime was not added to the NFL regular season until 1974) and the first overtime game at the Pontiac Silverdome. Bears running back Dave Williams returned the opening kickoff in overtime 95 yards for a game-winning touchdown, ending the shortest overtime period in NFL history at the time. Regarding the wearing of vintage uniforms often worn at the holiday games, in 2001-2004, and again in 2008 and 2010, the Detroit Lions have worn “throwback” uniforms based on their very early years.

The other great Detroit tradition on this holiday is the annual Detroit Thanksgiving Parade. This year the parade will be on November 26, 2015. It is produced by The Parade Company.

At press-time, news broke that the Pontiac Silverdome will be demolished in 2016 to make way for new development. Your writer has many memories about the Silverdome. Years before it was constructed, the site used to be an old “Lover’s Lane” and off-the-road/motorcycle trail. One could say, that before touchdowns, many lovers “scored” at the old, hilly site.

My father, Bernard Neussendorfer, was a union fire protection journeyman who managed the installation of fire suppression sprinkler system at the sports facility. Also, I had the honor to escort the late Oakland Press Society Editor Sybil Little to the Pontiac Silverdome, where she sang in the choir at the Mass in 1987, officiated by then Pope John Paul II (now Saint John Paul II). The Pontiac Silverdome was constructed by The Barton Malow Company, General Contractors/Construction Managers.

Author Joe Neussendorfer is an Affiliate Member of the American Society of Civil Engineers (ASCE), the Engineering Society of Detroit (ESD), and the Construction History Society of America. He has been writing about Michigan’s engineering architecture and construction history the past 40 years. His email is: joseph,[email protected]