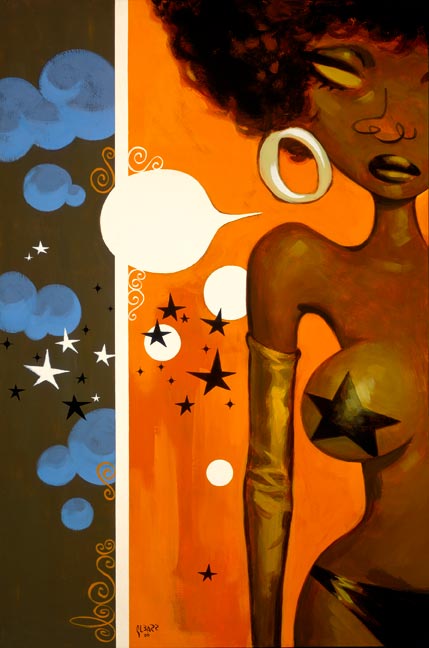 “Sure, size matters, but fun matters a lot more”, Dirty Show® curator and founder, Jerry Vile explains. “It was never our goal to be the biggest erotic – the most art, the most people in attendance – all we want is to put on a fun, dynamic show. Obviously from our name, we don’t take ourselves too seriously; too much pretension can spoil art.” Last year, over 10,000 people passed through the doors, with over 12,000 expected this time around. “The crowd for Dirty has grown organically, word-of-mouth, because people will always find something at the show they feel compelled to share with friends.”

Whether that might be anatomically correct entranceways, midget burlesque performers, or any number of other sex-art installations, the exhibition is growing. Organizers keep finding bigger locations and adding additional days. Last year’s exhibition at Bert’s, a massive warehouse (15,000 sq ft) venue in Eastern Market, reached capacity before 11pm on three of the four nights it was held. This year they have kept the same venue and added a fifth night of debauchery.

The crowd is diverse, young and old, a melting pot of nationalities, mainstream and freak show. It is liberally peppered with those dressed in full fetish regalia, such as head to toe latex body suits, leather bondage gear or towering transvestites in trashy lingerie.  It would seem many of the women forgo the lingerie boutique for the hardware store, as electrical tape seems to be all the rage.

The Dirty Show is an explosion of atmosphere, every surface plastered with art, depicting every act one imagines, and some others may wish to forget. There are dancers on stripper poles and in cages, go-go boys and girls grinding to an atmospheric soundtrack. It is an art exhibition on an almost cinematic scale, Felliniesque in nature, with the sensibility of David Lynch, and the grotesque humour of John Waters. Not that everything is weird or sexual; the majority of patrons appear to be just fun loving everyday people – friends, neighbors, even journalists. But, Dirty is also a magnet for every eccentric in the metro area. No one is judging anybody, but this is some of the best people watching anywhere.

Dirty is a juried show, culled from thousands of entries worldwide, and has always proven to be extremely interesting. The 300 piece plus exhibit features about every erotic idea that can be photographed, painted, sculpted or conceptualized, which can be overwhelming at first, but don’t worry, you’ll settle in. Get a drink, catch an odd stage performance – a mix of burlesque and vaudeville – or experience the up close and personal entertainment of the psycho puppet show, or the gorilla girl. Featured last year, with small sculpture and paintings, were Oscar winner (Alien), Swiss surrealist HR Giger, world renowned Detroit painters Glenn Barr and Niagara – both of whom have appeared on the cover of Juxtapoz – photographers Eric Kroll and Steve Diet, and photography from horror writer Clive Barker.

Though, much of The Dirty Show can be shocking for some, a good deal is genuinely artistic and, at times, quite beautiful. Curator Vile expounds, “If you are coming for titillation, this is not the place. It is an art exhibition. At the same time, if you’re easily offended this is not the place either, we do not censor and not everything will be pretty. Dirty is how the artists interpret, that somewhat forbidden theme, that most interests us. It is their technique and style, with, hopefully, some insight into the artist or the viewer.” Obviously, The Dirty Show is not for everyone but it is a contemporary take on a theme that dates back to the beginning of art itself. “There are works hanging in museums that were considered pornographic in their time,” continues Vile. “I can see how people would feel that way about some of our art, which is why we don’t permit minors. Our name alone should be enough to prepare anyone who may be offended.”

That said, The Dirty Show is one of a very few exhibitions, including The Detroit Auto Show, live sporting events and The Detroit Electronic Music Festival, that actually draw tourism to the Motor City, and it has become a popular Valentine’s destination for adventuresome singles, curious couples and lovers of art alike. So, if you’re feeling frisky this February, with just a touch of cabin fever, why not grab your significant other – and, perhaps, a rider’s crop – and head on down to Detroit’s own Dirty Show