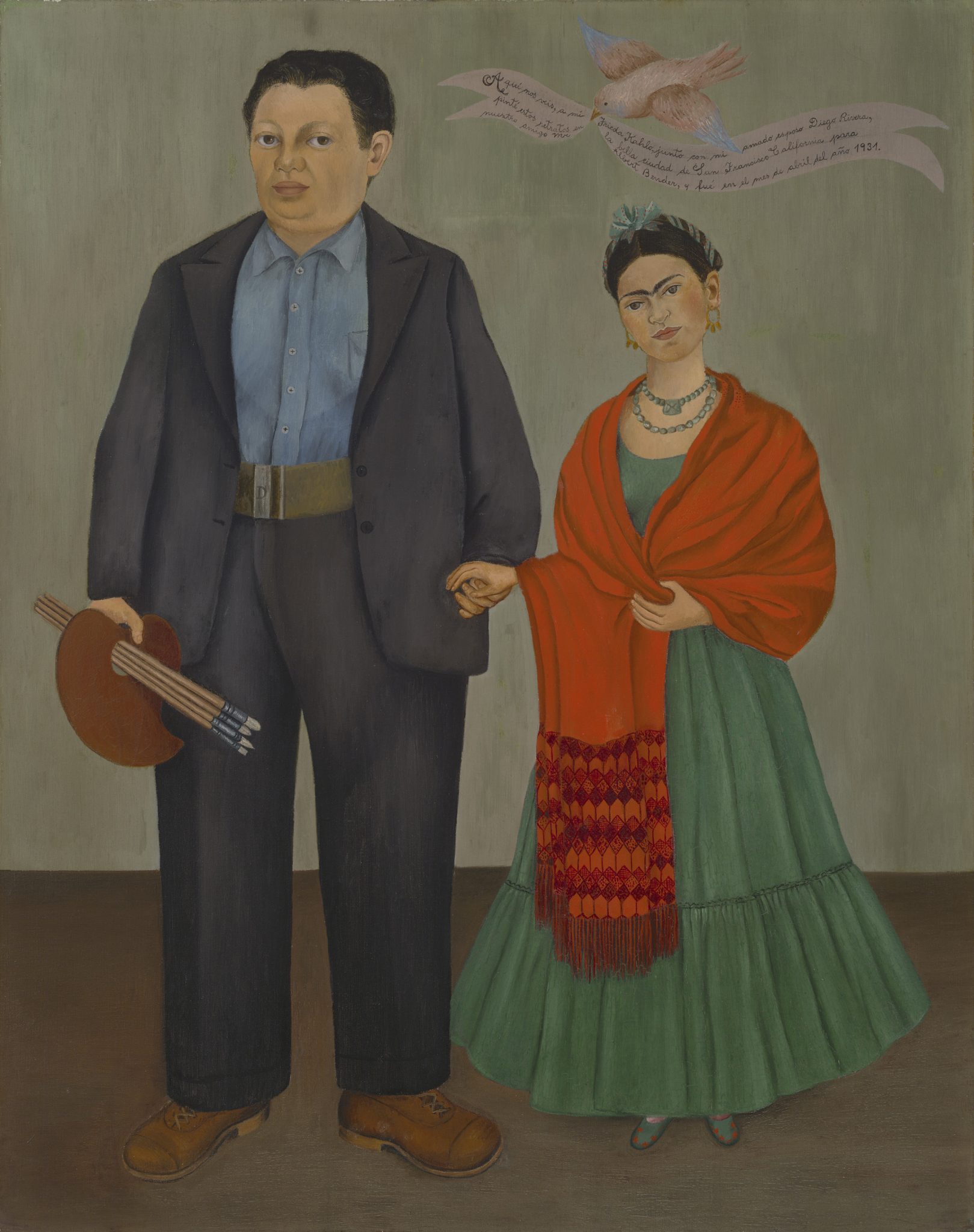 Between April 1932 and March 1933, Diego Rivera created one of his most accomplished murals, ”Detroit Industry” on the walls of what was then a garden courtyard at the recently opened new museum building. At the same time the largely unnoticed, Frida Kahlo developed her now-celebrated artistic identity.

Before coming to Detroit, Rivera’s and Kahlo’s art centered on Mexican politics, society and identity. Rivera focused on farmers, laborers and indigenous peoples, whom he aimed to bring to the center of Mexico’s history and national identity. Kahlo referenced folk art motifs, believing that indigenous and folk culture was an authentic expression of Mexico’s heritage.

While in Detroit, Rivera worked primarily on the 27-panel Detroit Industry frescos, which depict the complex interplay of natural resources, manufacturing processes and workers at the Ford Motor Company River Rouge plant. Rivera, who already had an interest in industrial design, spent months sketching at the Ford plant and was fascinated by the then state-of-the art factory. He conceived of the murals as promoting the understanding of the working class and American engineering genius.

The artist incorporated elements of ancient Mexican cultural beliefs and their relationship to the modern world throughout the murals to illustrate his concept of the interconnectedness of the earth’s resources and modern technology. He modeled the image of a stamping plant after the Aztec creator deity Coatlicue, for example.

For Kahlo, Detroit was a time of deep emotional turmoil, as well as growth as an artist. Shortly after arriving, she suffered a devastating event: the loss of her pregnancy. That experience is the subject of one of her most affecting paintings, Henry Ford Hospital, in which she expresses her physical and emotional pain in the aftermath of that event. The foreground shows Kahlo lying in her hospital bed, with deeply personal surreal images floating around her.

Kahlo continued to define herself mostly through self-portraits that reflected her feelings about her time in Detroit. She was unhappy and wanted to return to her Mexican roots. Self-portrait on the Borderline between Mexico and the United States shows Kahlo standing in the middle, with references to Mexico’s ancient traditions on her left and symbols of U.S. industry on the right. While there are similarities to Detroit Industry, Rivera’s overriding theme is the synthesis of the Americas, Kahlo portrays them as two separate realms—clearly favoring Mexico.

When the artists returned home, Rivera continued to paint murals and resumed his interest in portraying everyday people and indigenous Mexican heritage. Good examples are his paintings Man Loading Donkey with Firewood and Zandunga, Tehuantepec Dance. Kahlo painted self-portraits using iconography she developed in Detroit. Self-portrait with Cropped Hair, a commentary on gender, and Self-portrait with Monkey, where the monkey is thought to be a surrogate for the child she never had, are two such paintings. When Kahlo painted other women, she often showed them as weak or suffering, such as Suicide of Dorothy Hale and A Few Small Nips, which shows a woman who had just been stabbed to death by her husband.

Diego Rivera and Frida Kahlo in Detroit is the first exhibition to focus on their time in Detroit, a period during which each artist made significant career breakthroughs.

“Rivera considered Detroit Industry, recently designated a national historical landmark, as his finest mural cycle,” said Graham W. J. Beal, DIA director. “It shows the artist at the height of his powers. For Frida Kahlo, on the other hand, the works she produced can be seen as the beginning of her development as a mature artist with her own distinct, and distinctive, style.”

Included in the 38 works by Rivera, which have not been seen in 30 years, are his epic preparatory drawings for Detroit Industry. Among the 26 works by Kahlo are many of those she created in Detroit, which reveal the emergence of her deeply personal artistic style.