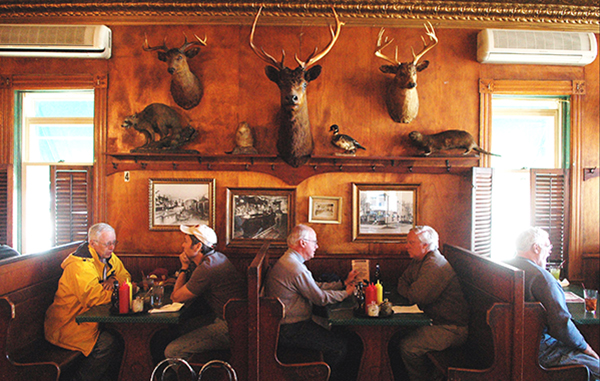 Sleder’s Family Tavern has been popular for a long time — so long, in fact, that it’s the oldest continually operated restaurant/saloon in Michigan. Built in 1882 by Bohemian wheelwright Vencil Sleder, it’s been pretty much in continuous operation ever since. (Thanks to some creative labeling, it even survived Prohibition without much difficulty.) It’s full of local atmosphere – hardwood floors, tin ceilings, a massive 21-foot mahogany bar and lots of stuffed animal heads.

Just a few blocks away is another historic Slabtown hangout: the Little Bohemia, known to generations of locals simply as “Lil Bo’s.” Opened in 1932 as a hot dog stand (and secret speakeasy) it’s another of the rare local eateries that still preserves the feel of an earlier Traverse City. In addition to a good selection of pub grub — including a truly excellent olive burger – this place also serves such traditional fare as slow-roasted Bohemian pork with dumplings, apple gravy and sauerkraut.

A third tavern/hangout is Brady’s on Union Street in the city’s Old Town district – a fiercely local bar whose kitchen is known for its broasted chicken dinners and Thursday night “bluegill special.”