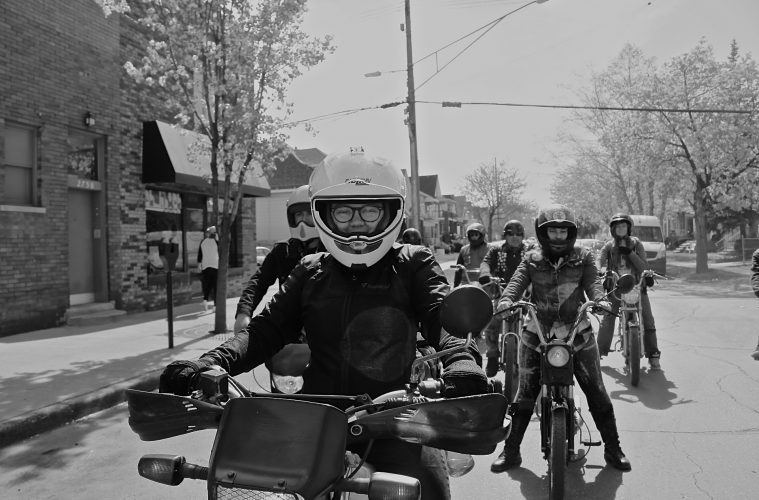 The spread looked like breakfast at David Lynch’s house: Cucumber slices, a bowl with neatly peeled hard-boiled eggs, peanut butter finger sandwiches, black coffee, seeded red grapes that sat plump and sad upon their own ceramic plate, and a huge pitcher of pickle infused vodka. Modern day Greaser’s milled about in the kitchen of  gang girl, Francis Spade’s Hamtramck apartment clad in denim, motorcycle leathers, striped leggings, and patriarchy kicking leather boots. We lined up around the small breakfast table to down a shot of the salty vodka. It was 10:30 am on Earth Day and the Femme Pedals Moped Club spring ride was about to kick off.

A moped is like a motorbike with bicycle pedals that are used to engage the engine. These little beasts usually don’t exceed 50 CCs and running stock the things need a stiff tail wind and a prayer to get much over thirty. But I wasn’t with the kind of crew that was content with running their whips bone stock. I had acquired a moped for the day from the kind people at Detroit Moped Works on Michigan Ave. It was a common model made in the 70s by the Austrian company Puch. A pale gold color, it was plenty of fun for the insurance adjuster or the tgif crowd, but all around me were machines that were bobbed like motorcycle choppers in a riot of candy colored pin striping, burnished racing whites and flat blacks. A wide grinned dude in denim topped off his ride with some two stroke gas as a lit cigarette dangled precariously off his bottom lip. The aesthetic came off as much hell-for-leather as merry prankster.

All kinds of people ride mopeds, but today was all about the ladies. The stereotype of the gear head tends male, but apparently no one told this group. The dudes were represented to be sure, but Francis was the leader of today’s ride and as we tore down the tight Hamtramck streets the dudes did all they could to keep up. 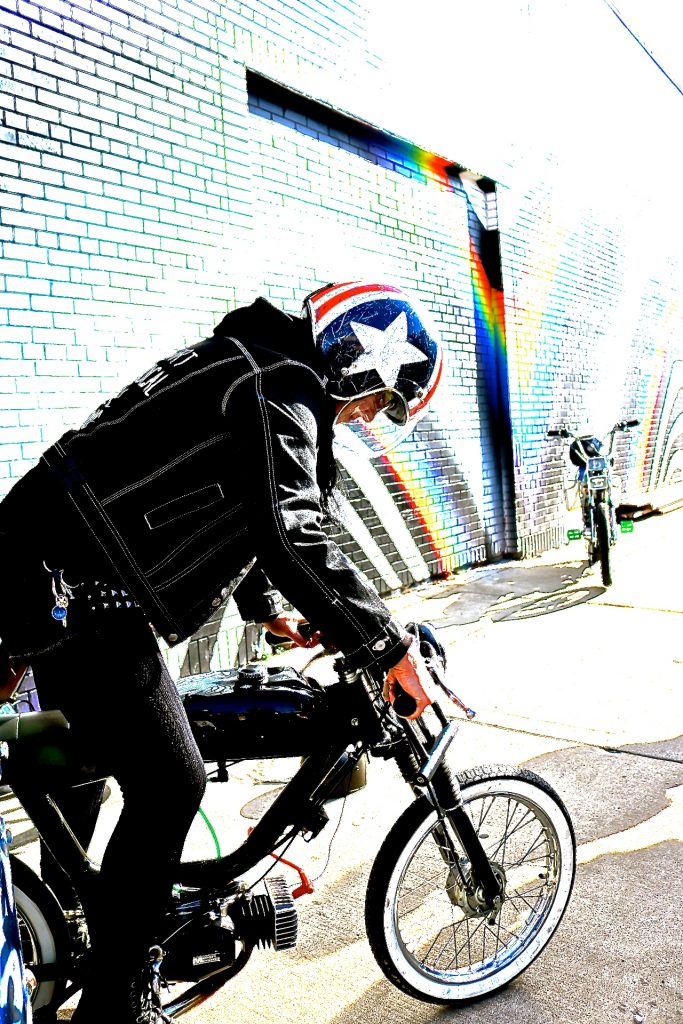 Later, over cans of Stroh’s, cheap whiskey and pizza at the Hamtramck bar Whiskey in the Jar, a woman in a leather jacket, denim shorts and fishnets named Autumn explained these rides were more than simply a chance to get out on a nice day. For the women it was a safe place to ride, learn and build relationships. It was a chance for people who identify as female to get together without having to answer to anybody else’s expectations.

Zipping around Belle Isle we stopped for a photo-op at the James Scott Memorial Fountain. A flask the size of my head appeared and more pickle vodka made the rounds. Riding off the island we stopped at a near by gas station to top off. Even here, during the most practical of stops, it seemed like a party. Everyone was cracking jokes, jostling each other and a small crowd gathered. Some guy walking by took out his cell phone and began snapping pictures muttering little asides like, “Oh, yeah!” And, “Niiice.” At times it was difficult to tell whether the man was checking out the bikes or the riders. The crew held court; more than happy to tell the admirers all about their Puch and Garelli rides, modified well beyond the manufacturer’s recommendations.

But, in the Detroit of present we don’t have much use for the stodgy recommendations of the past. Milling about the ever changing installation art space known as the Heidelberg Project, the riders planted their bikes in the grass between the kaleidoscopically painted piles of tires, supernaturally shipwrecked old boats and other flotsam of yesteryear. 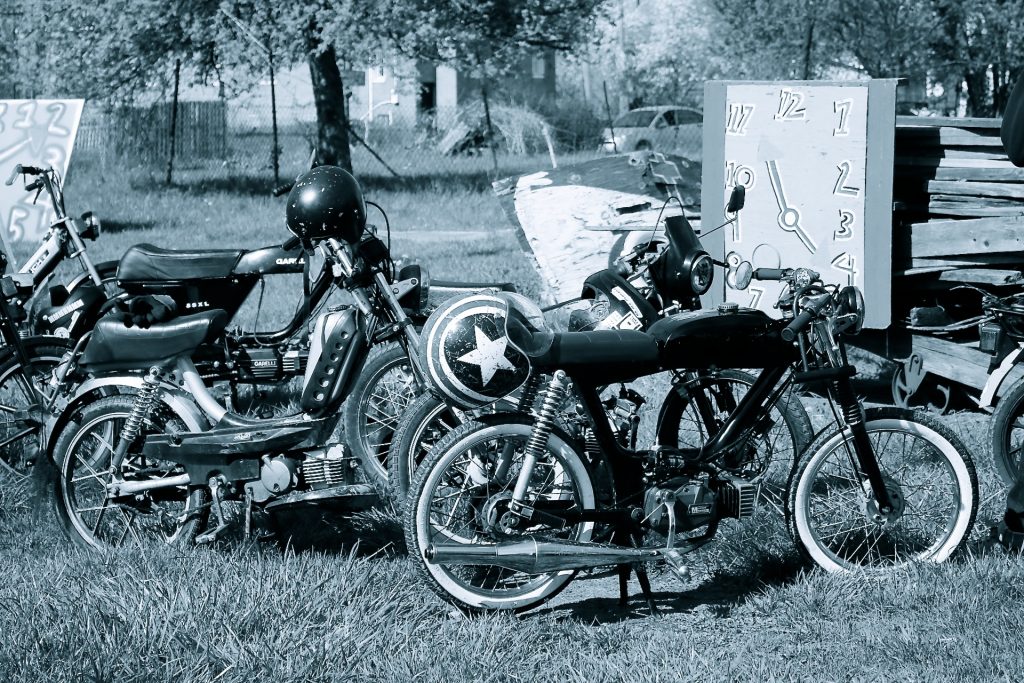 The bikes were kickstanded upright pell-mell in the art park. The lack of organization was pleasing in its anarchy and seemed to take on a significance I couldn’t quite touch as the smell of marijuana wafted gently over the small field. It was almost a surprise when Joe Cowabunga, a puckish veteran with short light hair, told me his slick, top tanked Puch with the white saddlebags could probably hit sixty-five if you opened her up. For a moment I nearly forgot these things could move. They just felt so ensconced, like they had always been there. That temporary illusion shattered as I kicked my ride to life and a smile spread over my face.

In the past I had seen these wild gangs of hip moped-ers fly around town, scarves trailing in the wind, a bit like foppish two wheeled pirates, and find the whole thing a little irksome while I sucked wind pedaling my ass off  on my bike half speed across town. But, now trailing this group of buccaneers on their modded machines, I think I got it. Dodging potholes, as Sam roared past me on her teal Motomarina Sebring and watching the group draw looks, I could practically hear the longing and jealousy as pedestrians wished they could be one of these mutineering women. We were having so much fun it felt illegal, like the opening salvo of revolution. 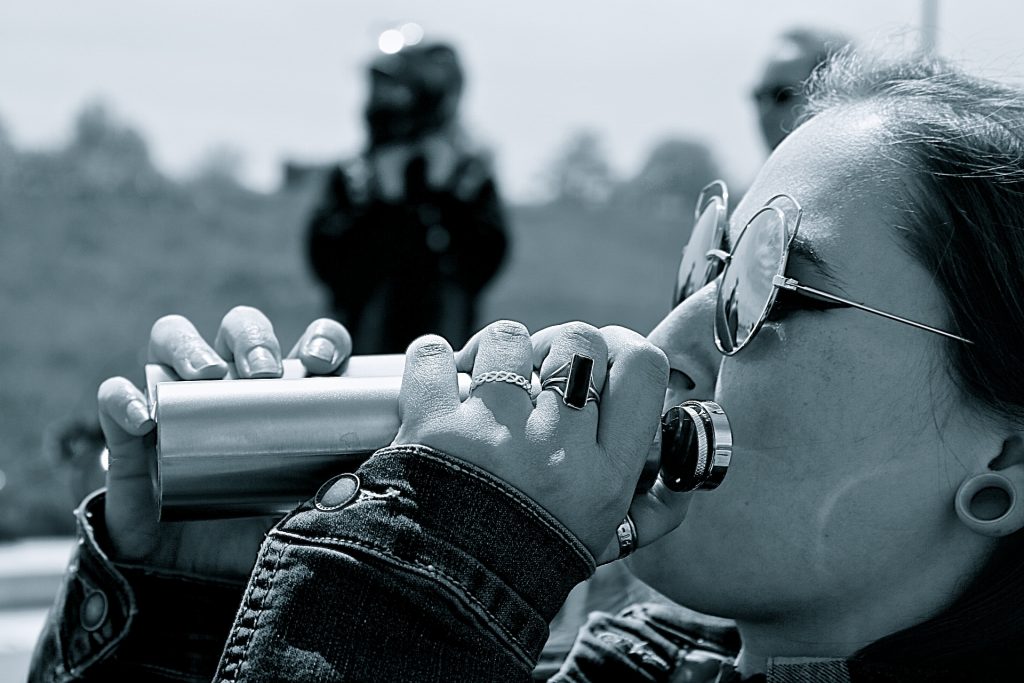 Now, early in the day I was still getting used to riding as Francis led the crew down Conant and onto Mt. Elliot. We made a left onto Grand Boulevard. Passing by the shell of the Packard Plant, under the radiance of the mid April sun and past, what I consider to be, the sketchiest motel in the city, I was surrounded by the sounds of these low displacement engines. To the outside observer the things sound a little like lawn mowers, but in the thick of the group ride, straddling this Italian interpretation of freedom and watching the women bank hard in the shadow of this abandoned manufacturer of American exceptionalism, the sound was joyous.

The Girl Gang stood for inclusion and identity. And, just like this magnificent city, the gritty denouement of its engines was subterfuge for the real ruckus being kicked up; the racket of expectation being upended. 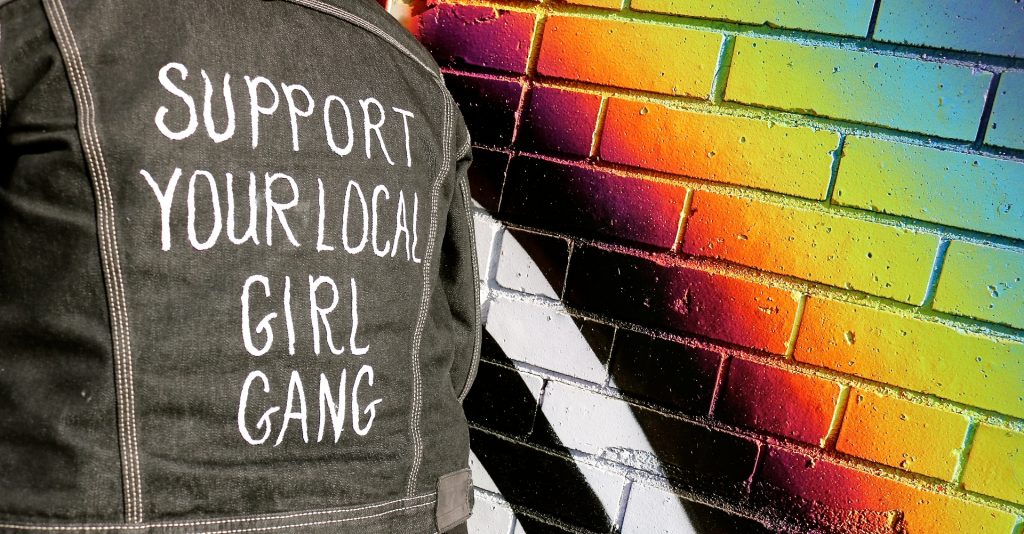