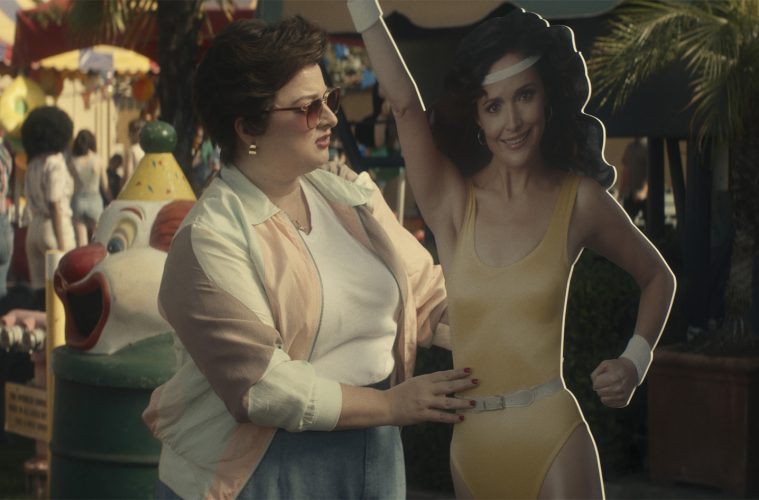 Anthony Brancaleone: Well, hello Diedre. I have seen S1 of Physical and I’m watching S2 now. Love it. Seriously. The show is more complex and layered than I had anticipated. And, with characters an audience can invest in. It’s a lot of fun. Congratulations to all involved…

Created and produced by Annie Weisman, with a team of Executive Producers to support the vision – episodes directed by Craig Gillespie, Stephen Laing, and Liza Johnson – Physical is a comedy (albeit, slightly dark) that follows the lives of coupled women and men during California’s transition from the sex and drugs byproduct of the 1970s Women’s Liberation Movement into the realms of education, empowerment, and equal opportunity – manifest here, via politics, relationships, and the emerging world of aerobics.

AB: Are you drinking coffee this morning?

AB: Have you had Breakfast?

DF: Not yet, but I might have a munch and crunch on the tale end of the call…

AB: I’m having coffee in a small sun porch – in case you’re wondering – watching bunnies and bees enjoy the sun.

AB: I share the space with our cat’s litter box. Don’t want to present too grand an image.

AB: Where are you and what is your view, lately?

DF: Back and forth to LA and New York at the moment. My boyfriend had Covid and I’m helping him out. Vaccines help. I’m just thankful we were vaccinated or it might have been worse. 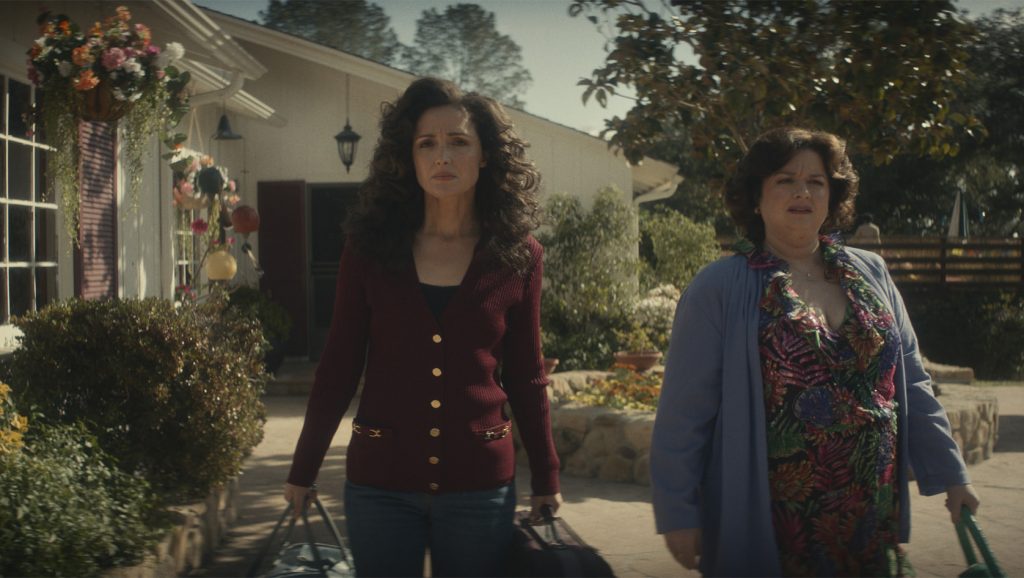 Left: Rose Byrne as Sheila Rubin with her bestie, Greta, played by Diedre Friel in “Physical”.

“That is the Craziest question I’ve ever been asked!”

AB: Let’s discuss Physical. On the surface the show seems to be a lovely combination of the Olivia Newton John song, Physical, and the 1980s movie, “Perfect” , starring Jaime Lee Curtis. What are some of the other inspirations from cast and crew for this series?

DF: We have a really brilliant costume designer, Ernesto Martinez and he really knows the era. He’s pulling a lot from the 70s. The music comes from our brilliant producers. My character Greta is like a mom, so she’s not up on current music. So, I use playlists with a little more 70s music to inspire me for her character. And, I also pull from my mother.

AB: The set, music, and wardrobe departments do a great job pulling from the years previous to the time period of the show. It’s the blend of 60s, 70s, and 80s that really give the show an authentic look.

AB: Do you own any of Olivia’s albums? Maybe, something on vinyl?

DF: I don’t own Olivia on vinyl but she’s on my Spotify. I should though. I Love vinyl records. Something about that time period, listening from beginning to end. Bands would construct an album to take you on a full journey. And, the warmth of vinyl, I love. Obviously, I listen to digital but with digital it’s more about a collection of songs.

AB: What music from the “Physical” era are you listening to now? Any suggestions for our playlists? Maybe, you or your character, Greta have a playlist on Spotify to share?

DF: Tyler Labeen is a friend who has curated playlists every week for me. Apple, Spotify, I have playlists but haven’t done that yet. That’s a good idea. I should do a playlist that Greta would listen to. 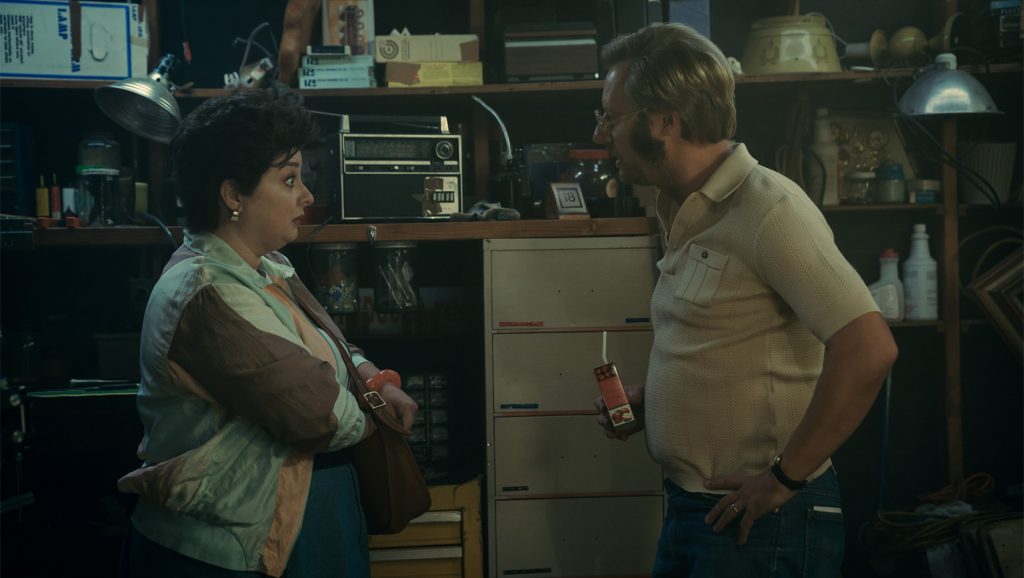 AB: Recently, I overheard a young woman at market say that in real life Rose Byrne is a “Klepto”…

AB: Anything missing from your trailer?

DF: That is the Craziest question I’ve ever been asked…

AB: It was a lead up reference to her character; Sheila has been known to lift things from friends and associates – Greta’s camcorder, for one.

DF: (laughing) No, she’s wonderful and we have an incredibly positive climate on set. Rose is a brilliant actress and a real leader. I can’t say enough things about Rose Byrne – she’s wonderful. 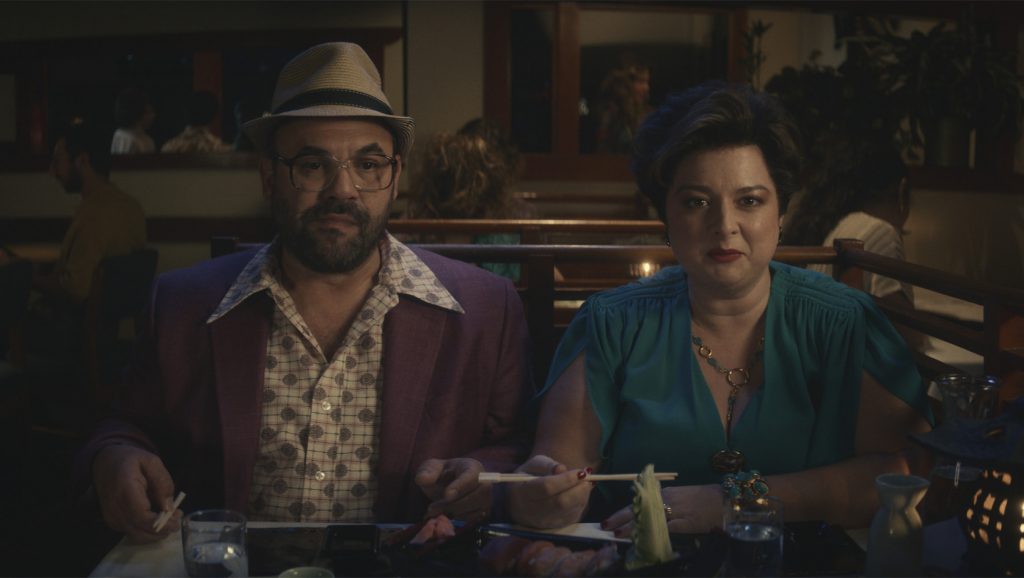 AB: In the show there are issues with both of your characters regarding marriage, body imaging, and eating disorders. Today, we seem to still have those issues. While we’ve probably bettered one with the evolution of divorce have the others taken a turn for the better? I’m not sure. We frown upon body shaming, but shouldn’t we also give attention to “healthy living”?

DF: I think you’re very spot on with your observation. We are having the same conversations over and over. Are we really making progress on these conversations? I’ve learned now that anything you do prescribing a message can be very tricky. I feel very proud of my body and self acceptance is important. Being healthy is important. My cholesterol, etc. It’s complicated. I don’t think it’s one thing or the other. I am also an actor, not a doctor, so I don’t know if it’s for me to say …

AB: That’s fair. Your character Greta, and her husband, Ernie are also into sexual exploration. But I get the sense that the acts have to this point been more of his fantasies – what do you think Greta fantasizes about?

DF: I don’t know if Greta knows. She does take a stab at it in episode 3 and 4 but when it occurs to her she isn’t quite sure. There is an expectation to be a happy wife and mother but all of sudden she meets Sheila, and she opens up to what is possible. In episode 6, she does take a step and goes after it with Sheila but it fails – but good for her for trying. I don’t know if she knows what she wants. She is opening her eyes to many things – business, kids, marriage.

AB: Due to “Physical” you must be recognized everywhere you go lately?

AB: What is the best way for fans to get an autograph and, perhaps, a “Selfie”?

DF: As long as I’m not coming from the gym I’m fine (laughing).

AB: If you recognize a 3% increase in Selfie asks you’ll know who to blame.

AB: As an actor I’m curious to hear your thoughts on the state of Comedy – be it film, stand up, series – and its relationship to free speech?

DF: I don’t know. I don’t know. For me, as far as comedy and free speech, somebody is giving me text 99% of the time. So, I’m not dealing with that issue like a Stand Up would. But, I think there needs to be a balance between humor and consciously trying to hurt somebody.

AB: Can comedy help us feel better about ourselves? Or, is it about feeling better? Maybe, it’s about finding truth, or is it just about having a good time?

DF: All of this can happen. Good comedy can make you reflect on yourself. Jerry Seinfeld was observational. He could make you consider bathroom stalls, which cracked me up. It can be there for many reasons. Any good art can do both, right?

AB: I think you’re right. By the way, what can you tell me about Ray Romano? I understand you star in his directorial debut. Have you seen the film? Been to any festivals with Ray? How was his first shot at directing?

DF: He wrote and directed Somewhere in Queens, which premiered this year at Tribeca Film Festival. Ray is brilliant. The script is a wonderful blend of comedy and heartfelt emotions. Ray was so good to work with. Humble and warm. He sets an equal tone on set, as if we’ve all been working together for years. At one point I said, “I hope you do this all the time”.

AB: Is Ray a Klepto?

After the success of the first two seasons of “Physical” on Apple TV+ the platform has decided to move forward with Season 3. Until then, we recommend a combination of aerobic activity and late night binging.