I’m not entirely sure how my fascination with little snow-covered ceramic houses began, but I do know it was in 2017. I think I was perusing YouTube for Christmastime commercials from the Eighties, which is still a deeply sentimental holiday tradition for me, when I came across my first Christmas village display. These were epically huge layouts that were more metropolis than village, painstakingly arranged with such a zeal that it intoxicated me with its ridiculous grandeur.

After around a week of bingeing every video I could find, I decided to take the plunge and start my own. Quickly realizing how prohibitive the costs of these homes actually were I descended down an eBay rabbit hole, determined to get in on this fascinating world of miniature joy. I decided to keep it simple and collect a few of the houses from “A Christmas Carol” which were a part of Dept 56’s Dickens Village Series. Seeing that we lived in a small apartment in Chicago at the time, I assured my wife that this was the beginning and the end of my collection. I was very wrong.

Like so many things that I become infatuated with, I started learning all I could about my newfound hobby. I was originally under the impression that this was a relatively new phenomenon, but was surprised to learn that villages started as early as the 1300’s and grew out from Nativity sets, until they had nothing to do with baby Jesus at all. By the late 18th century, our idea of a modern village had become a normal tradition in Germany which, like so many of our modern yuletide practices, made its way to us. Interestingly, the villages were called a putz, from the German word “putzen”, which meant to decorate. I felt connected to this, seeing that I definitely enjoy putzing around. 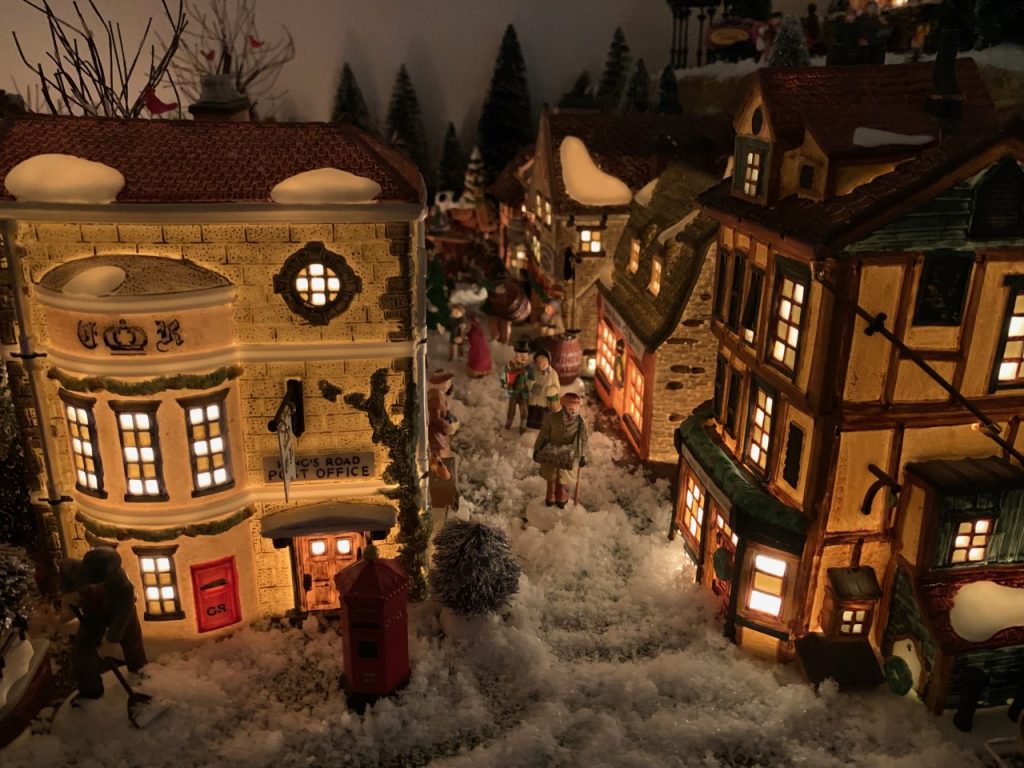 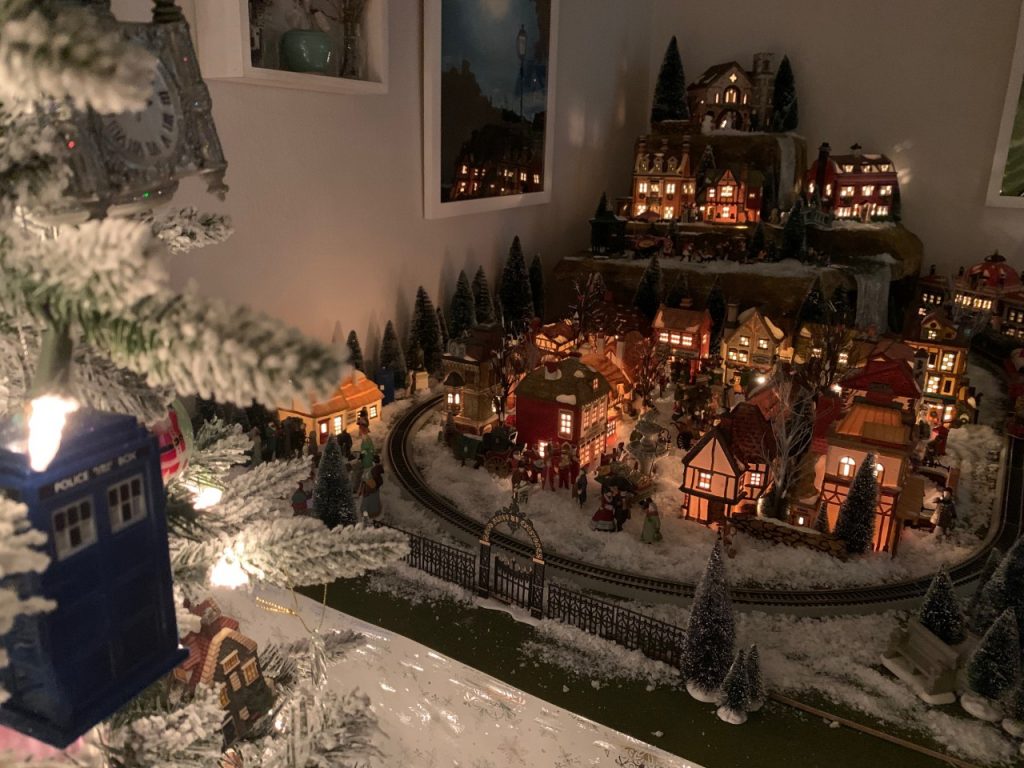 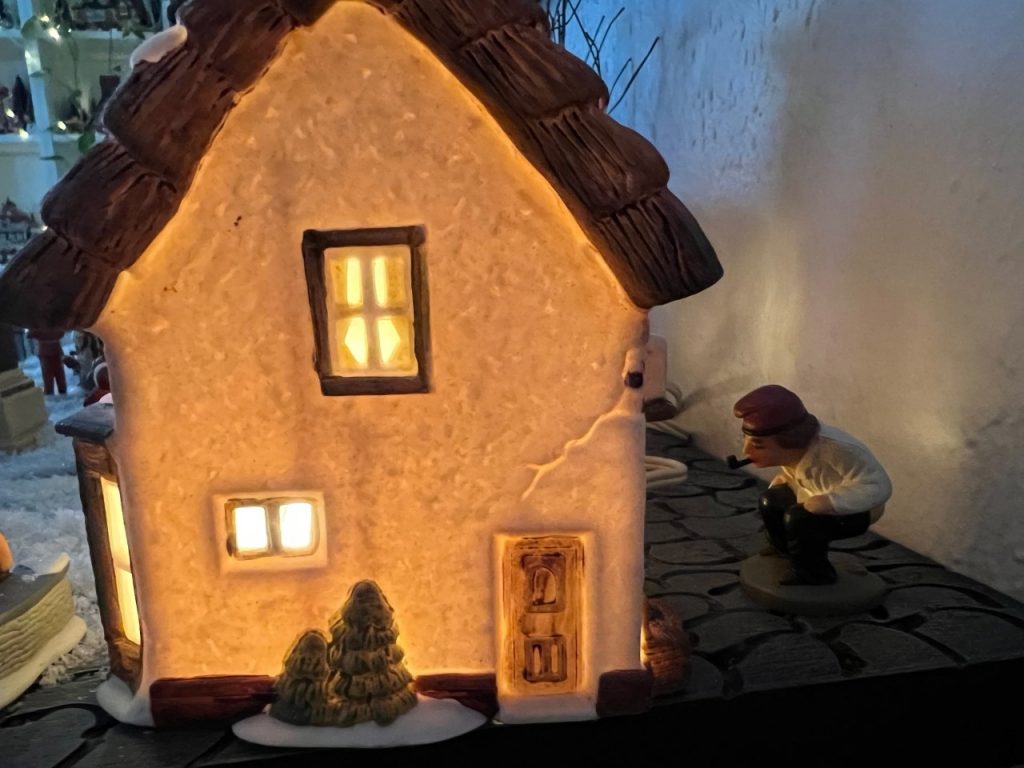 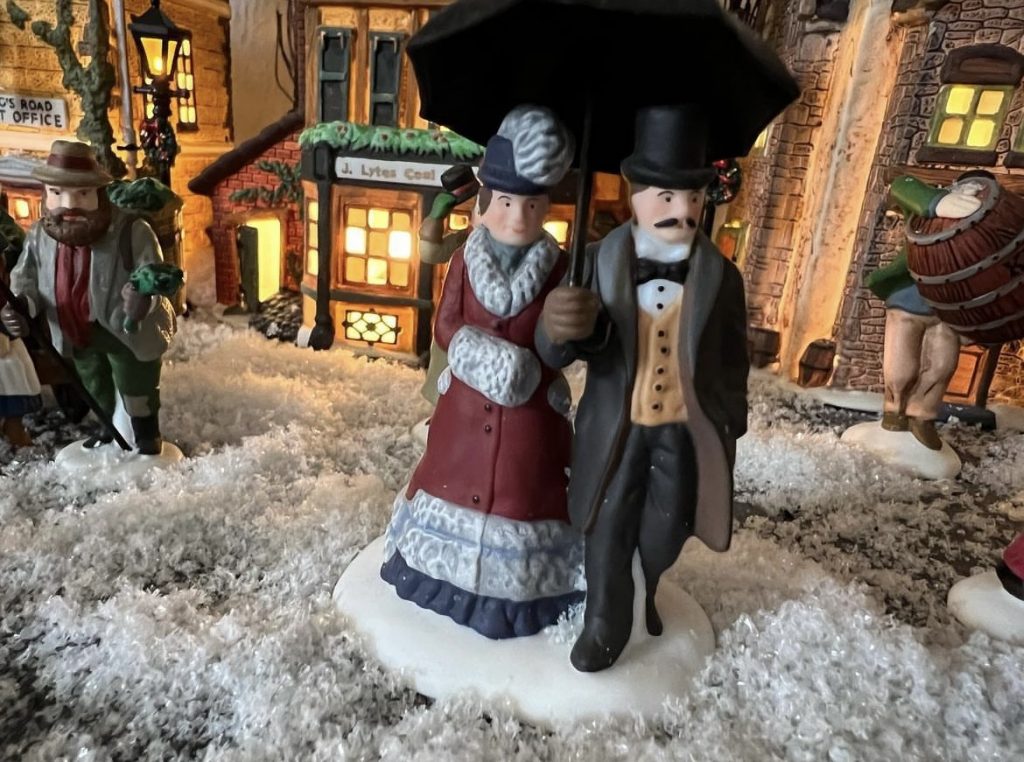 It took me all of one week to realize that small group of Scrooge related buildings were not going to be enough to satisfy my growing hunger for these things. I not only scoured online deals, but started searching thrift stores around the city for discarded treasures that I could add to my growing town. My greatest discovery during this early search was finding an original “Green Grocer” building from the Dickens Village Series for $2.99! It truly got my heart racing. I consider myself lucky that I was an apathetic teenager during the height of the Beenie Baby craze of the Nineties. It would have ruined me.

In addition to the buildings, there are oversized figures to collect. At first, I was unimpressed by them and felt that the village looked more realistic without their gigantic presence. It bothered me that these people inhabited a town that they could not possibly live in. It was an aesthetic choice that I had a hard time getting behind. I eventually got over it and began adding these comically massive inhabitants to the display.

Of course, now that I had people living there, I needed to have public transport in my village. My Christmas train set was perhaps the biggest investment for me, but also the most fulfilling. I had forgotten how much I loved train sets until I got my own. In the Eighties, I had a Transformers set that had disappeared from my memory until the day my village train arrived. 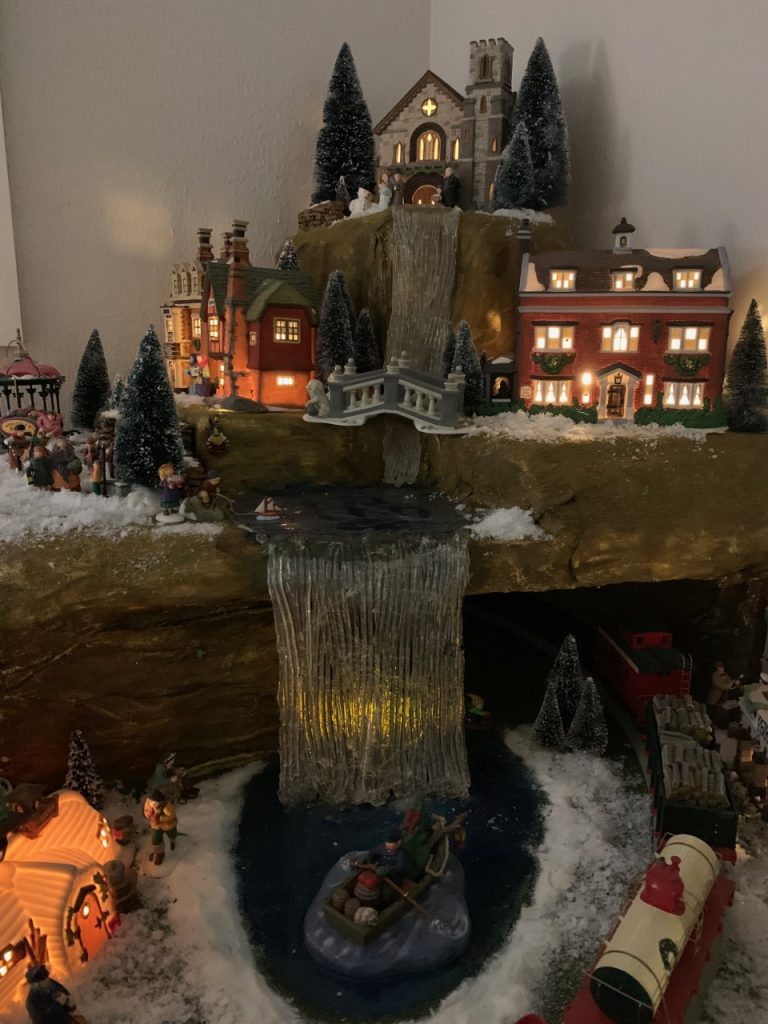 The collecting is only half of the appeal of having a Christmas village. For me, it is almost secondary to the all-important display. This is my fifth year in Dickens land, and it is always different. There are fundamentally two different ways I go about my set-up. I either go for a realistic look or a more stylistic approach. Usually this has to do with whether I will be using the train or not. See, the train has a large footprint, and if I decide to include it, I will undoubtedly be taking up more space than some people in our house are comfortable with. When I do use the train though, I go all out.

Using foam, crumpled newspaper, and plaster cloth, I create a mountain for houses to sit on and the train to pass underneath. There are all sorts of exciting supplies used in the model train world to achieve the desired effect. I apply earth tone paint to the plaster and then glue on different shades of grass, followed by a layer of freshly fallen “snow.” Last year, I made two lakes, connected by a tall waterfall, that the train would illuminate with its headlight as it made its way out of the tunnel.

Sadly, I kept the train in storage this year, but I made the most of it by making a cobblestone platform and setting up what I felt looked like more of a traditional London Street scene. It had been pointed out to me in years past that London does not have any large mountains or waterfalls.  The rest of my collection sits underneath my tree and on various bookshelves. It looks nice, but I can tell that they miss being together.

I consider myself a Dickens purist, but I occasionally veer away into other collections. A couple of different companies made “It’s A Wonderful Life” villages years ago and I have a couple of those, along with some figures. I also have the Simpsons Kwik e mart. The weirdest random piece I have though, has to be the Caganer, or, “The Pooper”. He is a traditional Catalonian figure that, as the name suggests, is defecating. I hide him somewhere in the village every year. My wife hates him. My five-year-old loves him.

At this point, I cannot imagine a Christmas going by without having some sort of village display. It is only mid-December and I find myself already planning for next year. I have already warned everyone who will be affected that the train will be out, and the village will be a hulking beast, taking up most of our living space for the holidays. At this point, I need a bigger house, so I can shove more Christmas into it. 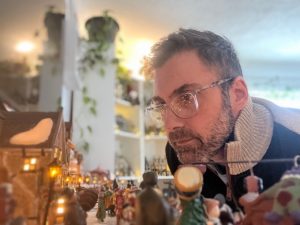