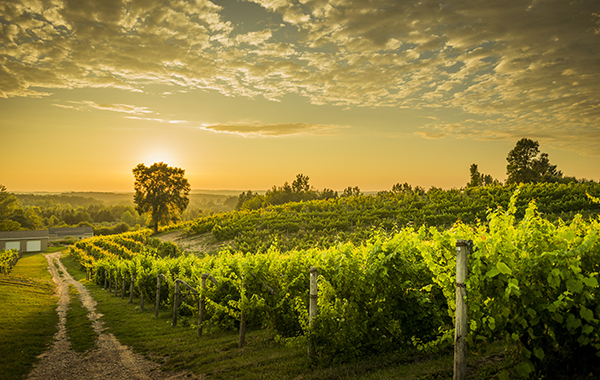 When winemaker Ed O’Keefe looked out over Grand Traverse Bay in 1974 from a high ridge on the Old Mission Peninsula, he saw what no one had seen there before: the perfect terrain for growing Riesling grapes.

O’Keefe’s Chateau Grand Traverse winery still dominates that ridge above the bay, and is still devoted largely to Riesling, the grape that started it all. In fact, it’s the largest producer of Riesling east of the Rocky Mountains.

Today it’s a rare vineyard in the Grand Traverse region that doesn’t devote some of its acreage to this versatile German grape, which can be styled in a breathtaking number of ways – from bone-dry to sugary sweet, without losing its rich fruity perfume. Riesling is now routinely referred to as the “signature grape” of the Traverse City Wine Coast. And it has inspired an annual celebration called “City of Riesling” every summer. (This year’s will be held July 23-24.)

Traverse City is not alone, of course — Riesling is grown all over the world these days, and is one of the world’s fastest growing varieties. It’s loved by chefs, sommeliers and wine professionals because of its heady aroma, its ability to pair well with a wide variety of foods and a multifaceted personality that changes briskly according to the soil and climate of whatever region it’s grown in.

Riesling comes in so many styles that it can be paired well with almost any type of food — dry Rieslings with seafood, poultry and pork, medium Rieslings with smoked fish, salty cheese and spicy Asian dishes, sweet Rieslings with blue cheeses and fruit desserts and foie gras – but always retains its instantly recognizable character. And a well-crafted Riesling with its balanced acidity and lower alcohol level is more refreshing (especially in hot weather) than most other wines.

There’s no secret to the success of Grand Traverse Rieslings – just look at a map. This area lies smack dab on the 45th Parallel – roughly the same latitude as Germany, and similarly buffered against extremes of heat and cold by the local glacial lakes that surround it. The result: crisp fruit-forward cold-climate wines that can’t be matched by anything grown in warm-weather regions like California.

In fact, it’s quite possible that the cool hillsides overlooking Grand Traverse Bay, like similar regions in New York State and Ontario, are starting to produce some of the most perfect Rieslings ever made. That’s the opinion of wine writer Stuart Piggott, author of “The Best White Wine on Earth.”

“I’ve been following developments there since 2000 from a distance and first visited in October 2005,” he writes. “Since then, not only has the area planted with Riesling increased by fully 180% – the fastest growth rate anywhere in the US of Riesling! – but the quality of the wines has leapt into a much higher orbit. There is now a very solid group of producers who don’t need to fear comparisons between their wines and those produced anywhere else on Planet Riesling.”

Four years ago, Piggott joined forces with a diverse group of Traverse City winemakers and restaurateurs – especially Sean O’Keefe of Mari Vineyards and Amanda Danielson of Trattoria Stella and The Franklin — to celebrate the 40th anniversary of Ed O’Keefe’s first Riesling plantings with an event called “City of Riesling.” More than 300 people attended the festivities in Traverse City to taste and compare Rieslings from around the world and learn more about this most fruit-forward of wine wines.

Piggott will be back for the fourth annual City of Riesling celebration this summer, as will wine writers John Haeger (Riesling Rediscovered), and Mike Bennie. The festivities begin Sunday evening, July 23, with the popular “Night of 1,000 Rieslings” where participants can hang out at the Bar of 100 Rieslings, representing major and minor regions worldwide and staffed by a crew of winemakers, sommeliers and owners of Rieslings vineyards from around the world, including Australia, France and Germany.

On Monday, July 24, The Franklin in downtown Traverse City will host “Salon Riesling,” an educational symposium of four one-hour sessions combining curated tastings of Rieslings with analysis and discussion from a range of winemakers, writers and wine experts over a variety of topics. New this year will be a walk-around wine tasting held concurrently and just across the hall from the Salon.

For more information about the 2017 City of Riesling celebration, go to https://www.facebook.com/cityofriesling/