Ok, the Grey Ghost, here we go another dated approach to dining in Detroit, with their milk glass carafes, disjointed Edison bulb chandeliers, their semi-casual and sometimes frank wait-staff and their quite literal approach to the word grey. Some people may have had just about enough of this design aesthetic. But hold on just a moment! Let’s breathe and review before we all collectively leave them out on the curb. K and I decided to dissect what they’re offering before any rash decisions. And whoa – we were right to hold our judgement.

We visited on an early evening, with the sun still peaking over the tops of the nearby loft condos. They have a tiny patio space, with flowers and herbs pouring over the edge of the low garden-box fencing. When we entered, we knew immediately that the patio was where we wanted to sit. And though they seem to use the same carlisle stools that you see in every coffee shop across the country, they executed the open-air ambiance of dining perfectly. Warm woods were sprinkled in here and there to counter-balance the use of grey shades on the interior floors and walls – which ultimately made K and I feel comfortable enough to let loose and order up some cocktails.

I made the call on the drinks while K requested that we start off with the Bibb Salad right away. I was feeling a bit exploratory that evening and thought to try a drink with some beet flavor, while the other drink I reserved to be our classic bet – dark liquor and citrus. The names of the drinks escape me, witty and animated as most cocktail names find themselves to be. Our drinks came out fast and first – almost reminiscent of a gastropubs attention to bar service. 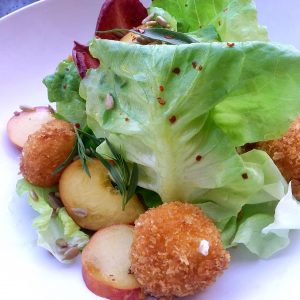 It was, however, simply unexpected when out came the Bibb Salad. Instead of the usual, finely sliced and delicately arranged assortment of edibles – their starter salad was large and exuberant in character and shape. It had a protruding leaf, front and center, which had been dashed with some fresh rosemary, red pepper and unsalted sunflower seeds. Underneath the lettuce the salad had been bedded with soft peach wedges and breaded goat cheese. Overall I found it a pleasant in between, nothing to rave about but certainly worth eating. I particularly enjoyed the warmth of the goat cheese in contrast to the cooling leaves of lettuce. And ultimately it made me hungrier and even more excited for our upcoming dishes than before.

Out next were two more interesting pieces, the Summer Squash and the Parisian Gnocchi. K, amused with the entourage of gnocchi we’ve enjoyed of late, was additionally excited to see that their version was a new, yet modest, reworking of a traditional dish. It was light and fluffy, with more of a mid-meal feel to it than an entrée. I noticed that they were rather small, smaller in fact than what I’d call standard – with a sweeter mellowness that contrasted bright and citrusy versions of gnocchi I’ve eaten elsewhere. The summer squash was also a complete surprise for us. I’ve grown accustom to that idea that when I order something called squash out to eat it is usually fashioned with rich, velvety goodness or sometimes perhaps a bite of pepper or even baked in butter. But their squash was more of a cold salad. After a couple bites K seemed mystified by the cereal texture of something more often thought of as a soft side. They had pan seared raw farro, mixed in some yogurt and then topped things off with kalamata olives. The taste was almost like a traditional American pasta salad but the texture and ingredients were nothing of the sort.

The Grilled Carrots I’ll just mention briefly were tender and almost exotic in their tedious pre-grilling preparation. Though these carrots were merely a side vegetable, the restaurant had taken the time to airtight package them in raw carrot juice, as a way to amplify their flavor profile and make them some of the most lively carrots I’ve ever eaten – a noteworthy trick in the kitchen.

Finally, we decided to top off our enticing evening of cocktails and new adventures at the Grey Ghost with an unlisted Chocolate Sundae – it was splendid. Perhaps we will see you there, pampering your taste buds, next you’re in town? Until then, we suggest to wait and see.

Julien Godman is a contributing writer to The Metropolitan. His co-writer, Lady K, accompanies Mr. Godman on many of his culinary journeys. To read more from Julien please visit his blog Tonic & Juice