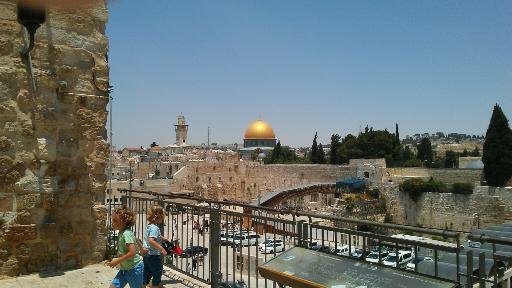 Dome of the Rock

Harry Onickel’s Summer Vacation in Jerusalem (part 3): Or, witness to a terror attack

On July 14, two Israeli policemen were gunned down at the Temple Mount by three terrorists who were then killed by other policemen. The terrorists, with a little help from their friends, had smuggled guns into the Al Aqsa Mosque (the recently declared third holiest site in Islam), from which they launched their attack.

In order to understand the attack and the reactions, we need to look back at some historical tidbits. So here is some barest of bare-bones history.

According to Jewish tradition, the first Temple was built by King David’s kid, Solomon, around 3000 years ago. The Babylonians destroyed it in 586 B.C.E. The Second Temple was built 70 years later. That one was destroyed in 70 AD due to the Jews’ unshakeable – yet wrong, as it turned out – belief that they could defeat the Roman legions.

The Romans left standing one of the outer retaining walls, which is now known as the Kotel or Western Wall. While the Temple Mount is considered Judaism’s holiest site, the Kotel is the holiest site at which Jews are allowed to pray. 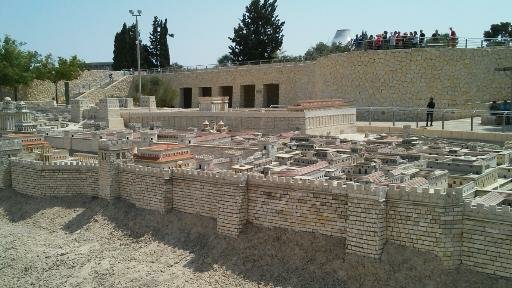 Scale model of the Old City prior to Roman’s “urban renewal” program in 70 AD. The ancient Jewish Temple rises above the rest of the city.

Muslims conquered Jerusalem in 638 and built the Al Aqsa Mosque and the Dome of the Rock on the temple-less Temple Mount.

On May 14, 1948, after being absent from the world’s stage for almost 2000 years, Israel was reborn. It was immediately attacked by five Arab armies. But, what do you know? Israel won. Jordan however, gained control of E. Jerusalem, site of the Temple Mount and Al Aqsa. Jordan forced all the Jews out and forbade them access to the Kotel and all other holy sites, at least the ones they didn’t destroy.

After winning the 1967 War, Israel reunited Jerusalem. Not only did Israel allow universal access to all religious sites, but in the interest of peaceful coexistence, they handed control over the Temple Mount to Jordanian Islamic authorities. Israel would be responsible for security, but as we will see, only up to a point and only to maintain Islamic supremacy. An uneasy status quo has existed since then.

And now, back to our story: In response to the terrorist murders, the Israeli government shut down the Temple Mount for two days in order to check for weaponry and assess whether the killers had inside help. They also installed new metal detectors. Previously, they were only installed in one of the eleven gates, the one open to non-Muslims. Now, all gates would be equipped.

In protest, Muslims were urged to boycott the Temple Mount. They did. Rather than pass through metal detectors in order to attend traditional Friday night prayers, thousands of Muslims prayed in the surrounding streets. This enabled a group of Jews to recite the Mourners’ Kaddish for the murdered policemen (who were Druze) on the Temple Mount. Jews (and all non-Muslims) are forbidden from praying there, but for a brief time, there was nobody to stop them.

Islamic authorities, joined by Hamas and the Palestinian Authority, protested the new security measures. They denounced Israel for “altering the status quo”.

There were calls for “a day of rage.” Some took the call. There were violent protests in Jerusalem and in the West Bank. Police were attacked with firecrackers, rocks, and Molotov cocktails. People were injured. Four Palestinians died. One young Palestinian fellow took the call more seriously. He murdered three Jews as they sat down to their family’s Sabbath meal. He was shot before he could murder the whole family and was then taken to an Israeli hospital for medical treatment. According to his Facebook page, he did it in support of Al-Aqsa.

He is not the first to murder Jews for Al-Aqsa. Every once in a while, in reaction to Israeli government proposals regarding Old City holy sites or for no reason at all, Palestinian leaders accuse Israel of wanting to destroy or desecrate the Al-Aqsa Mosque. Like chum to sharks, it riles up the masses. It almost always leads to violence.

More history: The first modern call to “defend” Muslim holy sites was put out by the Grand Mufti of Jerusalem, Haj Amin al Husseini in 1928. Further calls for violence – uh – I mean defense, were put out after Israeli attempts at improvement or repair of adjacent archaeological sites or infrastructure in 1987, 1993, 2004, and 2007.  “Defend Al Aqsa” campaigns were declared by Palestinian leadership in 2014 and 2015. Palestinian Authority President, Mahmoud Abbas’ declaration that: “The Al-Aqsa [Mosque] is ours, the Church of the Holy Sepulchre is ours, and they have no right to defile them with their filthy feet. We will not allow them to, and we will do everything in our power to protect Jerusalem.” led to violence and death.

As we can see, metal detectors or not, there is always an excuse for rage. The murder of the policemen was celebrated. Abbas along with Hamas, called it a heroic act. The murderers were lionized as heroes and martyrs. The connection between the murders and the new security measures were loudly and angrily ignored.

“Abbas’ message was spread in the United States. Imam Amar Shahin of the Islamic Center of Davis, California gave a sermon on July 21 (shared on Youtube until it was exposed to the larger public and some of the Arabic portions translated into English) featuring such peaceful quotes as, “liberate the Al-Aqsa Mosque from the filth of the Jews” and “annihilate them down to the very last one.  Do not spare any of them.”

Part of the ICD’s weasel-word almost-apology blamed the outburst of hatred on the injustice of Israeli authorities trying to improve security – uh – I mean desecrate the Al Aqsa Mosque.

Almost nobody paid attention to Shahin’s sermon of the week before in which he prayed, “liberate the Al-Aqsa Mosque from the filth of the Jews.  Oh Allah count them down one by one and destroy them down to the very last one.  Do not spare any of them.  Oh Allah, destroy them and do not spare their young or their elderly.”

Then there was Sheikh Mohmoud Harmous’s sermon at the Islamic Center of Riverside in California that was never acknowledged by mainstream news sources. Repeating a favorite conspiracy theory, he accused the Jews of not only trying to take over “Palestine”, but also of plotting to gain sovereignty over Mecca and medina. He too offered excuses for his anti-Semitism. Shouldn’t there have been Charlottesville style outrage over these sermons?

Some news sources weren’t sure how to portray the original attack. AFP reported, “Palestinians shot dead by Israeli forces at Al Aqsa Mosque.” The New York Times’ original story headline read, “In Jerusalem, Gunmen Stage Brazen Attack Near Temple Mount.” The Washington Post rewrote history rather than accurately reporting the story. To the BBC’s Tim Wilcox, the entire controversy was Israel’s fault, and in a raging interrogation of Israeli deputy foreign minister Tzipi Hotovely, Wilcox seemed to have forgotten the murdered policemen. And as far as I read, not one news source questioned whether storing weapons in a holy site or murdering someone with weapons stored in a holy site is considered a desecration. Neither did they ask if the murderers changed the status quo.

After Israel removed all of the new security measures, Palestinian leaders declared victory but continued to call for boycott and rage. Since then, the manufactured fury has died down and the news cycle is now able to concentrate on professional football.

In spite of the need for security and the fact that there are no complaints about metal detectors at the entrance of holy sites all over the world, this tiny portion of the world is different.

In a previous essay, I told you that Jerusalem, in some ways, is unlike any other city. This episode and its aftermath is an example of that difference. Nothing like it could happen in any other city. Jerusalem is the capital of the world’s only Jewish majority nation. It is coveted by people who reject the Jews’ right to sovereignty. That’s why this cannot be seen as an isolated incident. It is a battle in a larger war against Jews and Israel. Many people, not just Palestinians, are outraged that Jews, who are supposed to be submissive and downtrodden, have built this wealthy, thriving nation and made the desert bloom in spite of the constant attacks against them.

For them, this war will never end.