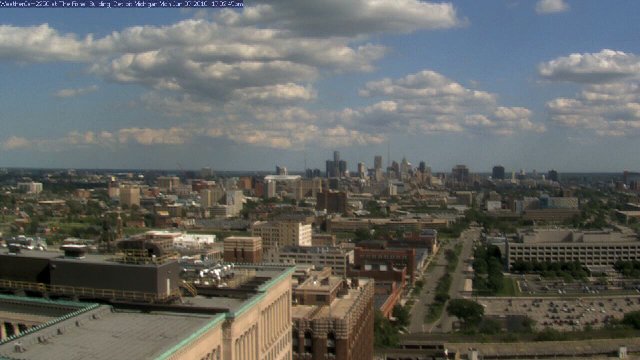 Susan Goethel Campbell’s 2010 video work, Detroit Weather: 365 Days was recently acquired by the Detroit Institute of Arts (DIA), and was on view from November to April. I saw the work a day before it closed, in a dimly-lit room nestled between the Rivera Court and Ancient Greece & Rome. At the time of the visit there was an unexpected soundtrack to the video in the form of the Sirius Quartet performance in the Riviera court.

Detroit Weather: 365 Days, writes the DIA, is a “two-channel video [which] comprises thousands of still images taken every minute, 24 hours a day, for one year, enabling the viewer to see how weather patterns come and go and move in all directions.”

The three views that we get come from cameras installed on the 22nd floor of the Fisher Building, and we see Downtown, southwest Detroit, with the bridge, Rouge Plant and Marathon refinery, and east Detroit with the incinerator, the river and Lake St.Clair.

At any one time, the sped-up, ninety-minute video is shown in two of the three angles, each taking turns switching to the other part of town. Thankfully, the dates and times do not correspond in the two projections, so there are different weather patterns and times of day showing in each.

There is a weird enjoyment to be had from these types of works. The weather is usually an interesting topic and, after all, how often do we find ourselves making small talk in an elevator or at the counter by saying something about it? Weather is a common denominator, as it touches us all and affects across all other concerns. (There is even such a thing as an addiction to the Weather Channel). When sped up, weather footage can also have its magical and unsettling moments.

In Susan Campbell’s work those moments include the unusually quick movement of celestial objects, the sudden directional changes in the paths of clouds, and the hasty arrival and departure of storms. At the same time, the video is as much about Detroit as it is about the atmosphere. All of the views are roughly half sky and half city, and the activity in the streets, shadows and smokestacks compete for our attention. Also, the occasional reflection of a computer screen inside the room housing the cameras serves as a welcome reminder that this is a working space. Caspar David Friedrich this is not—there are no Romantic notions of the tininess of humankind in the face of nature. The feel is more of raw data, so much so that I can’t even recall having a single thought about global warming while watching the work, and that is a rare thing these days.

Detroit Weather is essentially nothing new in concept. The 1982 film Koyaanisqatsi comes to mind, with its sped-up views of everyday life, as well as the Weather Channel’s days-long footage of snowstorms condensed into a minute. But the time-frame of the video is impressive, and the work reveals a genuine interest in meteorology. It also works well when exhibited next door to Rivera’s murals, as it offers a contrasting image of the city.

This brings us to the last point, concerning the DIA: why not make it permanent? How about reworking the room into a black box and trying to project all three parts? A couple of curtains for soundproofing? Certainly, a world-class museum can do better.

Clips of Detroit Weather: 365 Days can be seen at www.susangoethelcampbell.com

On April 8th, the Whitdel Arts crew came to hang the member and emerging artist shows. What they found was a new lock on the gallery’s door. SW Solutions informed them that the space is now “under new management” and that they will have a day to remove all of the art and gallery equipment. In all likelihood, this was a hostile takeover from a former colleague with connections to SW Solutions. Either way, the gallery will no longer be at 1250 Hubbard, and whatever will occupy its space will not be called Whitdel Arts.

Inner State Gallery and Corktown Studios were kind enough to host the two shows, but at the time of writing it is unclear where future exhibits will take place. This is a loss for southwest Detroit, and SW Solutions is to blame.