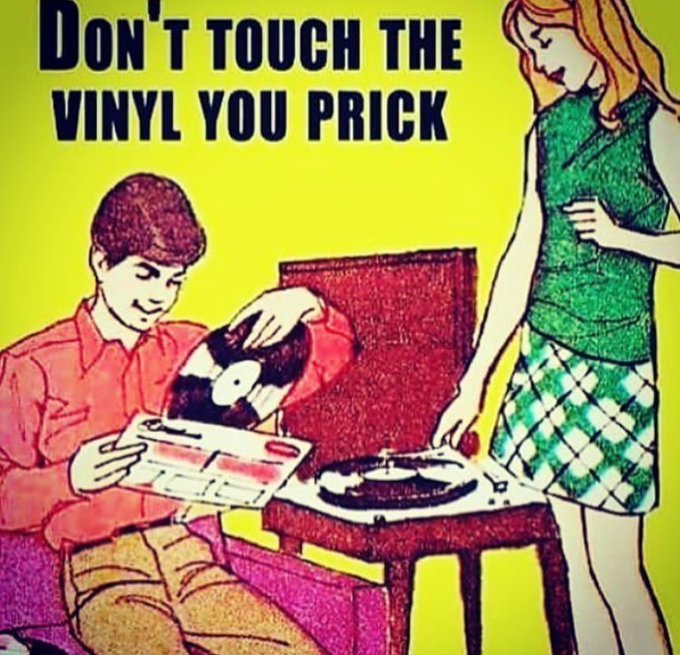 I understand that TV shows, even when they are depicting an aspect of real life, aren’t always concerned with accurately portraying real life. For example, I walked in on my wife watching an episode of the current “Sex in the City” series, which she informed me is now called “And Just Like That.” Sarah Jessica Parker’s character was enjoying a romantic evening with her paramour. She pulled a record off the shelf and read the title to him. He approved, and she pulled the record out of the cover. That’s when the trouble started. She grabbed it right out of the inner sleeve with her hand and began waving it around like it was a frisbee or a tostada shell, nonchalantly getting fingerprints and oils all over the grooves. It was an outrage!

It was clear in this scene that the gentleman friend (or whoever he was) was a collector. He had hundreds of albums neatly stored on the shelves and quite an impressive, expensive looking turntable and amplifier. The was not the Close-and-Play of our childhood. This was what looked like a well thought out hi-fi set up that would be purchased by a serious long-time record collector who delights in getting the best possible sound out of those tiny, fragile grooves, and who probably bought his first record in his early teens with money squirreled away from an after school job, and who, like me, would be outraged if someone handled one of his records like an over-sized Ritz cracker or a piece of matzoh.

I expected him to stagger back, mouth wide open, clutch at his heart, and after taking a moment to recover, throw this blasphemer out of his apartment, or at least show her how to properly handle a record. But he didn’t. He didn’t weep or gnash his teeth. He didn’t fall to his knees. No. He began seranading her, singing along with the record as if he didn’t even care that his treasured LP had just been degraded.

This was surely written as a touching romantic scene with the records serving as atmosphere. I’m sure other romantic stuff happened in this scene, but I couldn’t process it. All I could think was, what kind of sick, gratuitous, anti-vinyl fantasy is this? 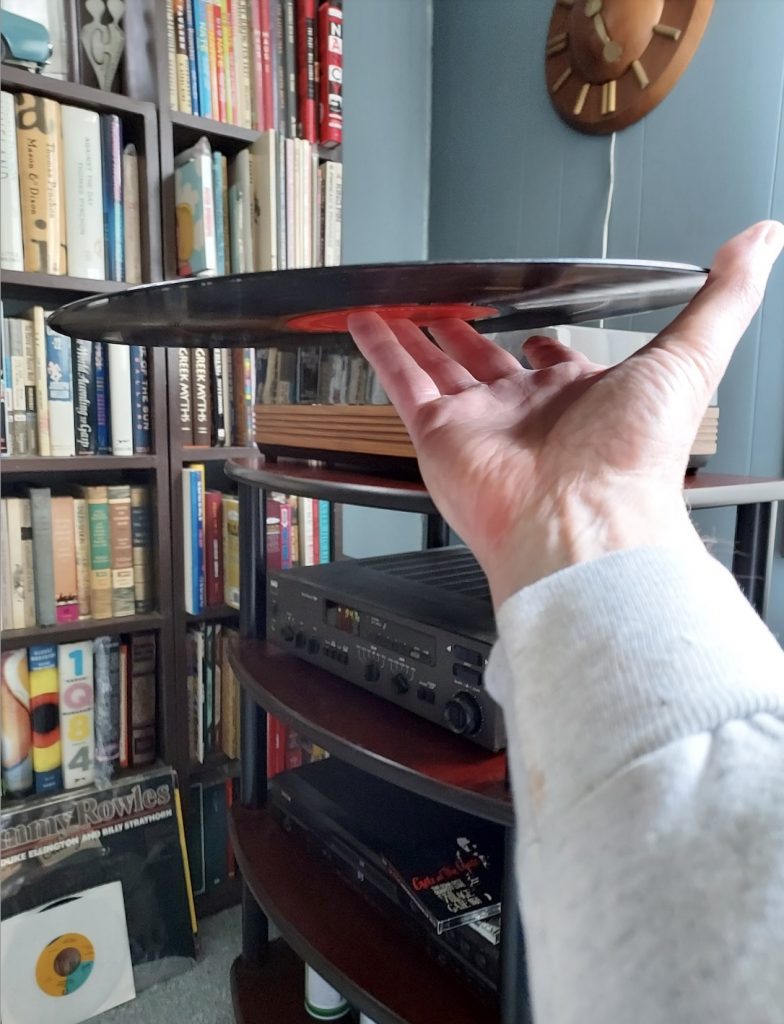 Harry Onickel demonstrates how to properly handle a record

“Keep your oily, vinyl-destroying fingers off of the playing surface”

It’s true. What’s never taught in schools is that the main reason for humanity’s 5,000 year-long technological progression is the development of the long-playing record. From the taming of fire and the domestication of draft animals, through the industrial revolution, to the rise of the information age, mankind’s one clear goal was the creation of a music storage device that could also release the music into humanity’s ears. The flat, black, circular slab of polyvinyl chloride is the result.

Also keep in mind that the wheel had been used to create pottery for hundreds of years before someone had the afterthought to use it for transportation. The potter’s wheel is the precursor to the modern turntable.

Architecture too, advanced in the service of vinyl. The only reason to build a weather-proof, climate-controlled, permanent dwelling is to house one’s record collection and protect one’s stereo system from harm. Humans have lived in non-permanent and portable dwellings made of various substances for much of our history. This was ok in pre-vinyl (aka PV) days, but it just isn’t acceptable today. People began building out of wood, brick, and stone because within the collective unconsciousness was the knowledge that one day structures would be needed that could safely protect record collections.

Motorized vehicles were created in order to transport records. The harnessing of electricity was done so that we could play our LPs. Gutenberg built his printing press as a first step in creating album covers. Thomas Edison invented the phonograph in 1877. In 1879, he perfected the incandescent lightbulb in order to allow collectors to read liner notes at night and in windowless rooms. Our entire modern industrial society was built to serve the needs of the vinyl record. Every other advantage we realize from our modern society is ancillary to our records.

All of this brings us to you, the vinyl afficionado; or perhaps you’re only vinyl curious. Either way, I am not here to tell you how to listen to your records. I can tell you however, that we are currently in the midst of a new “vinyl age.” Old vinyl can be found in record stores, thrift shops, estate sales, and on the Internet. New vinyl is being produced, and it is being done with care and craftsmanship that was rarely considered in the past.

Today’s record buyer has many choices when it comes to picking up old records. If you don’t mind varying degrees of snap, crackle, pop, you can go scavenging for cheap records that may have been mishandled and played on crappy turntables for years. You can also scour the world for pampered, pristine copies of the same records that have only known gentle handling, regular cleaning, and expensive, well-maintained turntables, and that cost hundreds or thousands of dollars. You can buy beautifully remastered, limited-edition albums on heavy vinyl, packaged exactly like the original pressings. Even better, you can buy deluxe editions that, in addition to being lovingly remastered, also come with various “extras” designed to separate you from even larger amounts of your disposable income.

Going a step further into the “limited remastered” realm, there are new 45 rpm releases of some of the old 33 1/3 rpm albums. We’re told that the increased rpms create a sound that is even better than the originals. I don’t know. I haven’t heard any of them. I predict though, that the next step in improving a record’s sound will involve specially trained technicians who will “press” each record individually by digging the record’s groove into the record using soon-to-be-invented miniature tools. This will, of course be a very expensive, time-consuming process that will add to the cache and the expense of the record. It will give music lovers new topics of discussion on Steve Hoffman Music Forums.

Current bands are putting out new vinyl releases produced with the same care as the remastered old stuff. No record company today would even consider putting out the floppy, thick-as-a-paper-plate releases we used to buy in the 1970s and 80s.

One thing you must remember, whether you go for cheap yard sale records, current releases, or expensive remasters and rare original recordings, is to keep your oily, vinyl-destroying fingers off of the playing surface. You hold a record by letting the label rest on your upraised fingers. Your thumb supports the record on its edge. You place it on the turntable with two hands, the fingers of both hands gently holding the record on opposite sides. You lift it off the same way. It’s simple. Even a big-time TV star could do it.

Speaking of TV, I’m not sure what happened between the time I watched the soul-shattering scene mentioned above and the time I regained awareness of my surroundings, but when awareness returned, the pain in my foot immediately drew my attention. It was swollen and bleeding. I only needed a few stitches, and the bones will heal in a few weeks. The TV though, shattered as it was, will have to be replaced. My wife claims there is a connection between the broken TV and my broken foot. She might be right; I’m not really sure. If my memory returns, I will let you know. Meanwhile I’m going to be sitting around listening to records.