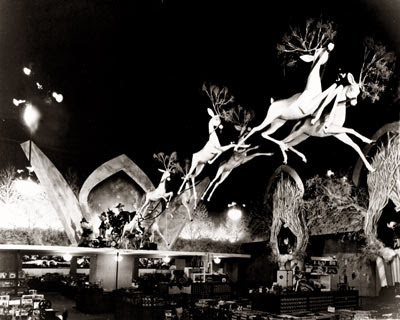 In your writer’s lifetime, he has experienced the glorious growth and indignant demise of one of Detroit’s premier retail department stores, Hudson’s. Numerous books, articles, and Motor City resident testimonials have recorded the history of this Grand Dame emporium.

Joseph L. Hudson founded the shopper’s magnet in 1881. Since its founding in the old Detroit Opera Building, Hudson’s had grown to a multi-story building (some say 25, others 28 stories) occupying an entire city block. Over time, Hudson’s expanded its operations into suburban Detroit, starting with an anchor store at Northland Center, Southfield. As Hudson’s began in an Opera House, it may be said that the “Big Lady” sang twice regarding Hudson’s fate, once with the implosion of the headquarters store in Detroit, and the second with the closing of the Northland store (soon to become rubble with the announced clearance of the Northland Shopping Center, designed by architect Victor Gruen). However, it’s really not “over” because the store’s reputation of quality and service lives on in our memories.

Readers have many memories about the iconic building…its first Thanksgiving Parade, where the incumbent mayor would hand Santa Claus Detroit’s Key to the City, as well as the hearts of children everywhere… and the marvelous Christmas department store windows that entertained children and beckoned eager shoppers inside.

In the end, the long-vacant Hudson’s Building, owned by the City of Detroit’s Downtown Development Authority (DDA) was cleared to make way for redevelopment. Your writer was present during the implosion of the Hudson’s Building.