When Josie Pace enters Public House, a hip neighborhood joint in Ferndale, renown for spinning full sides of vinyl along with its artful menu, all eyes look her way. She wears a tightly fitted, black outfit, spaghetti straps clinging to her chest, accentuated by a silver skull necklace, that is wrapped within a black and blue checker patterned blazer, spikes punched DIY through the shoulders, with a pair of mile high platform boots elevating her tiny frame to nearly six feet. But, it’s Josie’s platinum white Mohawk, worn with complete confidence, that catapults this fashionable singer/songwriter to the height of proper Rock Star.

Josie’s band mate and producer, Ken Roberts – formerly of Charm Farm, a Detroit-based disco, glam band that earned a fair amount of recognition in the 90s – has been sipping diet coke at the bar, talking up bands, clubs, and the current state of the music industry for half an hour. Initially, his choice of beverage doesn’t seem too Rock Star, but when a musician has been in the game for 15 years one learns to eliminate what no longer works.

Roberts was in pursuit of an artist for some time, auditioning several local prospects, including a “well-known female pop singer” who flew in from Los Angeles but, according to the producer, none of them seemed to be the right fit.

“Everybody was just … not terrible, not believable,” said Roberts. “Believability is the biggest thing.”

“I was blown away,” said Roberts. “Blown away, because, I actually fucking believed her.”

While Josie is trained in Classical and Jazz guitar it wasn’t her musicianship that impressed Roberts as much as the the fact she wasn’t “over-singing”. Unlike most contemporary vocalists, who Roberts says “watch too many talent show competitions”, Josie had the ability to combine “emotion and chops”, much in the vein of Sinead O’Connor or Annie Lennox.

Roberts also thought Josie “looked great”. Both of them are crazy about fashion, btw. So, I suppose now is a good time to mention that Ken is stylishly attired, suited and booted, in black, coiffed and polished. 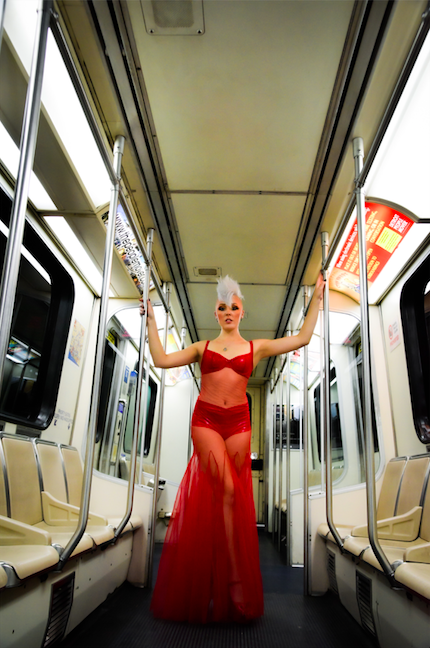 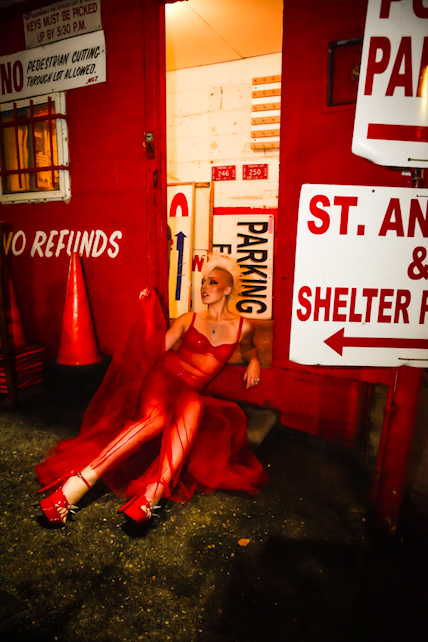 “I bring songs into the studio, we record, then Ken turns it all into a giant electronic mess …” ~ Josie Pace

When the musicians finally got together in studio Josie broke out some classic rock, pulling selects from her favorite band the Eagles, along with various covers through the decades. But, Josie didn’t want the “Alternative Folk Artist” tag, and Roberts found the Web filled with millions of those already, so the producer floated an idea the duo drop all guitars in favor of a heavy, synth-pop sound.

“You’d be surprised how in this day it’s still difficult for a band to work clubs without guitars,” Roberts said. “Some sound guys will just be ‘assholes’ during sound check.”

Depeche Mode, who happens to be spinning in the background, was one of Robert’s favorite bands. He remembers them taking a lot of flack. But, he loved the sound and the fashion of the era, also citing Bowie and Duran Duran as major influences.

Josie writes all the material on an acoustic and then brings the songs into the studio where Roberts “turns it all into a ‘giant, electronic, mess'”. And, then Josie and Roberts work from there to achieve the sound Josie Pace has developed over its tenure.

“I think that’s why I like what we’re doing verses many of the bands who have a similar sound,” says Roberts. “Most industrial bands start with a computer, do something electronic, and then they sing over it. Whereas, we do what Depeche Mode does; Martin Gore sits in a room with his guitar and writes Personal Jesus, and then he comes to the studio and they turn that into a song that can be stripped all the way back to an acoustic.”

Rounding out the band is drummer Mark, a long time friend of Roberts, who delivers tracks from Los Angeles when he’s not flying in to record, appear in videos, or  perform in shows. 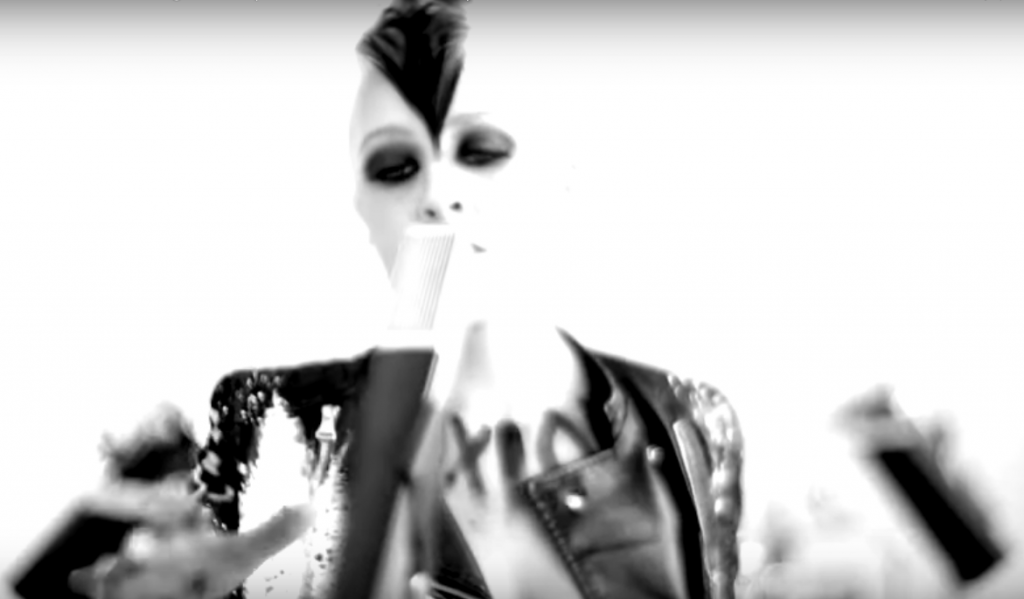 A number of very slick Josie Pace videos appear Online, conceived by the band, directed by Roberts, that of course feature the group’s singles, but also explore Josie’s artistry with makeup and wardrobe, a major component of the overall aesthetic, pulling from the runways to create visuals a bit more inspired by Alexander McQueen than the bondage gear found at Noir Leather.

The needle drops and Head Like A Hole pushes its way through the sound system. While much grittier than Josie Pace record shops might place both bands in the same section. But, it wouldn’t surprise me to find Josie alongside Lady Gaga and Pink. And, that’s the trick, isn’t it – filtering our influences in an effort to come up with something new and, perhaps, most importantly, relevant to an audience.

Roberts current business philosophy for reaching that audience is to release a single quarterly, accompanied by a video, then let kids download Josie Pace at .99 a pop.

“I actually stole this idea from Billy Corgan,” Roberts said. “You put out a single every two to three months so that you’re out there fresh, again, again, again.”

While the band plays Michigan – The Loving Touch (Ferndale), Smalls (Hamtramck), The Machine Shop (Flint) – they’ve found the most support in L.A., headlining venues like Bar Sinister, with one of the biggest goth scenes in the country.

“If we’re going to do a show there has to be a good purpose,” Roberts says. “Playing a show just to play a show in this day and age is not worth it. We opened for Powerman 5000 in Flint, for example, and later they came to see us in L.A. so that made sense.”

The difficulty of funding and promoting a band is something we’ve heard at all levels. In many ways, the Internet has made music more democratic but then there is all of that noise to cut through. Bands must determine the value between gigging steadily against making videos, or traveling to cities where they’re known. Without label support artists finance their own operations. But, then this is the way it’s always been, and I suspect the way it will always be. Artists across all mediums must learn to navigate the landscape.

“I’m so sorry …” Josie says, as she approaches us at the bar.

Her voice is soft, her smile genuine. Rather than play “fashionably late”, as is the case with some in her profession, Josie seems almost embarrassed at the possibility of inconveniencing Ken and I, who have been lost in a rather good conversation.

We move to the back patio. A vintage camper operates as the bar. Josie tosses a skull handbag on our table. A Christmas gift from Ken last year. They both laugh.

“I found that online in creepy places,” Ken says.

For the record, Josie gave Ken a leather and silver bracelet for his birthday that bears the name ‘Synth Master’.

“That’s what he calls himself,” Josie teases.

Like many kids, Josie began expressing herself in high school wearing, “pink, furry, cardigan vest things, going from bad grunge, to emo, to an almost emo hip-hop style, shaved head on one side, a Bob on the other …”

She always wanted to be a Rock Star.

“I got no fallback right now, so this better work out,” Josie laughs. “I have nothing.”

Josie said her songwriting comes from a very personal place, her vinyl collection includes Depeche Mode and ‘Dookie’ by Green Day, and that she gets all of her music by listening to the radio, which comes to me as a bit of a surprise.

“I really don’t have time to stream through it all,” she says. 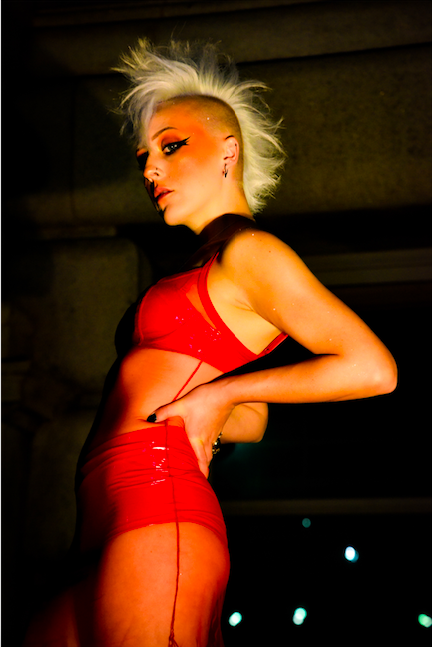 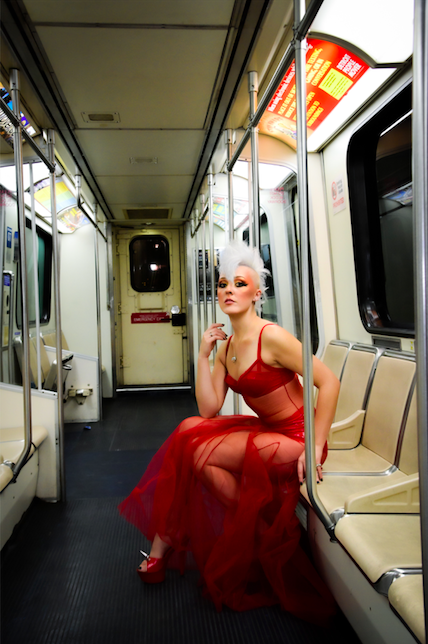 The dynamic between Josie and Ken is interesting. As a veteran in the game Ken operates as a musical mentor, introducing various bands that he deems essential. On a field trip to Dearborn Records, Ken led Josie through the annals of rock using New, Used, Reissued, and $1 Bin records as a visual aide. He explained that while Velvet Underground’s first album didn’t sell that well record companies are still reissuing them today.

Conversely, the protegé brings new perspective from her influences, adds professionally trained musicianship and strong vocal abilities, then wraps it all up in a fashion forward package that forms the perfect front for this synth powered duo.

Josie and Ken bounce music and bands off one another like a couple of old friends. They crack jokes and tease in a very familiar way. If Sonny & Cher and the Eurythmics had a love child it just might be Josie Pace.

As a songwriter, however, Josie said her lyrics come from a very personal, sometimes, very dark place. Rather than being direct she writes in an abstract form to address subjects that affect her emotionally. The song Cannibals, for example, is about the passing of her grandparents.

“Listening to it I’m not sure anyone knows what it’s about, and that’s how I want it,” Josie says. “It means something to me and I want it to mean something different to everybody else. I think it’s more relatable that way. I want it to spark emotion and it doesn’t really matter what emotion that is.”

Josie’s process usually begins with a chord progression, a melody, that Josie hums to a little, before writing whatever she finds in her head. She likens the process more to creating sculpture than telling a story, in a therapeutic effort to help her feel better.

“She writes songs in her closet,” Ken says.

“There it is,” Josie laughs, a bit awkwardly.

From the exchange it seems we’ve stumbled upon something that Josie might not feel comfortable sharing at this point, so I do not pursue. However, I am interested in understanding how a typical good day affects her writing verses one that is typically otherwise.

“I think I’m more afraid that I won’t have anymore bad days, because bad days are something to write about,” Josie says. ” But, good days are nice, sometimes, every once in a while … like, a nice, one day, every three months.”

Josie grew up in a conservative, Christian, household. In high school she was “straight-edge” (though, she was not then aware of the term), and states that to this day she does not take drugs or smoke; mostly, to preserve her voice, but also because she’s just not into it.

“I love Prosecco though,” she says. “Do what makes you happy, I guess. Doesn’t matter what it is, as long as it brings you joy.”

“Except for getting a tattoo,” Ken says.

Both of them laugh.

A discussion breaks out between the pair over why Josie should or should not ink herself, which is something the Rock Star has been considering for some time. Professionally, Ken stands against them, saying they are no longer original, citing quotes from Ozzy that supports his position, before reminding us that Bowie never had a tattoo, and Bowie is cooler than everyone else.

Josie stares at Ken a moment. He feels her glare. She turns back to me.

“Do whatever brings you joy …”