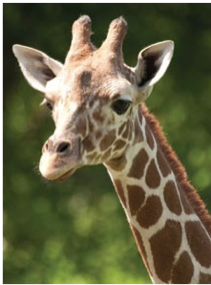 The Detroit Zoo’s newest arrival has good reason to hold her head high. Kivuli, an 8-foot- tall female giraffe who made her public debut Wednesday, is elevating the Zoo’s hope of expanding its giraffe family.

Kivuli, who turned one year old on June 19, was identified through the Association of Zoos and Aquariums as a good breeding match for the Detroit Zoo’s 2-year-old male giraffe, Jabari. The Zoo is optimistic the pair will produce offspring when Kivuli reaches maturity in a few years. The most recent giraffe birth at the Detroit Zoo occurred in 1992.

“Although Kivuli and Jabari are considered a good genetic match, animals are individuals and they don’t come with guarantees,” said Chief Life Sciences Officer

Scott Carter. “We hope they’ll be happy with each other because we can’t help but be excited at the prospect of having a giraffe born at the Detroit Zoo.”

Kivuli – Swahili for “shade” – came from the Albuquerque Biological Park (formerly the Rio Grande Zoo) in Albuquerque, N.M. She joins Jabari, Raspberry, 18, and Chardo, 24, at the giraffe habitat in the African Grasslands.